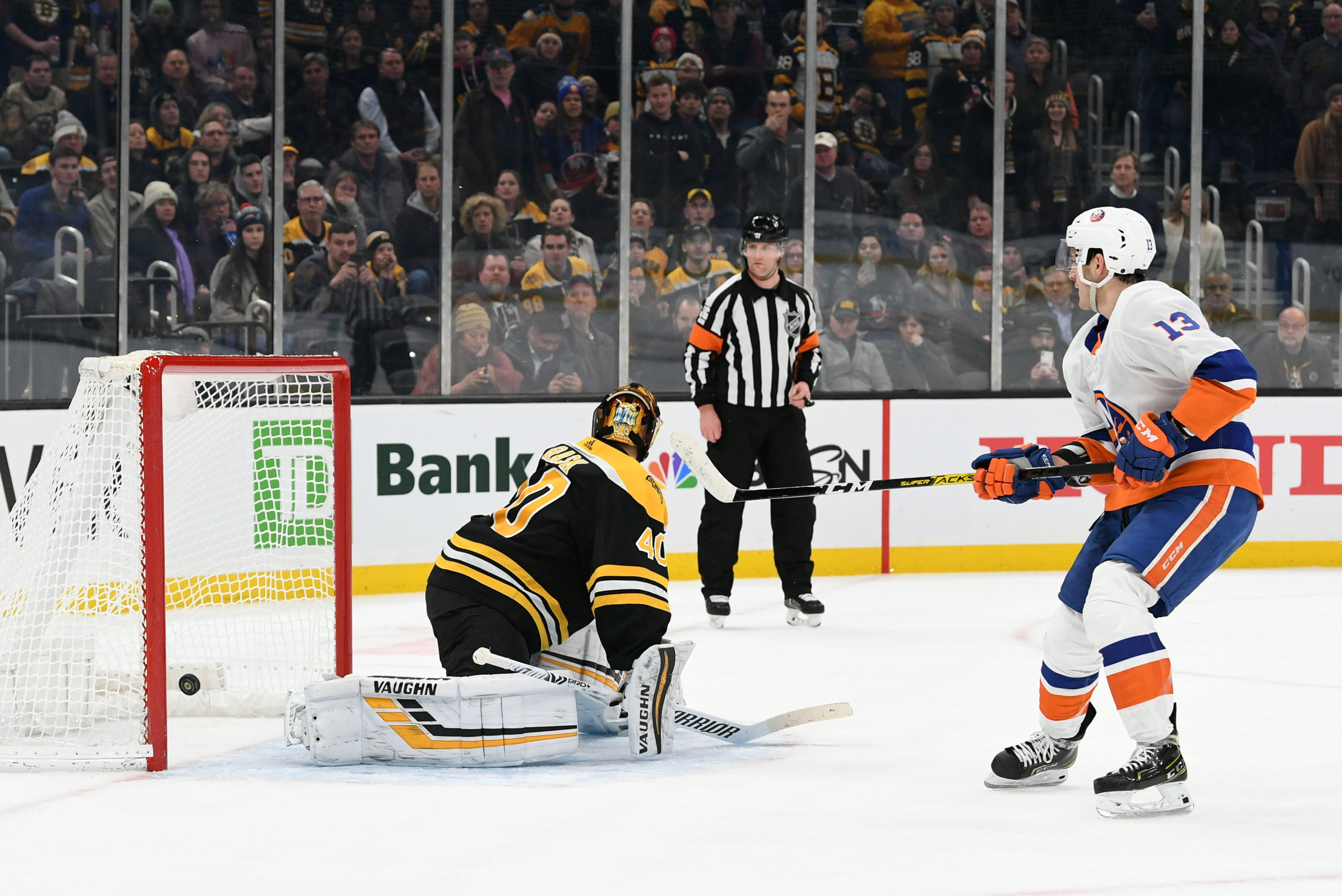 Shootouts Remain a Weakness as Bruins Fall to Isles

Boston, MA – Both the New York Islanders and Boston Bruins entered Thursday night’s game at TD Garden coming off a loss. The Islanders had a 13 point home streak snapped with a 8-3 loss against the Nashville Predators, while the Bruins continued their struggles with a 4-3 overtime loss against the Los Angeles Kings Tuesday night.

Despite the recent troubles, it did not take long for the Bruins to get on the board in the opening period. With just under two minutes in play, forward Anders Bjork went bar-down on Islander’s goaltender Semyon Varlamov to give the Bruins the early lead. Forward Charlie Coyle was able to keep the Isles from clearing their zone, forcing the puck to Bjork who wristed it over Varlamov’s stick side.

The Bruins would have two power play opportunities in the opening 20 minutes; forward Danton Heinen having the best opportunity in front of the net to give Boston a 2-0 lead, but rang the iron instead.

New York would also have their chance on the player advantage 9:09 into the first period as defenseman Connor Clifton was called for tripping, but the Islanders were unable to convert.

The second chance on the power play for the Bruins came late in the period, as forward Casey Cizikas was whistled for tripping with 46 seconds remaining. The power play would carry over into the second period, but were unable to convert.

Former Bruin Johnny Boychuk got the Islanders on the board 3:26 into the second stanza. Forward Jordan Eberle dished the puck along the boards to Boychuk who one-timed it over the glove-side of Tuukka Rask to tie the game at one apiece.

The Islanders would go on to grab the lead 18:26 into the period as forward Mathew Barzal received an across ice pass from Boychuk. The goal was Barzal’s 14th of the season.

While New York was able to gain the lead, the Bruins had many chances in the second period. With 2:22 remaining in the period, Anders Bjork had a wide-open shot down low, but Varlamov flashed the glove, robbing Bjork of his second of the game. Bruins forward Jake DeBrusk had a breakway opportunity a couple possessions late, but Varlamov once again made the stop.

Brandon Carlo committed a tripping penalty with under a minute remaining in the second period, so the Bruins would find themselves on the penalty kill to start the third. They were able to kill the penalty of.

In what was rather an uneventful game up until the third period, the Bruins would find a surge of energy with just under seven minutes into the period, as the Islanders would commit a penalty after penalty. At 6:32 Adam Pelech was whistled for a high stick, only for Brock Nelson to be called for a delay of game 44 seconds later. The Bruins would take advantage of the 5-on-3 opportunity; Torey Krug tying the game at two apiece 7:24 into the final period. David Krejci passed the puck from the lower right circle to Krug who was waiting at the top right circle. Krug was able to wrist the puck past Varlamov for his fifth goal on the season.

“We do a better job at it when we shoot the puck,” said head coach Bruce Cassidy on his team’s third period play. “So, that part of it came around. But, we missed some opportunities early.”

Overtime hockey would not be enough, as a shootout would be needed to determine how this game would end. Eberle scored on the first shootout attempt for the Bruins, while Coyle failed to answer on his shootout attempt. Barzal followed suit, giving the Islanders a 2-0 edge in the three round determinator. David Pastrnak was able to pull the Bruins within one, with Josh Bailey unable to seal the victory for the Islanders on his third-round attempt. Brad Marchand had the chance to tie the round, but was unable to stuff the puck past Varlamov for the Bruins second overtime loss in a row.

Boston has yet to win in a shootout this season, and Cassidy has mentioned that shootouts are practiced at practice, but not every day.

“Some are going to go our way, but clearly it is not a strength of our team,” said Cassidy.

“Every season there are always ups and downs,” said Coyle on how important it is to get back into the winning ways. “Come playoff time, those ups and down help you. This will help us, and yeah we want to get out of it. We have to do it day by day. We do the right things, and just stick to the process.”

The Bruins are set to take on the Nashville Predators this Saturday with hopes to begin a better stretch of games going into the new year. Puck drop is 7 p.m.