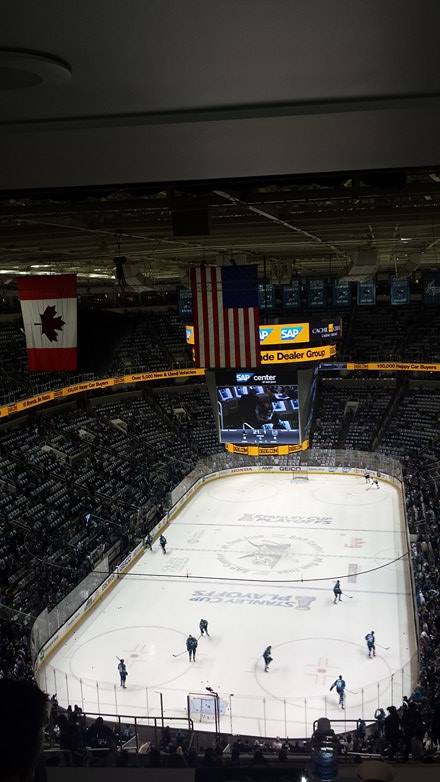 Wednesday was gameday in northern California and the San Jose Sharks were ready to face the Los Angeles Kings in Game 4 at SAP Center.

Things really couldn’t get any better (or louder).

The Tank was ready to turn up in teal. The atmosphere was loud and full of life. All fans in attendance received free rally towels, courtesy of TiVo.

The Sharks played a physical game early with Brent Burns and Melker Karlsson delivering memorable hits. Despite San Jose outshooting the Kings 11-8, they missed several chances and the game remained scoreless after 20 minutes.

Just 30 seconds into the second period, Jeff Carter was called for roughing Marc Edouard-Vlasic, allowing the Sharks to go on their first power play of the night.

On the power play, Joel Ward received a puck from Vlasic and made a cross-ice pass to Brent Burns, who one-timed it past Jonathan Quick to give Team Teal a 1-0 lead at 2:09.

Shortly after, Los Angeles went on their first power play of the night when Matt Nieto was called for tripping Jonathan Quick. Afterward, Joel Ward was called for high sticking Drew Doughty and the Kings received a second power play. However, they didn’t benefit from either man advantage.

Rob Scuderi was called for tripping Tomas Hertl at 8:42, which allowed the Sharks to go on their second power play. Patrick Marleau set up the play, Thornton found Joe Pavelski in front and then he one-timed a shot past Quick for a 2-0 lead at 9:21.

The Sharks went on their third power play of the game when Luke Schenn was called for roughing Joe Thornton, but were unable to take advantage of it.

Despite missing out on a power play advantage, the Sharks led 2-0 after 40 minutes. They outshot the Kings 24-16.

The Sharks opened the scoring early in the third period. Coincidentally, it was their third power play goal of the night. Patrick Marleau found a loose puck and backhanded it past Quick to give San Jose a 3-0 lead at 1:40.

Peter DeBoer challenged a questionable play, but the call stood.

Just 1:09 later, Luke Schenn rummaged a puck with a screen in front, Kris Versteeg received the puck and gave it to Trevor Lewis, who deflected a home goal past Martin Jones. The Kings finally got on the board, reducing the deficit, 3-1.

Marian Gaborik gave the puck to Anze Kopitar, who went all the way back to the blue line. Then, Schenn fired a shot through traffic from the point and beat Jones to make it a one-goal game at 6:44.

The Sharks lead the series 3-1.

The home team was fairly thoughtful about the win.

“It wasn’t something to be frustrated about. Maybe we could’ve done a better job, but I can’t complain,” captain Joe Pavelski said. “Could’ve stopped the forecheck a little bit better, but oh well. . .It’s hockey. You just gotta try your best.”

“I don’t know if it carries over game to game,” defenseman Brent Burns replied when asked about consistency. “I provided a good start because I shot the puck first.”

“I think a couple of things happened. I think the group felt like they could’ve won the last game, so they cashed in on the power play and went into work looking over to see what they could fix,” head coach Peter DeBoer said.

When questioned about his challenge, DeBoer admitted “I’m not sure what goalie interference is, but that’s not a reflection of the league, the refs or anyone else. There was just a lot of ambiguity there. For me, that looked like a classic case in my eyes and in our group’s eyes, but obviously we were wrong.”

Sharks
Matt Tennyson (concussion) is on a conditioning assignment with the San Jose Barracuda.

Up Next: Both teams will head to Staples Center for Game 5 on Friday night. Puck drop is scheduled for 7:30 pm PT on CSCA, PT25.