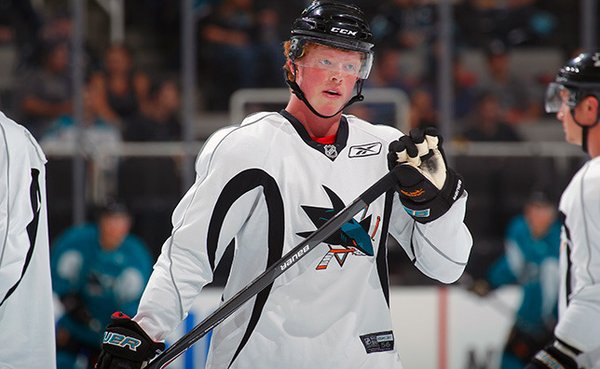 Keith Kinkaid and the New Jersey Devils bounced back from a horrendous game by spoiling the San Jose Sharks’ home ice advantage. He started his second straight game in place of Corey Schneider, who’s out with a sprained right knee.

The Sharks were coming off back-to-back road victories and played for the fourth time in six nights.

Simply put, New Jersey controlled Thursday’s game from beginning to end. After a scoreless first period, Devante Smith-Pelly scored the first goal of the game to give his team a 1-0 lead. Travis Zajac scored twice in the third period, almost recording a hat trick, but now has 12 goals so far this season.

After the loss, San Jose announced their signing of right winger Alex Schoenbaum to an entry-level contract. He was the Sharks’ 2014 third-round draft pick. The 20-year-old has 27 goals and 53 points in 61 games this season with the Portland Winterhawks of the Western Hockey League.

At 6’1 and 200 pounds, he’s large enough to play a physical style of hockey. According to the Sharks’ official website, San Jose general manager Doug Wilson said, “Alex plays the game with a physical edge that helps keep his opponents honest. His combination of size and skill makes him a difficult player to play against and Portland (coach) Jamie Kompon has helped him raise his all-around game. We look forward to him joining our organization.”

Looking into the near future, Saturday’s contest between the Sharks and the red-hot Washington Capitals should be exciting to watch.

Last Saturday, Washington hit the 100 point mark with a 2-1 win over the Boston Bruins in overtime. Matt Niskanen scored the game-winning goal at 2:36 of the extra period to help the Caps reach a hockey milestone.

The Caps squad is excellent, as they have the best record in the Eastern Conference right now. The Sharks will definitely be measuring themselves against a team on a historic run. Washington won 10 of their last 14 games and are seeking to become the third team in NHL history to win 60 games, joining the 1995-96 Detroit Red Wings (62) and the 1976-77 Montreal Canadiens (60).

“It’s a great test for us,” Sharks coach Pete DeBoer told the San Jose Mercury News. “I think our guys should be excited about seeing where we stack up against arguably the best team in the league.”

The Sharks beat the Capitals 5-0 on Oct. 13 in the third game of the season, but the Caps played without the league’s top scorer Alexander Ovechkin and all-star center Nicklas Backstrom.

The Sharks have been struggling lately, so the showdown may be a bit nerve wracking for the home team.