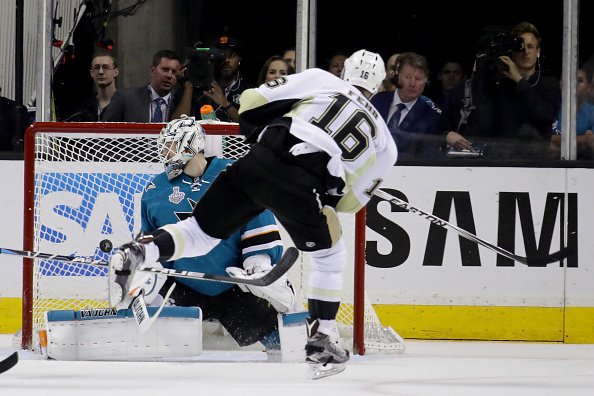 Eric Fehr scored a late goal to give the Penguins some breathing room in the third period.

The Sharks and Penguins have been playing incredible hockey, but some players such as Patrick Marleau, Brenden Dillon, Roman Polak, Kris Letang and Evgeni Malkin had to step up.

In a series that was supposed to be exciting, all three games have been decided by one goal and two of them required overtime.

Sharks forward Tomas Hertl didn’t play in Game 4 because of a lower-body injury.

The Shark Tank was decked in teal and the fans were ready for the inevitable puck drop. Metallica got the crowd rocking with their rendition of the National Anthem.

Ian Cole was due for his first goal of the playoffs and it happened tonight. Cole collected the rebound off Sharks goalie Martin Jones and fired it into the net to give the Penguins a 1-0 lead at 7:36 of the first period.

The Penguins went on their first power play of the game after Marc Edouard-Vlasic was called for interference against Sidney Crosby at 11:37.

Despite the Sharks outshooting their visitors, 8-6, the Penguins led 1-0 after the first.

Melker Karlsson went to the penalty box for interference against Eric Fehr at 2:28 of the second period. The Penguins went on their second power play of the game and took advantage of it. Pittsburgh took a 2-0 lead just nine seconds later. Phil Kessel fired a shot into the net that Evgeni Malkin deflected in for a power-play goal, his fifth of the playoffs.

The Sharks needed to shoot the puck instead of passing it. Sure, it was a straightforward strategy, but couldn’t be carried out.

“I’m frustrated,” winger Melker Karlsson said loudly and with irritation. “We keep playing from behind.”

Logan Couture fired a snap shot that almost entered the net for a potential goal that would’ve cut the deficit in half, but Penguins rookie goalie Matt Murray made a fantastic save to block it.

The Sharks needed a few nice shifts to bounce back into the game and force overtime.

There was some hope when Melker Karlsson collected the blocked shot and wristed it past Murray to cut the deficit in half at 8:07 of the third period.

“I thought we did a better job in the third period,” center Logan Couture said. “We kind of stretched it out.”

However, the hope began to vanish, as Eric Fehr put the Penguins ahead 3-1 with 2:02 left in the third. Fehr collected a pass from Carl Hagelin and wristed it past Jones for his third goal of the playoffs.

With the time winding down, the Penguins went on to take Game 4 with a 3-1 victory over the Sharks. Martin Jones made 17 saves for San Jose, while Matt Murray made 23 saves for Pittsburgh.

The Penguins lead the best-of-seven series 3-1.

The Sharks’ loss made the locker room quiet for the team along with the media.

“We gotta find a way to win,” captain Joe Pavelski said. “It could be over on Thursday if we don’t try.”

In his press conference, head coach Peter DeBoer made it clear that the series wasn’t over yet.

“There’s no quitting in our group,” DeBoer responded when asked about the team forcing a Game 6. “We’re the best road team in the league. We’re going to show up in Game 5.”

Game 5 will be held in Consol Energy Center Thursday at 8:00 pm ET on NBC, CBC and TVA.