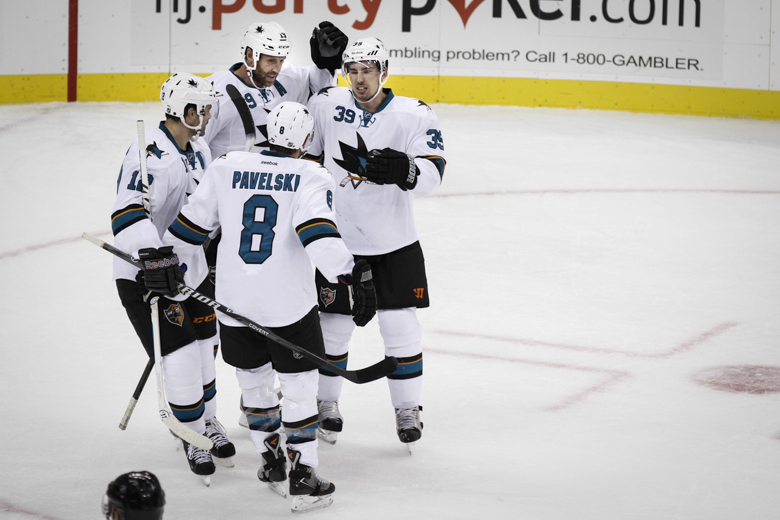 The San Jose Sharks celebrate a goal in the 1st Period of their game against the New Jersey Devils on October 18, 2014 at the Prudential Center in Newark, NJ.

Sharks: Five Keys to Success in the Second Half

After an impressive last season, there was somewhat of a let down in the first half of the San Jose Sharks’ 2016-17 season.

Here’s a look at the five keys to success to the Sharks’ success in the second half.

1. Stay healthy
Injuries are an inevitable part of the game, but a plethora of injuries cause negative effects.

Forward Tomas Hertl was out for 32 games with a right knee sprain. The Sharks went 22-8-2 without Hertl and were one point up on the Anaheim Ducks and two up on the Edmonton Oilers Thursday. Hertl’s presence provided some fresh legs to a Sharks team that was looking for their seventh straight win over an 11-day period.

Unfortunately, the Oilers snapped the Sharks’ six-game win streak Thursday. Hertl was given the OK gesture, but he wasn’t the same center he once was. Hertl told reporters Thursday that playing an NHL game for the first time in 10 weeks because he wasn’t all alone this time around. The Sharks will need to stay healthy to avoid a collapse in the second half.

2. Kill off penalties
The Sharks rank 14th on the team penalty kill percentage list. They’ve killed 82.2 percent, the equivalent of 129 penalties, thus far. The Sharks’ penalty kill was quite brilliant in the first half.

However, the Sharks have allowed 23 power-play goals against opponents. Head coach Peter DeBoer drastically shuffles his units sometimes, which often causes the players some confusion.

The Sharks should put Marleau back in the top unit. The 37-year-old forward has been putting on a show lately, scoring goals in the third period on Jan. 24 when the Sharks faced the Colorado Avalanche. Following the spectacular performance, Marleau scored the game-winning goal late in the third period as the Sharks closed out a brief, two-game road trip Wednesday at MTS Centre against the Winnipeg Jets. Marleau’s 498th goal put the Sharks back in first place.

4. Shoot the puck
The Sharks’ forward lines must join the rush, shoot the puck and contribute offensively. Their fourth line has been lethal especially when the coaching staff plays Melker Karlsson with Ryan Carpenter and Timo Meier.

The Sharks traded Tommy Wingels to the Ottawa Senators for Buddy Robinson and Zack Stortini along with a 2017 seventh round draft selection Tuesday. Wingels would be a steal for the Senators, whose fourth line has been struggling lately.

Karlsson is a secondary scorer, penalty killer and solid faceoff guy. His disciplined play allows him to hold down the fourth line. He has six goals and seven assists in 43 games thus far. His hustle and reliability can help the Sharks apply pressure on their opponents. It’s just the declining scorers such as Ward and Mikkel Boedker who have to use speed to complete crucial passes.

5. Switch up goaltenders
Martin Jones is a consistent goaltender who covers the net with his size and athleticism. Jones, however, is not Martin Brodeur. He currently holds a 25-15-2 record in 42 starts thus far and is on pace to start 72 games, which isn’t a good idea in the long run.

Aaron Dell is 6-2 in eight starts thus far. DeBoer should be giving Jones more of a rest, so Dell can start more games. The Sharks have had bad experiences from overworking goaltenders in the past, so they shouldn’t repeat past mistakes.

Burns also contributed with 21 goals and 30 assists in 50 games thus far. The offensive defenseman is more than worthy for the Norris Trophy.

The Sharks cannot take their foot off the gas pedal if they want to succeed in the second half.