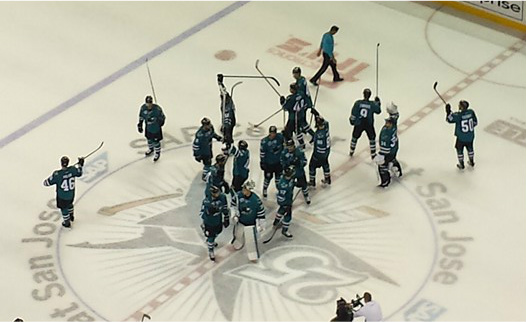 The Sharks were coming off a 5-4 loss to the Winnipeg Jets on Thursday at SAP Center that fastened them into a third-place finish in the Pacific Division. San Jose will open its Western Conference First Round series on the road against the Los Angeles Kings or Anaheim Ducks.

The Coyotes have lost three straight and five of its past six games entering their season finale. Arizona had a 2-0 second-period lead before losing 3-2 in overtime to the Nashville Predators on Thursday at Bridgestone Arena.

The Sharks’ season awards were handed out before Saturday’s game. In a vote by local media, Joe Thornton was named the Sharks’ Player of the Year and Joonas Donskoi was selected as the Rookie of the Year. It was the third time Thornton has been chosen as the team’s player of the year, as he finished with a team-high 82 points. Thornton was also chosen for the award in back-to-back years (2006 and 2007).

The goaltending matchup was respectable because Martin Jones was in net for San Jose while Mike Smith was in net for Arizona.
The game was fairly physical. First, Connor Murphy served a minor penalty for holding at 5:14. Then, things escalated quickly, as Roman Polak and Shane Doan dropped their gloves at 8:17 of the first period. Doan received a four-minute penalty for unsportsmanlike conduct towards Polak. Doan also received penalties for fighting, instigating and misconduct. In addition, Oliver Ekman-Larsson received two minutes in the penalty box for hooking Nick Spaling.

Both teams went on two power plays but were unable to take advantage of them. The Sharks outshot the Coyotes 13-10, but the game was scoreless after 20 minutes.

The Sharks missed a lot of opportunities in the second period. Their offense was rather uninspiring. Coyotes goalie Mike Smith blocked 10 shots made by San Jose. A combination of blocked shots and missed shots from both teams prevented potential goals from being scored.

The Sharks outshot the Coyotes 23-17, but the game remained in a scoreless deadlock after 40 minutes.

Two Coyotes penalties took place 6:33 into the third period. Boyd Gordon was called for high sticking Joe Thornton. Oliver Ekman-Larsson was called for unsportsmanlike conduct. San Jose went on their third power play of the night. Joe Pavelski scored 55 seconds into a 5-on-3 Sharks’ power play with a wrist shot that beat Mike Smith. The Sharks finally opened the scoring and took a 1-0 lead at 7:29. Joe Thornton and Brent Burns provided the assists on Pavelski’s 38th goal of the season.

Then, San Jose committed two penalties. Logan Couture got a two-minute penalty at 13:34 for high sticking Oliver Ekman-Larsson.  Tommy Wingels delayed the game for putting a puck over the glass with just 2:14 left in regulation. Arizona received two power plays late in the third, but the Sharks managed to kill off both penalties, thanks to their maturing defense.

The Sharks concluded the 2015-16 NHL regular season with a 1-0 shutout win over the Coyotes. Martin Jones made 20 saves for San Jose. Mike Smith made 31 saves for Arizona. Tonight wasn’t the prettiest win, but in the Pacific Division, San Jose (46-30-6) finished third while Arizona (35-39-8) finished fourth.

“There’s a lot of work to get done here. A lot of guys are trying to adjust, but we got to get back on it and change some things about the way we play,” captain Joe Pavelski said. “We just have to get everybody on board.”

“It’s a fun time. It’s just a time of the year where we just do the best we can,” forward Joel Ward said. “The crowds are fired up during the games. I’m just excited to be back and playing again. . .We have a chance to win the big prize.”

“That was a challenge,” center Logan Couture said. “It’s a hockey game, so you’re not always going to get a perfect result.”

“I think more important than the result, we just wanted to play well heading into the playoffs,” goalie Martin Jones said. “Did some good things, got a big power play goal and played solid defensively.”

“We got a win, which was good. We took the game defensively and got a power play goal. There were some things the team didn’t change,” head coach Peter DeBoer said. “We wanted to keep our structure. We didn’t want to turn that off under any circumstances. It wasn’t the prettiest win of the year, but we kept it together and found a way.”

When asked about preparing the team for the playoffs, DeBoer asserted “We’re going to wait until tomorrow night to see who we play. Unfortunately, the Washington Capitals host the Anaheim Ducks. I’ll be working all day, but we’ll have to see what happens tomorrow. The guys have the day off. Then they’ll go to work Monday morning. . .There’s no way around [the Kings or Ducks].”

Both Marc-Edouard Vlasic (knee) and Matt Nieto (hand) will miss their 12th consecutive games against the Coyotes on Saturday. Both players are expected to return for the playoffs next week. Dainius Zubrus will return to the lineup and Micheal Haley will be scratched.

Paul Martin missed Saturday’s game as a “maintenance game off.” Mirco Mueller stepped into the lineup to replace Martin.

Anders Lindback, Michael Stone, Joe Vitale, and Martin Hanzal are all shut down due to injuries. Jarred Tinordi and Louis Domingue will not play either. Nicklas Grossmann is likely to rejoin the team after being away to witness the birth of his child.

The Sharks have to wait until Sunday night to find out whom they’ll face in the first round of the Stanley Cup playoffs as the Anaheim Ducks have a chance to clinch the Pacific Division with a road win over the Washington Capitals.