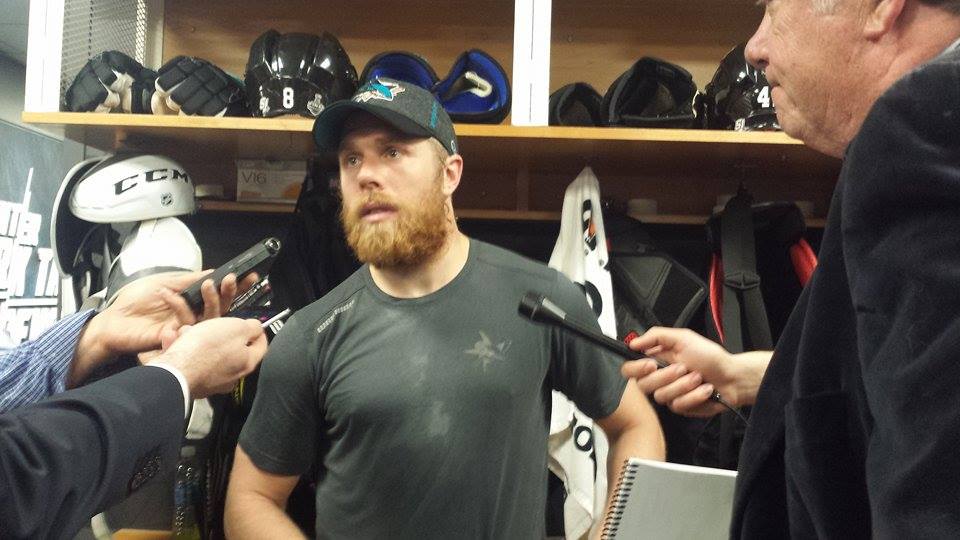 The San Jose Sharks evened the best-of-seven series with a 7-0 shutout victory over the Edmonton Oilers in Game 4 at SAP Center Tuesday.

Although it wasn’t a must-win game, the Sharks needed to turn the momentum in the series around after back-to-back shutout losses that put them in a 2-1 hole. They scored just 15 seconds into the opening period for a new franchise record as Joe Pavelski batted a deflected pass from Justin Braun and fired it into the net, beating Cam Talbot for his first playoff goal of the year.

“It was nice to grab that first one (goal),” Sharks center Joe Thornton commented on Pavelski’s goal. “It wasn’t a must-have, but it was nice.”

The Sharks controlled the tempo for most of the period. Brent Burns unleashed a slap shot into the Oilers’ net at 11:50 but it was saved by Talbot. They generated a lot of quality shots and scoring chances.

Kris Russell went to the box for hooking Timo Meier midway through the period. Logan Couture then scored his first goal of the playoffs. Couture beat Talbot with a top-shelf snap shot with 8:58 left in the period.

Zack Kassian was called for delay of game with 4.7 seconds left in the period. The time on the clock winded down and the Sharks held onto a 2-0 lead over the Oilers. Shots were 14-12 in favor of San Jose.

Kassian served the remainder of his penalty in the opening minutes of the second period. In the midst of Kassian’s penalty, Connor McDavid was called for interference against Pavelski.

The Sharks took advantage of the power play as Patrick Marleau fired a long-range snap shot through traffic for his first goal of the playoffs just 2:02 into the period.

The Sharks continued to control the tempo when Marcus Sorensen put the rebound into the net for his first goal of the playoffs, extending the Sharks’ lead to 4-0 at 10:14.

The Sharks took a 5-0 lead with 7:08 left. Jannik Hansen sent a pass to Couture, who fired it into the net for his second goal of the night.

After allowing his fifth goal of the night, Talbot left the game and was replaced by Laurent Brossoit. However, that substitution didn’t stop the Sharks.

Leon Draisaitl received a five-minute major for spearing Chris Tierney’s crotch. He also had a game misconduct. Pavelski scored his second goal of the night by tipping in a pass from Burns to expand the Sharks’ lead to 6-0 with 3:14 left. Draisaitl was later ejected from the game.

“We’re not a team that likes to get into anything messy,” Tierney said. “So I hope he’ll get disciplined accordingly.”

“It was great,” Pavelski said when asked about both of his goals. “When you come into the rink, you want to feel the energy from your teammates and the energy from the crowd.”

The Sharks outshot the Oilers 29-17 and carried a 6-0 lead to the locker room after 40 minutes.

The Sharks scored their seventh goal of the night in the third period. Darnell Nurse was called for high-sticking 5:48 into the period. David Schlemko picked up a pass from Tomas Hertl and put the puck into the net for his first goal of the playoffs just 57 seconds later.

The Sharks never took their foot off the gas en route to a dominant 7-0 win over the Oilers, tying the series. Martin Jones stopped all 23 shots he faced.

“We gotta win on the road,” Sharks veteran forward Joel Ward said. “I’m not too confident about this series just yet.”

Talbot made 16 saves before exiting the game late in the second period. Brossoit made six saves in relief of Talbot.

“That first period was probably similar to last game’s first period except that we got on the board first,” Sharks head coach Peter DeBoer said.

DeBoer added: “It was nice to score and win by the margin we did, but we would still only get one win for it. We don’t get anything extra. It’s still 2-2 and now we have to follow that up and play well in the next game.”

Up Next
The Sharks head to Rogers Arena to face the Oilers in Game 5 Thursday at 8:30 p.m. MST on NBCSN, SN, TVAS and NBCS CA.