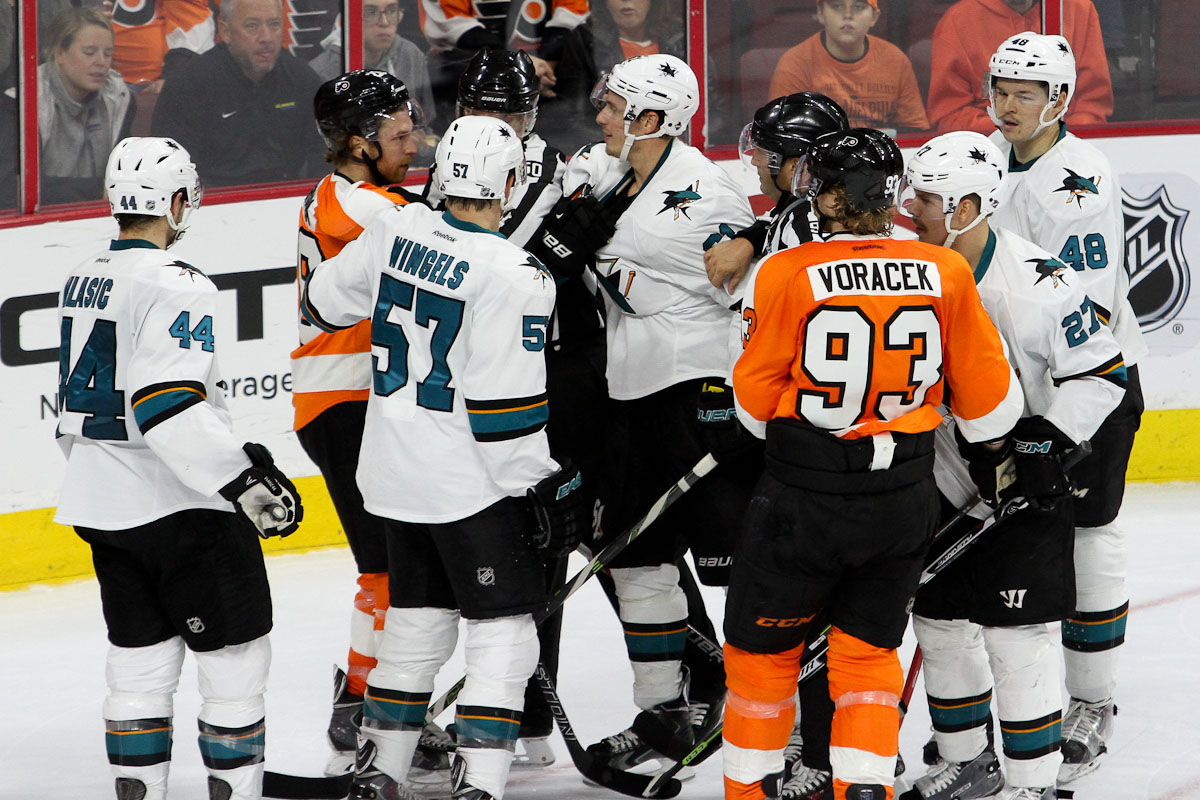 The San Jose Sharks have lost three straight games at home, but had a chance to clinch a playoff berth with a win over the rival Los Angeles Kings on Monday night.

Turns out, fourth time’s the charm. The Sharks officially clinched a playoff berth before they defeated the Kings 5-2 when the Calgary Flames beat the Arizona Coyotes 5-2.

Let’s rewind a minute to the fact San Jose missed the playoffs last season, but has made the postseason in 11 of the past 12 seasons. The Sharks beat the Kings for the first time at SAP Center in three tries, winning the season series 3-2-0.

The Kings opened the scoring at 9:12 of the first period, as Vincent Lecavalier scored his ninth goal of the season to give his team a 1-0 lead, firing a wrist shot from the circle to the top corner of the net. The wrister deflected a little bit off of Brent Burns, but managed to get past Martin Jones. Through Lecavalier’s goal, Alec Martinez picked up his 21th assist while Brayden McNabb picked up his 10th assist.

Justin Braun was in the penalty box for delaying the game with a puck over glass, but deposited a wrist shot into the net from Melker Karlsson, tying the contest 1-1 at 12:57 with his third goal of the season. Also, Tommy Wingels picked up his 10th assist.

The Sharks took a 2-1 lead at 7:55 in the second period, thanks to Joe Pavelski’s 36th goal of the season. Two assists were provided by Tomas Hertl and Brent Burns.

Then, Lecavalier netted his second goal of the game and 10th goal of the season by using a five-hole shot. The Kings tied the contest 2-2 late in the second period.

The Sharks were tied at 2 after 40 minutes of play, but a huge third period allowed the home team to clinch a playoff berth and snap its three-game losing skid.

Joe Thornton cleared up the rebound on the power play and fired it into the net to put the Sharks ahead 3-2. Joe Pavelski and Brent Burns tallied the assists on Thornton’s 18th goal of the season.

Tommy Wingels sent a feed in front of Melker Karlsson who beat Kings goalie Jonathan Quick to expand the Sharks’ lead to 4-2 at 16:41 of the third. Roman Polak accounted his 15 assist in the process.

Braun scored his fourth goal of the season by wristing a spectacular bank shot into the empty net from the Sharks’ zone, sealing the win with his second goal of the game.

The Sharks were back in the playoffs with a 5-2 win over the Kings. Jones made 30 saves against his former team. Quick made 26 saves for Los Angeles.

Sharks forward Joonas Donskoi did not play Saturday after he collided with teammate Logan Couture in a 6-3 loss to the Edmonton Oilers on Thursday. He was replaced in the lineup by Dainius Zubrus, who was a healthy scratch on Thursday.

Kings forward Kris Versteeg, who has missed the past four games with a foot injury, didn’t travel to San Jose, LA Kings Insider reported. Versteeg was among a handful of players to participate in an optional practice Sunday.

Up Next: Sharks visit the Vancouver Canucks at 7 pm PT on CSCA, RSNP.