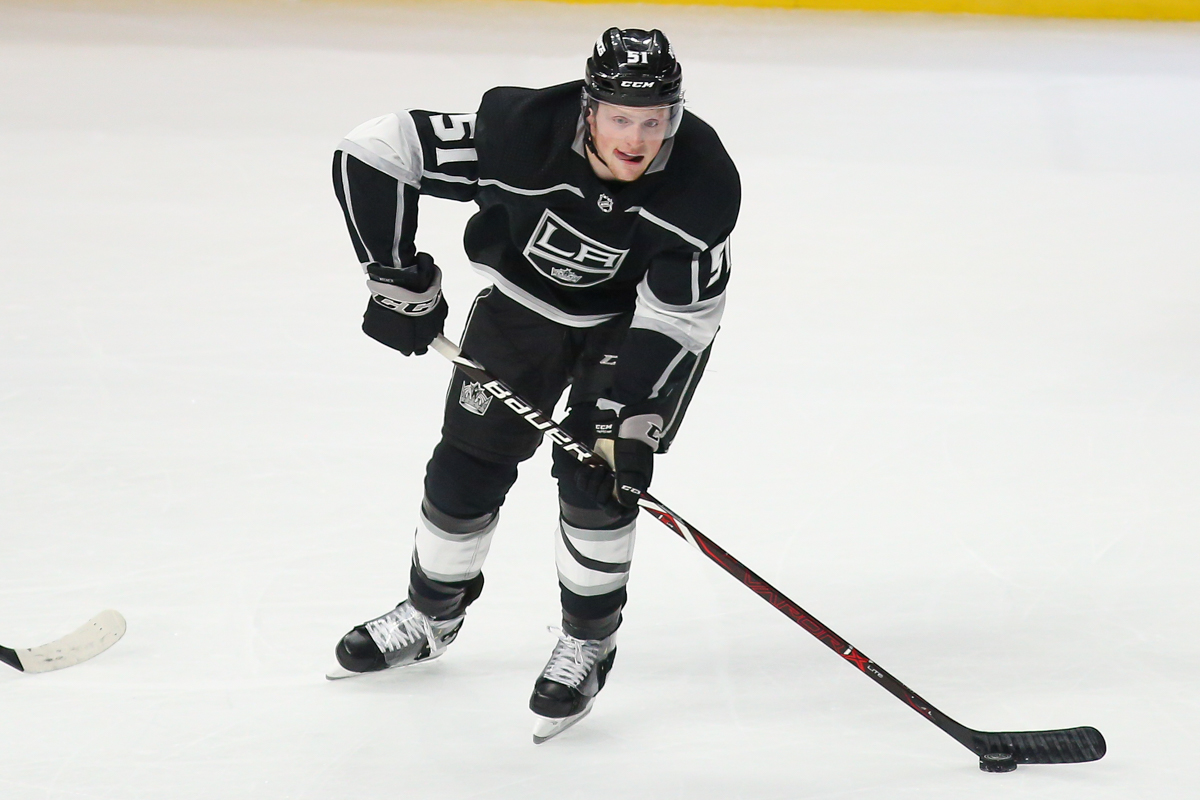 Shake Up the Happiness

A shakeup never hurts, right? (Unless it’s the Northridge Quake. Oh, that was bad. But I’m talking about hockey here in LA. The Kings, in particular.) With Vancouver coming in off a 1-0 loss to the Ducks a night ago, the Kings, who last lost to Washington but played well on a recent six-game road trip, saw some changes in their lines.

And their lineup. Dionne Phaneuf—scratched. That last happened a few games ago, against Philly. That was the first time ever in his career. Jeff Carter—scratched. That was explained by one person in the know as simply making room for a younger lineup. Carter has been slower than previously ever since his severe leg laceration a year and a half ago.

This left a few odd lines. The first was Kopitar with Iafallo and Toffoli, the latter of whom was an addition. The second was Michael Amadio surrounded by Brown (down from the first line) and Brendan Leipsic.

Third up was Kempe with Hagelin and Kovalchuk. That trio has been seen of late, and they should produce uncommon speed. In fact, they seem to stop up before they make plays, allowing the opposition to catch up more often than not.

And finally, you had Kyle Clifford (eventual third star) with Trevor Lewis and Austin Wagner. This is not odd, as Lewis is back after a two-month absence and has resumed the spot on this line which he has had for ages and which had been filled by Nate Thompson. Thompson, you likely know, was dealt to Montreal precisely because he wouldn’t be needed any longer with Lewis having returned.

But it got more inventive. Soon after the start of the game, the centers of the second line (Amadio) and fourth line (Lewis) were switched up. The result was not what you’d predict: production from the second line. Rather, the fourth line lit up.

The Canucks got the first goal, on the power play. Eight seconds later, Clifford passed a puck to Wagner, who blasted a wrist shot up and over Jacob Markstrom. It was about the same shot that had just beat Quick off the stick of Pettersson for the Canucks.

The second period was midway done when Brock Boeser scored after an awful Sean Walker giveaway that put Adam Gaudette in possession of the puck. He passed it to a wide-open Boeser, who roofed it.

But then that fourth line of the Kings snapped into action again. They had the best shift of the game, holding the puck in the Vancouver end for an extended time and finally dishing it back to the point to Alec Martinez. He took the predictable slapshot from the blueline. A rebound came out to Clifford, in close in the slot.

He took a turnaround backhand, which was saved. The rebound went to the left, to Amadio, who buried it on the put-back. They certainly deserved it for the effort. The game stayed that way, 2-2, through the end of the second period. The Kings were on a power play as the frame ended, Gudbranson for interference. They did not capitalize as the third period got underway.

The other notable event in period two, by the way, was Kings speedster Austin Wagner sitting on the bench doubled over, his shoulder the culprit. He had gone to the bench hunched over. He would leave, but he was back with about a minute left in the second. His time on ice for the game, though, was reported at under eight minutes (7:41).

The third period saw the Kings gain the lead when Alec Martinez, listing to his right, flung a puck on a wrister that beat Markstrom. For some reason, maybe a tip, the puck went in past him on his right, so kind of cross-body from where it had been shot. From my angle, it didn’t look like a dangerous shot. Markstrom’s body language suggested that he was fooled on it. His fault or the defense? If it was his, it’s a bad goal.

And things were going just that well for the Kings until about a minute and a half from the end, when Gaudette of Vancouver tied the game. A long pass got caught up in Drew Doughty’s equipment, dropped, and was whipped into the net by Gaudette, who earlier had an assist to make it a two-point night.

The shootout decided it, with Boeser scoring the deciding goal to give Vancouver two points that were invisible to them until almost too late. The shootout started with the teams trading tallies. Then neither scored in round two. Kempe took a wrist shot that was saved in round three, leaving Boeser to win it, which he did.

Had Vancouver lost, it would be four points sacrificed to the two teams at the bottom on their Division in two nights. Winning keeps them just out of the wildcard spot with 59 points, though they’ve played two more games than the teams surrounding them (Dallas, Minnesota, Colorado) so it may be hard to get a proper read on the situation.

But a win’s a win, even if by the skin of the teeth.

Ever the master of understatement, Travis Green of Vancouver summed up: ““I’m happy for our group. They found a way to win a hockey game. It was a tough game tonight, playing back-to-back against a team that had been sitting here for a bit, and nice to find a win.”

Putting a hopeful spin on what was a good night for him with the goal, Austin Wagner said, “We believe in each other in this room. That’s what we’re trying to do; get leads and play with the lead. We didn’t get it tonight, so we got a game here on Saturday and we’ll be ready to go.”

The Kings now face Boston on Saturday night and Washington in a rare Monday evening contest. Each team will have been to see the Ducks the night before, perhaps suggesting an advantage for the LA team.