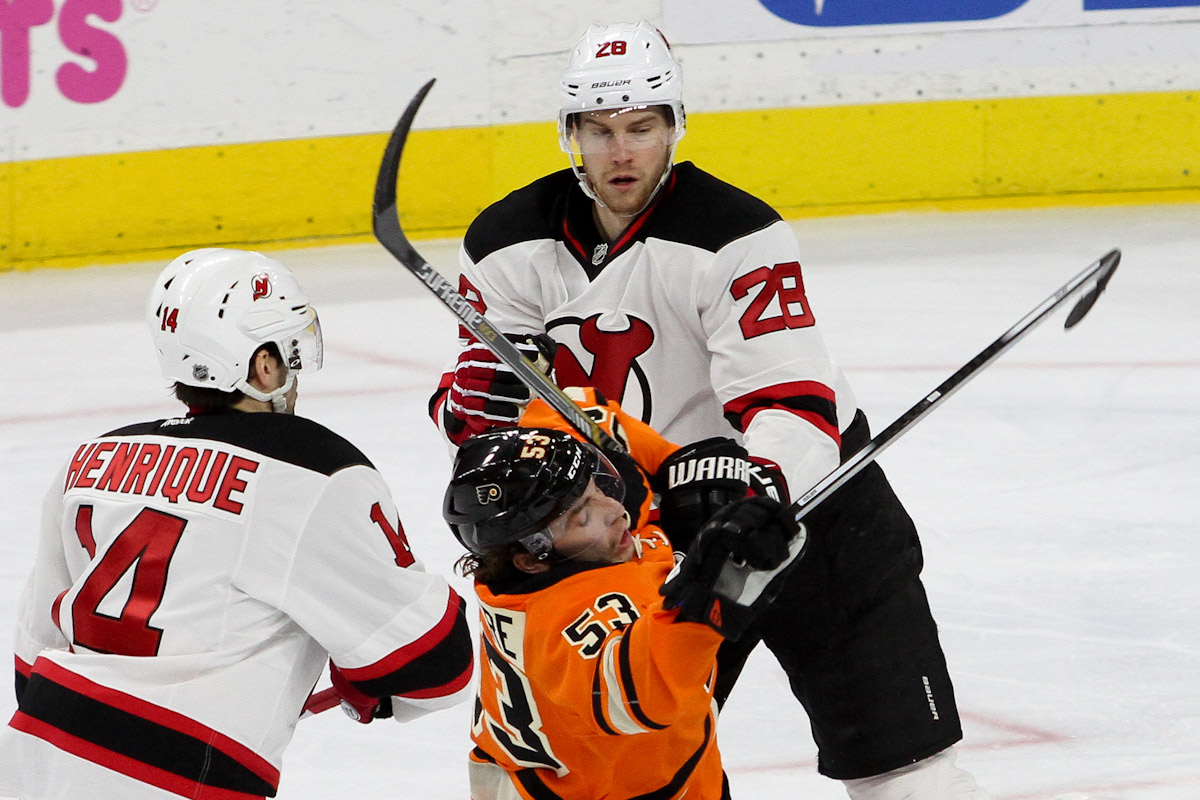 Severson Earning His Role with the Devils

After another season of being stifled offensively, the Devils knew they had to add skill into their lineup. That led to the offseason blockbuster deal that sent Taylor Hall from Edmonton to New Jersey for promising blueliner, Adam Larsson. Larsson, the fourth overall pick at the 2011 NHL Draft, was becoming a mobile and reliable top defenseman in the league and a coveted asset for to an Oiler team with pressing needs of their own. So far, the swap has appeared to satisfy both clubs, but it’s also offered an opportunity for one Devil in particular.

A year ago Damon Severson was struggling. He made the leap from juniors to the NHL and showed spurts of his offensive abilities he became known for while playing for Kelowna in the Western Hockey League. In his rookie campaign, he scored 17 points in 51 games. Heading into his second season with the Devils, he figured to be an important part of the back end. Instead, it was a season plagued by bouts of inconsistency. He finished the 2015-16 season with just 10 points in his final 44 games. As his game declined, so did his ice time, even finding himself a healthy scratch on some nights.

If there was a gamble in surrendering Larsson, a 23-year-old defenseman with good upside and a long-term, cap friendly contract, it was aided by the hope that Severson could rebound from the so-called ‘sophomore slump.’ Now 11 games into his third season with the Devils, he leads the team with nine points and is averaging just over 20 minutes a game on the year. It’s a small sample size, but it’s exactly the response he and the team had hoped for.

“When you look at him this year, he’s in a situation where he’s really played hard on the puck,” John Hynes, the second-year coach said of Severson. “I think the difference between last year and this year is when he’s under pressure in certain situations he’s making good decisions and you can see his offensive skill come out.”

Showing his creativity was not always a luxury afforded to him. In the years prior his struggles without the puck hurt his ability to utilize his talents and cost him some of the coach’s trust. That’s starting to change.

“The big thing is, we didn’t give it to him. Last year, he was looking for it and he didn’t deserve it. This year he as a player has earned the opportunity to play in the situation’s he’s in,” Hynes said.

One player this has helped is Andy Greene, the team’s captain paired with Severson. After playing the better part of the last four seasons paired with Larsson, the two complimented each other’s games well as both played a similar brand. Smart, positional hockey, where sticks were mostly used to clear pucks. His new partner meanwhile, boasts not only the right-handed shot, like Larsson but an offensive dimension the league’s worst scoring team desperately needed.

Even for a Devils prospect pool, which is filled with young defenseman throughout their system, quality puck-movers from the back end are a commodity. Add in the right-handed shot and Severson’s importance is heightened, as has his role and minutes.

“He plays big minutes against good players,” Cory Schneider said. “It’s crucial for us that we have him in this role.”

Perhaps the biggest asset though to the 22-year old’s evolving game is a growing maturity. Now charged with the added responsibility, he’s taking the game as it comes, bringing a required workhorse mentality each shift.

“I’m just trying to help the team whatever way I can,” Severson said. “Just trying to make hockey plays and reads that are there.”

With just a small fraction of the season complete, he’ll be one of a number of Devils looking to provide timely offense and find a balance of consistency after last year’s woes in both areas helped cost them a spot in the postseason for the fourth-straight season.