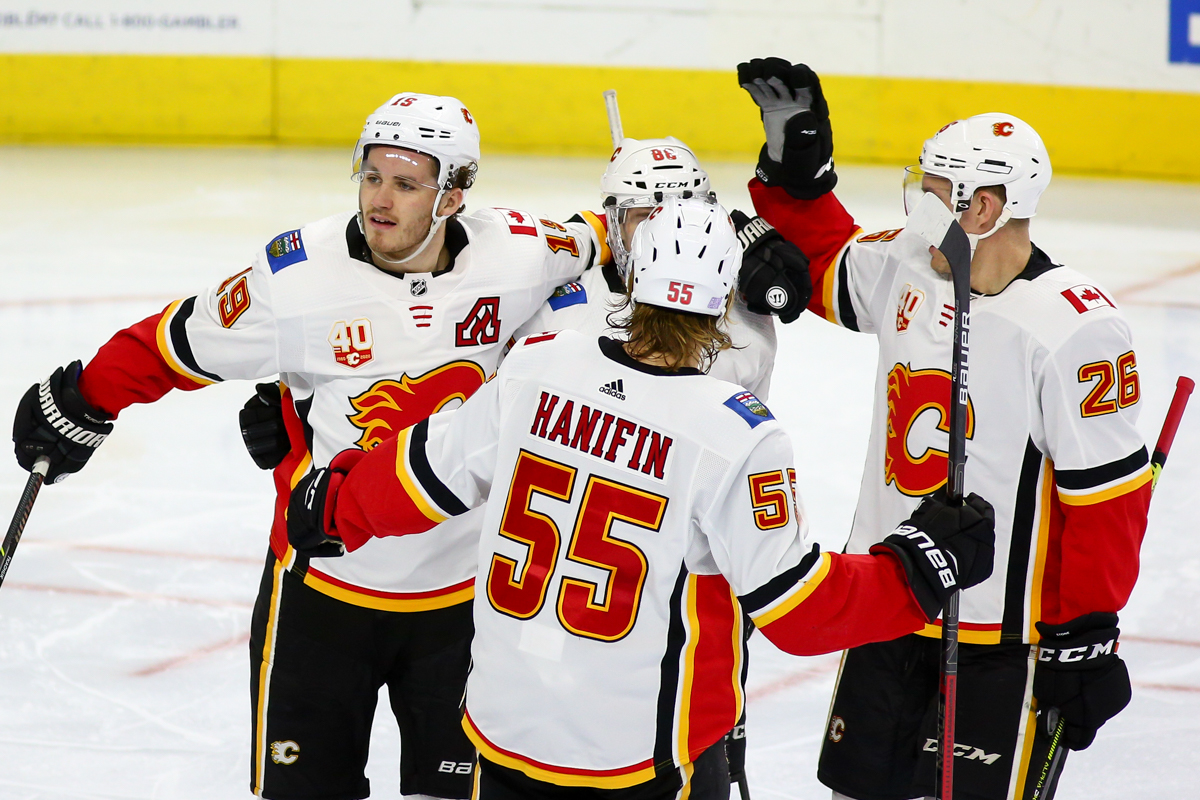 Matthew Tkachuk #19 of the Calgary Flames celebrates with his teammates

Seven Straight for the Flames and New Coach Geoff Ward

Hosting the Toronto Maple Leafs Thursday night, the Calgary Flames continued their win streak to seven games. At a crucial time of the season, the Flames are proving night in and night out that they want to contend this year. Games like Thursday night’s point teams in the right direction for the second half of the season and coach Geoff Ward was impressed with the teams approach to the game.

“Our team’s been pretty resilient and tonight was no different. I thought they stayed on task and I thought they played to the process. We didn’t change what we were trying to do and eventually we got rewarded for it”.

That reward came early into the third, scoring three goals in the opening 3 minutes to put themselves ahead 4-2. Shortly after taking the lead, Travis Hamonic flipped a puck over the glass 20 seconds into an Elias Lindholm tripping penalty, leaving the door open for the Leafs to mount a comeback on a long 5-on-3 powerplay. The resulting minute and a half penalty kill proved to be the difference maker, as the Leafs threw everything at the Flames but failed to put one past a brilliant David Rittich.

After the game, John Tavares recognized the importance of finding a way to score at that critical junction in the game.

“When you get that type of opportunity we have to find a way to capitalize. We had some chances to get back in it, we just didn’t execute”.

Mitch Marner spoke to the level of composure the Leafs need to play with when the wheels start to fall off as they did at the beginning of the third.

“We have to be more assertive and play with calmness”.

The Flames are playing a similar brand of hockey to what they did last season. Contributions throughout the lineup are key to the Flames success and the last seven games have been a welcome return to last season’s form. A lot of credit is due to Geoff Ward, who has found a way to motivate the Flames through an important stretch of the season.

Evidence of the Flames strong play has been the resurgence of the bottom two lines. Michael Frolik was effective in his nine minutes of icetime with Mark Jankowski and Tobias Rieder. Frolik also tallied the game winner two minutes after Gaudreau scored to tie it. Ward praised the third line’s chemistry over the past few games and commented, “Their game’s been building. They’re a real important piece for us because of what they offer both on the offensive side of things and what they can do defensively as well”.

A big concern for the Flames this season has been their inability to score first in games and Thursday night was no different as Tavares opened the scoring halfway through the first. Allowing the first goal dropped the Flames to a league worst 22 games getting scored on first. Of those 22 games, the Flames have now managed to comeback and win 10 of them. It is an encouraging and disappointing statistic, and not a sustainable one.

Geoff Ward is turning a difficult transition into a season-defining win streak, and looks to carry that into Saturday’s matchup against the Carolina Hurricanes. Under his new system and line shakeups the Flames are playing rejuvenated hockey from the first line to the fourth, which some nights is hard to tell apart. Every Flame’s player is playing with new life under a new coach and are eager to prove their worth somewhere in the lineup.

We’ll see how long they can sustain this type of play as they approach the halfway mark of the season, a pivotal time of year for all NHL teams.