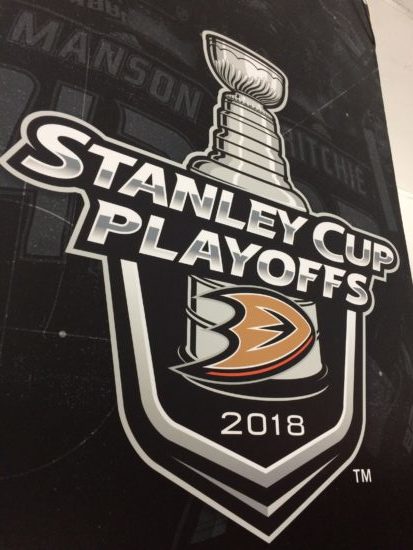 There wasn’t much to be said in advance of the Ducks-Sharks game on Saturday night except one thing: the Ducks better be better, or there might not be a game five late next week. This could be the end of hockey in Anaheim for the year.

They had been terrible two nights before, and Ryan Getzlaf’s statement “It’s one game of a seven-game series” notwithstanding, the team had no choice but to win. On Thursday, they had failed in every area, but most of all, discipline. They had taken seven minors, one at the end of the game, and allowed a power play goal and lots, more than lots, of chances. That had to change. Fast.

They got right to it, scoring their first goal versus the Sharks at forty seconds. Ah, the Ducks were back. For a while. They would exit the first period down 2-1, partly due to the exact problem that plagued them the other night. The Ducks took two penalties in the first, the second of which yielded a power play goal for the Sharks.

The hitting in the period was fierce. It reminded of the question asked of DeBoer the other night, which might be summarized essentially as, “What if the Ducks ramp up the game in the hits department?” And his answer was two-fold. On the one hand, he said, “We can respond.” On the other, his response was, “I thought they were hitting quite a bit tonight.”

Well, that was nothing. The Ducks literally ran over San Jose for much of the first period. Beauchemin was the fiercest, and looked plenty guilty after going right over the back of a Sharks’ player in front of the visitors’ bench.

Peter DeBoer later would say, “We knew they were going to play their best game tonight, especially early. We were prepared for that. I loved our resolve. They took some liberties in the first period, they got away with, and we didn’t shrink. We stood in there. That’s one thing about our group. We don’t get pushed out of games. I loved our resolve. I loved our push back. We didn’t ask the referees to take care of it. We stood in there and came out of that first period up 2-1. That was critical in this game”

Early in the second, it felt like the Ducks were giving up. The Sharks scored at 1:11, even strength. The feeling in the arena, aside from joy from the many San Jose supporters who were in the nether regions up where the press box is, was defeat. It wasn’t quite as bad as last year, when they came out entirely flat and blew their last game with the chance to win their series against Nashville. But it was “here we go again.”

Then they got going. This was sparked by Carlyle changing his lines around. Perry played with Henrique and Ritchie. Getzlaf had Rakell and Kase. The Ducks got a power play, and scored a goal on it (Lindholm), and then started to surge.

Carlyle was happy with the team’s game. “It’s always very disappointing when you don’t win. But this was a much more even played game tonight than it was the other night. We still could be a lot cleaner in the neutral ice. . . . It seems that it takes us more tries to get through the neutral ice than is necessary.”

Period three began with a trading of chances side to side. Getzlaf, still playing with Rakell and Kase, had the Anaheim team down in front of the San Jose net. The puck came to Kase, and he made a stupid, sloppy backhand pass that was too weak to get to his point man. The Sharks rushed it, and ended up with Tierney getting a loose puck at the right of Gibson with the side open. He shot, backhanded. Gibson got a glove over to save the game. Or save it as much as you can when you’re losing. But there was lots of time left. This happened before the fifteen minute-mark had crossed over.

By the way, who was right in the crease area to clear the puck after the save? Getzlaf. He wasn’t available after the game. I saw him sitting on the doctor’s table in the room adjacent to the X-ray room. No rumours, just fact. The point is, we couldn’t ask him for his reaction.

Martin Jones had looked shaky in the San Jose net early. The first goal was tipped up off a stick but stoppable. Later in the first, he bobbled a puck in his pads off Kesler’s stick, letting it rebound awkwardly off his legs and down. In the third, he was solid. The Ducks had a power play when the puck was shot out for delay of game. Kesler got the puck in front, but he was hauled down. He still got off a shot. Jones stopped it. Then the puck worked its way out to the point again, and the Ducks boomed a slapshot to the net through traffic. Jones saw it somehow, and it thumped off his leg pads loudly enough to be heard in the opposite corner of the arena, where I sat.

The Ducks didn’t help themselves when Nick Ritchie took a tripping penalty at 9:17, with the shots having just drawn even on the night at 27-27. The Sharks had been ahead all night before this.

The PK held on, with nothing going in. Late in the two minutes, Pavelski just missed a rebound chance. The period went along. The Ducks surged. Then Corey Perry got stupid. For no reason, he came behind a Sharks’ player who had the puck in his feet and hammered him down from behind. It was an obvious interference penalty, with nothing gained whatsoever. He sat for two minutes starting at 16:17.

Let’s put that in hockey sense terms: Your team is down 1-0 in games at home. They’re further down 3-2 in the present game, at home. They haven’t beaten the other team but once in the year. They haven’t been that good in the game, except for their goalie, who has held them in. But they often score a late goal and pull games out.

So you come up from behind a defenseless player and smash him into the ice with the referee looking straight at you.

His coach’s later reaction? “It would have been better served to be less violent.” Duh. He later elaborated, but didn’t say much more. Just description, careful not to say anything judge-y. But he should have.

Peter DeBoer of the Sharks was frank about it: “If he wants to take a penalty at that point in the game, we’ll take the power play.”

Right. And if you were his coach? Well, nobody asked that. Anyway, you already know what happened. The Ducks poured it on in the last minute and a half with Gibson out of the net, passing the puck all over the zone. The Sharks resisted the chance to fire long at the empty net, instead clearing it, or trying to. Mostly, the Ducks held it in. But they couldn’t get it past Jones. The Sharks would end up with the shots advantage in the game, 35-30, but the Ducks made it exciting down the stretch.

Carlyle said of his team’s game, “I know the resolve in our room is one that, I guarantee you, we’re not going to lay down. . . . We made some mistakes and basically gave them some goals.”

Cogliano had earlier been quite morose in his comments. He said all the right things, but it wasn’t convincing. “They won two games here, and it’s going to be tough. We all know that. That’s the situation we’re in, but we have a good team. . . . We just have to fight, and find a way to win.”

What can they do? Slow the Sharks down. They tried that, and it hasn’t worked. Shoot more. That’s not the problem. Muck it up. No, they’ve done that well already. Get through the neutral zone. Both coaches talked about this. Maybe, if the Ducks can find a way to do that, they can get some goals. But they’re not a high-scoring team, despite their high-flying ways.

Anyway, Cogliano said it: “They play good team defense, and that’s tough to score against.” Unless they can get to Jones, but if they couldn’t capitalize on his first-period stumbles this game, what’s to say they’ll get to him at home on Tuesday?

Leaving the arena, people were saying “See you,” then pausing “if . . . .” The rest did not need to be said. Games three and four are in San Jose. Game five, if necessary, will be Friday in Anaheim.

Officially, the hits were 24-20 for the Ducks. I’ll bet the Sharks used more icebags after the game than that indicates. Faceoffs were almost dead even. Shot attempts were 68-61 for San Jose.