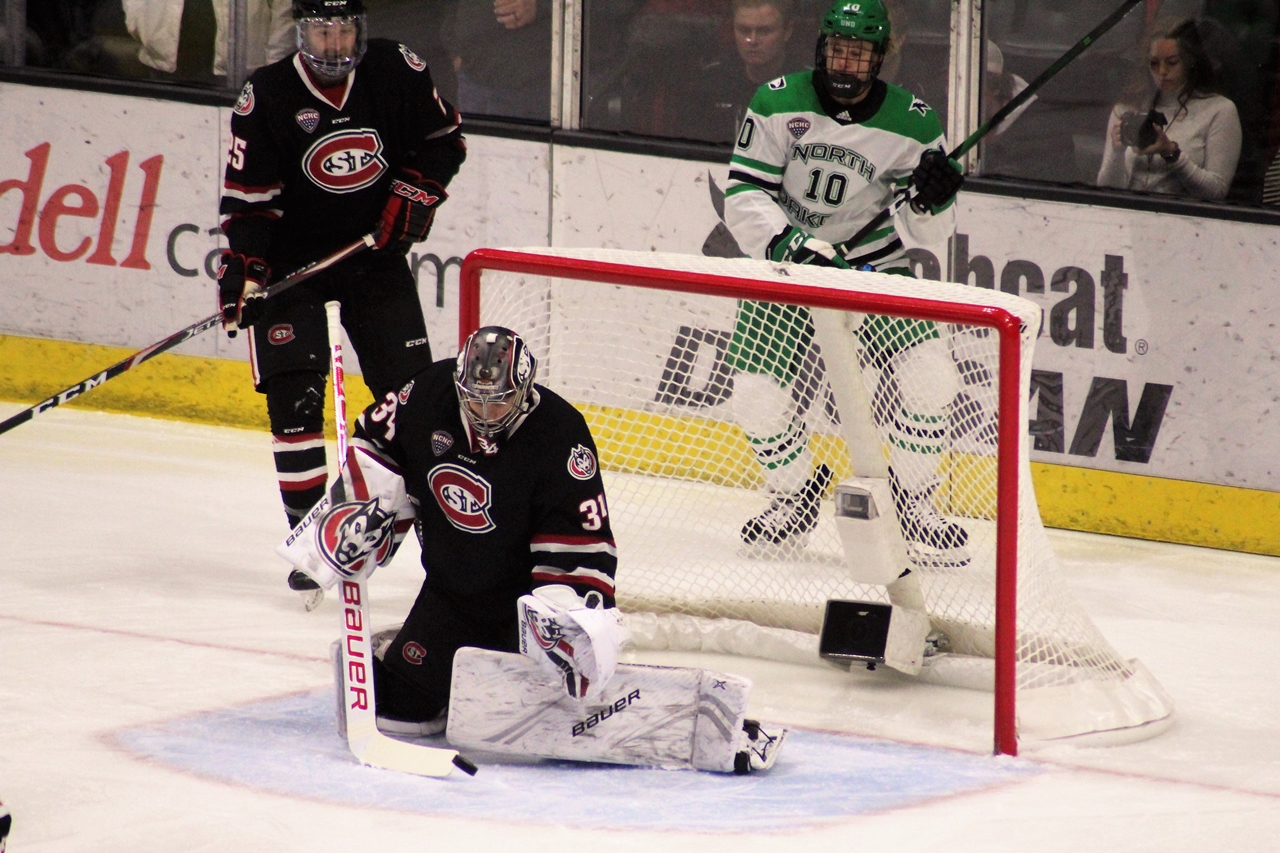 Hrenak tracks a puck and makes a save.

Six games into the season, University of North Dakota hockey fans are wondering what is wrong with their favorite hockey team. Entering the season, expectations are high, they’re expected to vie for a second straight NCHC regular-season title. The season started on a high note with the Fighting Hawks going 3-0-0. Recently, they’ve fallen on hard times.

In his post-game comments on Midco Sports Network, head coach Brad Berry told Alex Heinert and Jake Brandt, “we shot ourselves in the foot, we have to be better.”

Right off the bat, the Fighting Hawks didn’t have a very good start. St. Cloud State would score on the first shift of the game. Fifty-one seconds into the first period, Huskies forward Sam Hentges would score his second goal of the season. That lead didn’t last very long. UND had a great response. Forty seconds later, Matt Kiersted would tie the game with a howitzer from the blueline.

And @UNDmhockey answers right back! 💣

Kiersted with a one-time blast to tie the game

The Huskies would retake the lead with a power play goal from Easton Brodzinski. While killing a penalty, UND would lose control of the puck off of the faceoff deep in their end and before they could react to it. Broadzinski was depositing the puck behind senior goalie Peter Thome. The Huskies would take a 2-1 lead into the locker room during the first intermission.

Three and a half minutes into the second period, UND would tie the game with a beautiful goal from Brendan Budy, his first as a Hawk. You can see the goal above. That lead didn’t last long. The Huskies would score three unanswered goals before Grant Mismash would score on the penalty shot. Looking at the video, I was surprised the goal counted. On the replay, it looked like Huskies goalie Dávid Hrenák touched the puck on the poke check before Mismash shot the puck into the net.

According to UND SID Mitch Wigness, the last time UND scored a goal on the penalty shot was on Feb. 9, 2018,  when defenseman Christian Wolanin scored on Colorado College’s Alex Leclerc.

After the game, Berry broke down some of the things that ailed his team.

“Giving up the power play goal off the lost faceoff was deflating,” Berry said.  Our guys battled hard. We gave up a couple of outnumbered opportunities.  An outnumbered rush off a PK. We’ve got to stick with it. We are undermanned. We have to have a mindset of playing a simple game.  There are some situations where guys are going to get a little more ice time than others.

No one is making any excuses. Nor should they.

“We just got to find a way to battle through and play hockey and win a hockey game,” senior captain Jordan Kawaguchi said.  “We have guys off at a World Junior camp and everything, but it’s next man up mentality. We have to do what we can to win hockey games, and we’re just not doing that right now. We have to figure that out in our group and get back out tomorrow.”

After Saturday’s game, a 5-3 loss to the SCZSU Huskies, UND hockey fans took to the Twitter-verse. What’s wrong with UND? There are a couple of factors. After their third win, UND lost defensemen, Jake Sanderson and Tyler Kleven to the US World Junior team. That’s two high-end defensemen. That may or may not be a factor, but they’re two highly skilled players. Since losing Sanderson and Kleven to team USA, they’ve gone 0-2-1. That’s not an excuse, that’s a fact. While they only played three games apiece, you take four points in three games out of UND’s lineup.

Injuries are also beginning to take a toll. UND has lost Harrison Blaisdell, Judd Caulfield, Harrison Blaisdell, and Ethan Frisch to injury. Frisch and Caulfield were injured today and didn’t return. If Frisch can’t go tomorrow, that leaves UND five healthy defensemen. Also, UND didn’t replace Michell Miller when he was dropped from the team. So, they’re down a d-man. They also had a forward, Massimo Rizzo, that decommitted this past summer that they didn’t replace either.

Based on UND’s play in the defensive zone the last three games, I’d say that the Hawks miss those two players. Again, I not making any excuses, I am just making an observation. First, UND needs to pick up the tempo and play on their toes. More often than not, they’re giving up the blueline too easily. They need to come out of the locker room ready to play at the drop of the first puck. Today, they didn’t do that. They also need to play a smart game. Stay out of the penalty box. In their two losses to Denver and St. Cloud, UND PK went 6/10. You can’t have the opposition scoring on 40 percent of their power plays if you want to win a hockey game.

With that said, I think UND will be fine, they just need to play with more urgency, focus, and discipline. There’s a lot of talent and firepower on the 2020-21 UND hockey team. They just have to regain that confidence.