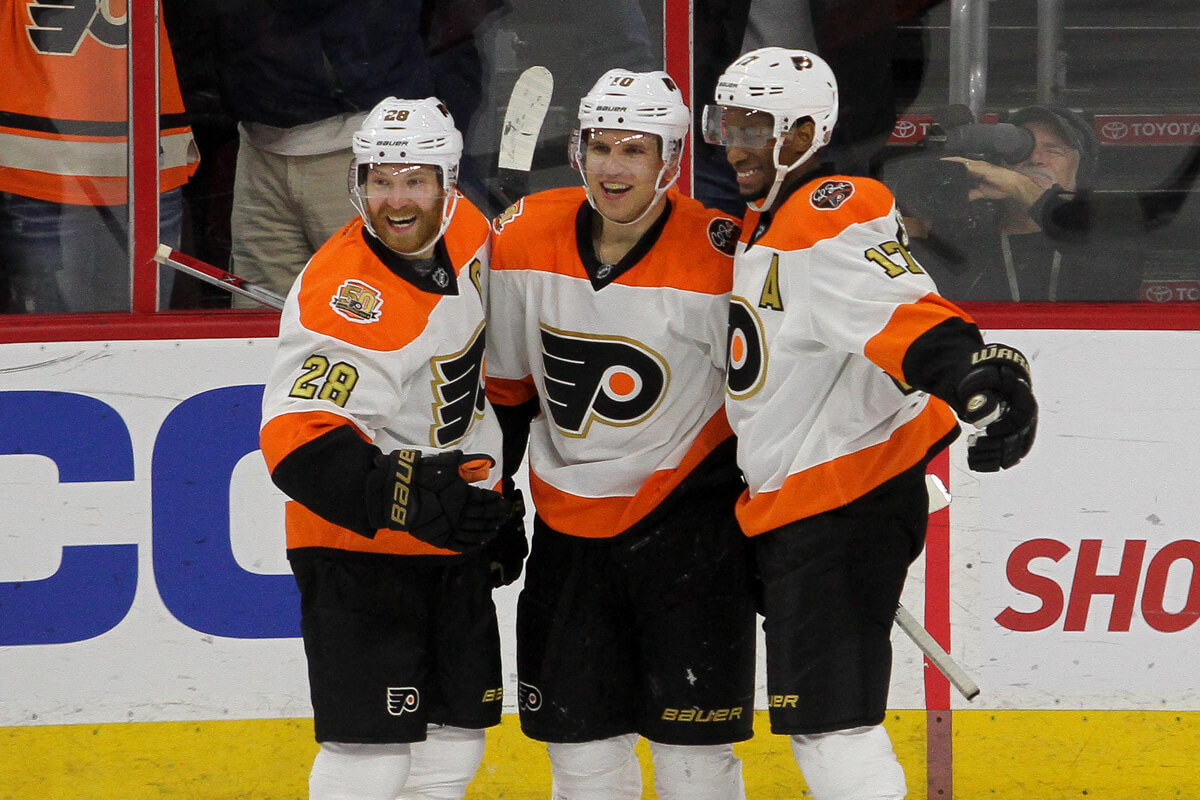 Hockey’s hottest team looked to continue its historic winning streak as the Philadelphia Flyers were looking for its eight straight win today over the Dallas Stars. In thrilling fashion, the Flyers scored 3 goals in the final 4 minutes of the 3rd period to keep the streak alive with a 4-2 victory. It is the first time since 2002 that the Flyers have won eight consecutive games.

The win comes on the heels of a magnificent 3 power-play goal hat trick by Brayden Schenn (his 5th, 6th, and 7th goals of the season). Schenn also added to the stat sheet with a 2nd period fight with Dallas’ Stephen Johns.

Flyers head coach Dave Hakstol was full of praise for Schenn after the game:

“He has done a lot of little things really well over the last… I don’t even want to put a number on it,” Hakstol said. “But he has been doing good things. Scoring the goals is obviously huge. It helps us win the hockey game. What he did coming in and had a great fight, stepping in for one of his teammates. Those are the type of things that you really build that team chemistry with. Great night for Schenner.”

Although Schenn was clearly the star of the day for the Flyers, Philadelphia’s winning streak can be attributed to numerous players stepping up on a nightly basis and in clutch situations to keep squeezing out victories. Whether it be Michael Raffl’s goal with less than 90 seconds to play in the team’s win against Edmonton on Thursday night, or Steve Mason’s superb 42-save night against Florida on Tuesday, guys are elevating their play and it’s rubbing off on the rest of the team.

Brayden Schenn was asked about his rare 3 power-play goal hat trick after the game:

“I said it before, I’m just a recipient of some great plays by the other guys in the group,” he said. “I got a stick on the first one, a high tip on the second one would have actually been funny. And the third one was just a lucky play where it breaks your stick and it’s just kind of the right place, right time.”

Voracek posted his second consecutive 4-point game. Per the Elais Sports Bureau, Voracek is the first Flyer to post eight points over a two game span since Mike Richards did it Feb. 19 & 21, 2009.

When asked if he was doing anything different during the 8-game streak, Voracek had this to say:

“I don’t think I have changed necessarily my game,” he said. “I think even if I went those six games without a point a couple weeks back I don’t think I am playing any different now. Just when you stick with it and when you work hard the points will eventually come, and that is exactly what is happening now.”

After winning its last eight games, Philadelphia has leap-frogged to the 4th seed in the Metropolitan Division and is only 2 points out of the 1st place Penguins. Eventually, the streak will come to an end, but if the Flyers can maintain its chemistry for the remainder of the season, the rest of the NHL better watch out.

The Flyers didn’t have much time to celebrate today’s win as it left for the airport almost immediately to travel to Detroit for a 5pm face off against the Red Wings tomorrow. It will try to reach nine in a row for what would be the first time since April 2-22, 1995.