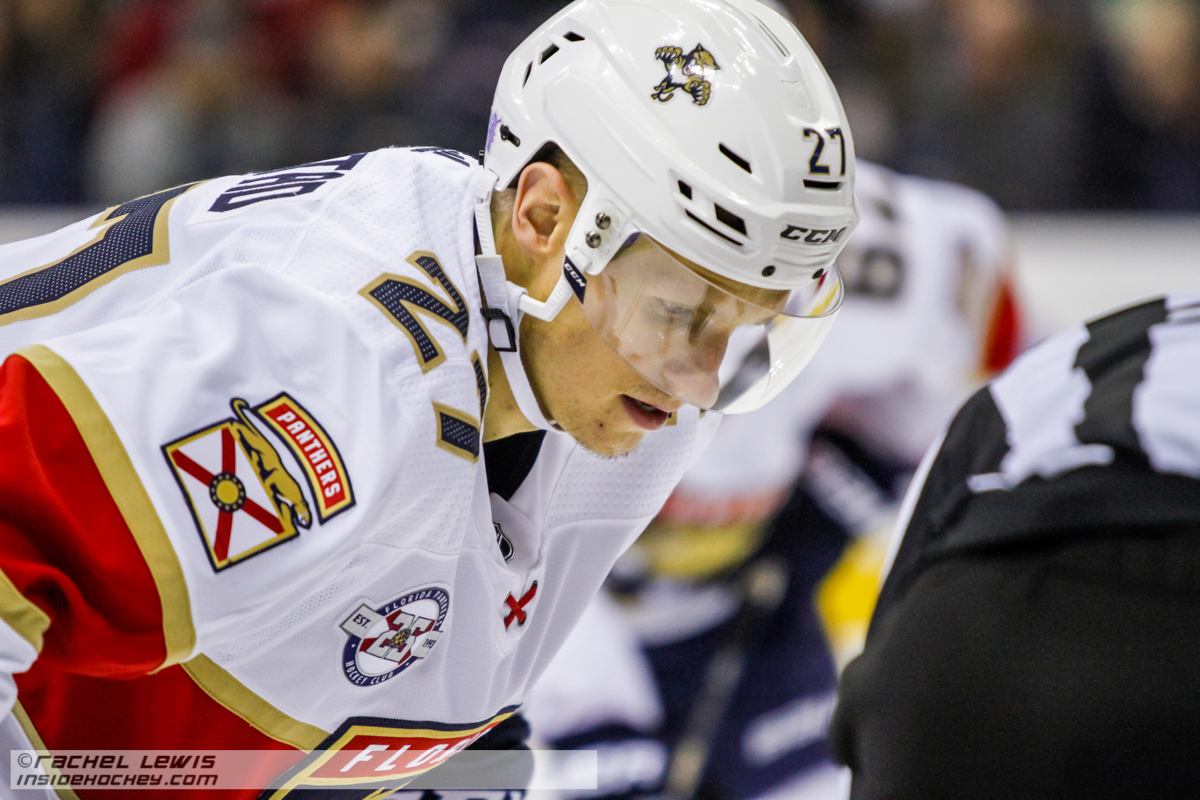 Nick Bjugstad (FLA - 27) gets ready for the faceoff.

If the NHL trade deadline is approaching, you can rest assured that Penguins GM Jim Rutherford is going for it.

“It,” of course, means only one thing for the Penguins’ franchise, where a season that ends with anything less than hoisting the Stanley Cup is equivalent to failure.

So, four days after freeing up space on his blueline – and his salary cap – by shipping defenseman Jamie Oleksiak back to the Dallas Stars in return for the same fourth-round draft pick he used to acquire him in 2017, Rutherford made a much bigger move to shake up his inconsistent team.

Gone to the Florida Panthers are marquee 2018 trade deadline acquisition Derick Brassard, who never quite made the impact the Penguins hoped in a third-line center role, and Riley Sheahan, whose production declined this year in a fourth-line role. Rutherford also shipped a second-round draft pick and two fourth-rounders to the Panthers in the deal.

“To Brass’s defense, he was asked to play a role that’s different than he’s played in his career,” said head coach Mike Sullivan. “[He] and I have had a lot of conversations over the last year or so on trying to help him establish his game in the role we tried to cast him in. Make no mistake, Brass is a very good player. And, even for a guy that I think our expectations were so high of him because we value how good of a player he is, it’s not like he didn’t produce or help us win. I still have so much respect for the person and player that he is; it’s unfortunate that it didn’t work the way we had all hoped.”

Joining the Penguins are Nick Bjugstad, 26 and a big body at 6-foot-6, 215 lbs., with career highs of 24 goals and 49 points, and Jared McCann, 22, who’s having a very good season for the Panthers with eight goals and 18 points in 46 games. Both are former first-round pucks and both can play center or wing, giving Pittsburgh options.

“We think we’ve got two very good players,” Sullivan said. “Nick Bjugstad is a guy that has shown an ability to score in this league. He’s a 45- to 50-point guy. We think he has more upside. He’s still young, he brings more size to our team and a whole lot of skill.

“We think Jared McCann is another young player that can really skate, good penalty killer, can help us become harder to play against. So they’re two guys that we think can fit into the lineup here and play the type of game that we’re trying to play, and they can fill roles that we think we need help in. We’re real excited about these guys; we think they’re going to make us a better team.”