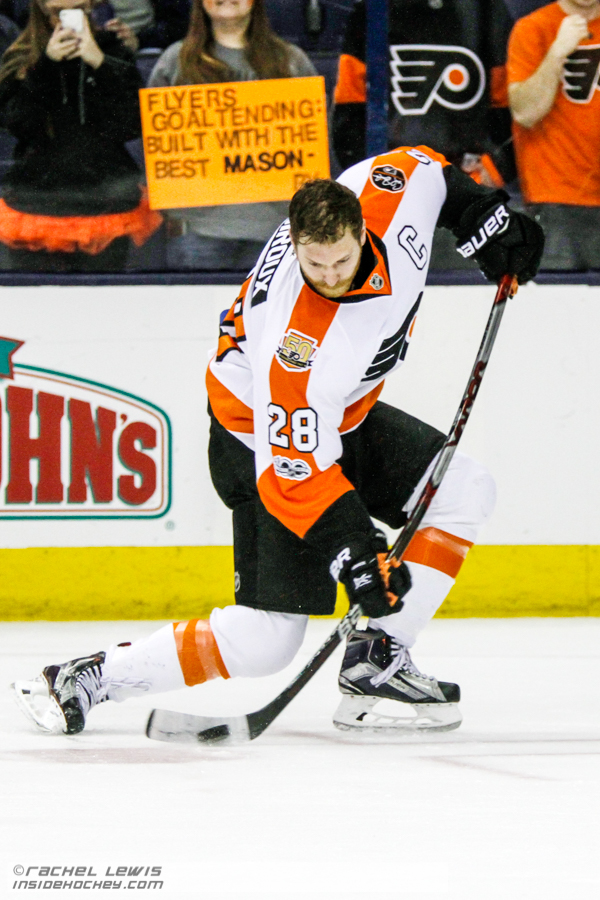 A revitalized Los Angeles Kings team under new coach John Stevens took on a Philadelphia Flyers squad that had played in San Jose the night before and started off the season with a win. For the Kings, it was a good start to what some have seen as a more-of-the-same campaign. But perhaps in a bid to shake that notion from fans’ heads, the coach started three rookies in place of three veterans. LA scratched C Andy Andreoff, C Nic Dowd, and D Paul Ladue, the latter who had been called up from the Ontario Reign (AHL) earlier in the day. The team dressed three rookies: C Alex Iafallo, D Oscar Fantenberg, and D Kurtis MacDermid in an effort to show that it’s not just the coaching and GM staff which has changed.

The one who made the most impact: Iafalla, though he recorded just a shot and a hit on the night. He gave Los Angeles its best early chance when he passed to Anze Kopitar, who redirected the puck toward the open right side. Michal Neuvirth stretched out his glove for the save.

In the end, Trevor Lewis and Tyler Toffoli scored and Jonathan Quick recorded 35 saves as the Los Angeles Kings defeated the  Flyers 2-0.

The Kings (1-0-0) fired 27 shots as they faced the Flyers in their home opener for the second year in a row. Quick earned his 45th NHL shutout in the win. For their part, the Flyers (1-1-0) recorded 17 third-period shots.  Neuvirth took the loss in net.

Kings Coach John Stevens, making his Los Angeles head coaching debut, said he figured the Flyers would be a test: “I thought it was going to be a bit of a challenge just because Philadelphia played last night and I thought they were up to game speed,” Stevens said, “We got off to a good start, though we kind of let up in puck management in the third period.”

Stephens was quick to share credit for the win, saying that “There were other guys in line ahead of me for the game puck, with three kids in the lineup tonight. That was their first NHL game, and I’d rather they have it instead of me.”

One of those young Kings players, Alex Iafallo, said, “A good friend back home couldn’t believe that I made it. There’s a game in Buffalo at the end of February, and he said he’s going to get tickets already. I’m just very thankful for everybody’s support here.”

Across the dressing room, game-winning goal scorer Lewis commented on his line’s play after the game. “We are just kind of building that chemistry. I think that’s why they’ve kept us together throughout the preseason. I think that we’re building, and that’s what we’ve got to keep doing,” he analyzed.

Philadelphia coach Dave Hakstol saw positives despite the loss, commenting, “I thought we generated a little more tonight than we did last night, particularly five-on-five. We couldn’t find a way to put one in the back of the net. Their goaltender played well. It’s a tough time of year, when it’s the second day of the season, to be playing on a back-to-back. Effort-wise, intensity-wise, those things were there throughout the game, especially with a good push in the third period.”

The Kings weren’t the only team to dress some newbies. Philly had four of them on their bench. Flyers rookie defenseman Travis Sanheim talked about his debut: “I thought I could play a lot better, and I should have felt more comfortable in the third with my feet under me. I need to play more of my game and make plays. I wish I could have done that early, but obviously, with it being my first game I was a little hesitant early and I wish I could go back and tell myself to get a lot more comfortable and start getting up the ice and playing my game,” he indicated.

Despite other games around the league going to ridiculous scores, that was not to be the case in LA. Neither team scored in the first period despite each having a power play. Philadelphia ended the period with a 10-9 advantage in shots.

Los Angeles opened the scoring on Lewis’s goal at 6:16 of the second period. Kyle Clifford forced a turnover in the neutral zone and carried the puck down the right-side boards. He dropped a pass to Nick Shore, who whipped the puck cross-ice to Lewis for a one-timer from the edge of the crease.

The Kings added the insurance goal by Toffoli at 17:39 of period three. Jeff Carter skated down the left boards and backhanded a pass to the slot for Toffoli, who flipped the puck into the top right corner. Tanner Pearson got the secondary assist.

For the Kings, defensemen Fantenberg and MacDermid, played 17 and eight minutes respectively, and recorded no offensive statistics. In fact, all six points on the two goals were by forwards. Ironic, after defenseman Muzzin led the team in scoring in the preseason.

LA placed D Alec Martinez on IR retroactive to October 3rd.  The Flyers scratched three players, including rookie Samuel Morin, but that left four Philadelphia players appearing in their first NHL game. The other scratches were C Jori Lehtera and D Brandon Manning.  Last season, the Kings and Flyers split a pair of games, with the visiting team winning one game apiece. The two teams meet in Philadelphia on December 18th.