Lowell, MA. – To the University of Alabama-Hunstville the difference in this game probably felt much like the change in temperate that they experienced this week. On Tuesday it was over 100 degrees in Huntsville. Today in Lowell the high was 60. For the first two periods the Chargers were in this game, only trailing 2-1 with less than 15 minutes to play. Then like the temperature, their game just dropped. Two goals in just over two minutes blew this one wide open.

The River Hawks wasted no time in jumping out to a 1-0 lead when senior Colin O’Neill jammed home the puck in the Charger crease. Mark Sinclair made the initial stop on a Jon McDonald shot from the bottom of the left circle but O’Neill struck before Sinclair could get a whistle from the ref at 1:21.

The Chargers had the first power play opportunity of the game, just :20 after giving up the goal, when freshman Carl Berglund was whistled for Tripping. The River Hawk penalty kill did a good job of keeping the Chargers to the perimeter of the zone.It was a chippy affair for two non-conferences foes. At 14:15 UAH’s Drew Lennon was sent off for Hooking. UML’s power play threatened Sinclair a few times, two shots trickled just wide of his goal. Sinclair made a nice glove save on a Seth Barton shot from the blue line. Huntsville’s Connor Merkley was called for Slashing at 18:57 followed by Daneel Lategan whistled for Cross-Checking, UML’s brief 5 on 3 opportunity was negated just before the buzzer when Barton was called for Hooking, the first ended with the River Hawks up a man and up 1-0. The River Hawks outshot the Chargers 11-8 for the period and outdrew them 16-8 in face-off wins.

The second frame had UML pressure from the start. At the end of the carried over UAH power play Barton, just out of the penalty box raced in on a breakaway but Sinclair shouldered the puck over the net. Barton was called again, this time for Slashing at 4:18 and Connor Sodergren was whistled for Hooking at 4:49 giving the Chargers a five on three opportunity. UAH was limited to passing along the boards as UML’s penalty kill pressured the Chargers attack. UAH had solid chance on a three on three rush, Merkley split two of the UML defenders and was in on Tyler Wall but the senior made an easy save.

Five minutes later Zach Keiser give UAH another power play after he was sent off for Interference. Senior Kenny Hausinger gathered a lose puck at the UAH blue line and was in alone on Sinclair. He roofed a shot past the keeper’s glove for the short-handed goal and a 2-0 lead. The Chargers still had some fight left in them before the period was over. A two on one opportunity had Jack Jeffers set up Christian Rajic to bury a shot past Wall cutting the deficit to one. UML was outshooting UAH 24-14 after two periods. 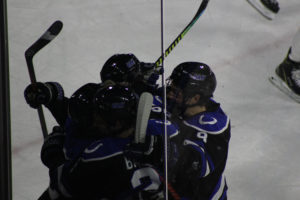 The third period is one UAH coach Mike Corbett would like to have back. “Obviously, I’m looking at the final numbers here, that two minutes and change here between 6:12 and 8:27 mark, that’s the difference in the game. They get those two quick goals and it goes from 2-1 to 4-1. That’s obviously the time I want back,” said the seventh-year coach. Connor James was called for Goaltender Interference at 5:56 as UAB had been pressuring Wall and the River Hawks. On the subsequent power play, an O’Neill slap shot from the top of the right circle was deflected, Hausinger fired the puck towards an unsuspecting Sinclair who’d lost the puck, and Matt Brown knocked home his first collegiate goal for the 3-1 lead at 6:12. “We needed the next goal, they wanted the next goal,” said Corbett of the third goal.

A defensive zone lapse by the Chargers led to Zach Kaiser scoring his first collegiate goal as well, when he was all alone in front of the UAB net and put home the dish from Brown behind the net. The River Hawks fifth and final goal came in the same fashion when Andre Lee, also a freshman scoring his first goal, took a pass at the post from Berglund and beat Sinclair.

Senior Hausinger gave props to his freshmen teammates after the win. “They were awesome, they have a very strong class,” he said. “That just speaks for our depth as a team. We have a lot of freshmen (five) that played tonight and played very well. They fought through that nervous energy and anxiety and played really well.” Four of the five freshmen factored into the scoring tonight, and the one who didn’t, Marek Korencik, finished as a +2 for the night. Their coach had other thoughts about their performance. “They played fine,” said UML coach Norm Bazin when asked to follow up on Hausinger’s comment. “Yo know, I thought (Tyler) Wall was the difference tonight. They had a breakaway and a partial breakaway earlier and he kept us in there. I thought that was the difference. It’s great to have, when you’re a freshman and you come in and you get a contribution right away because it kind of takes the monkey off your back, you can relax and breath a little bit, and that’s always nice. However I thought the difference maker tonight was Wall.”

The River Hawks outshot the Chargers 34-19 for the game and won the face-off battle 43-15. The two teams will face-off again on Sunday at 4:00 PM at Tsongas Arena in Lowell.