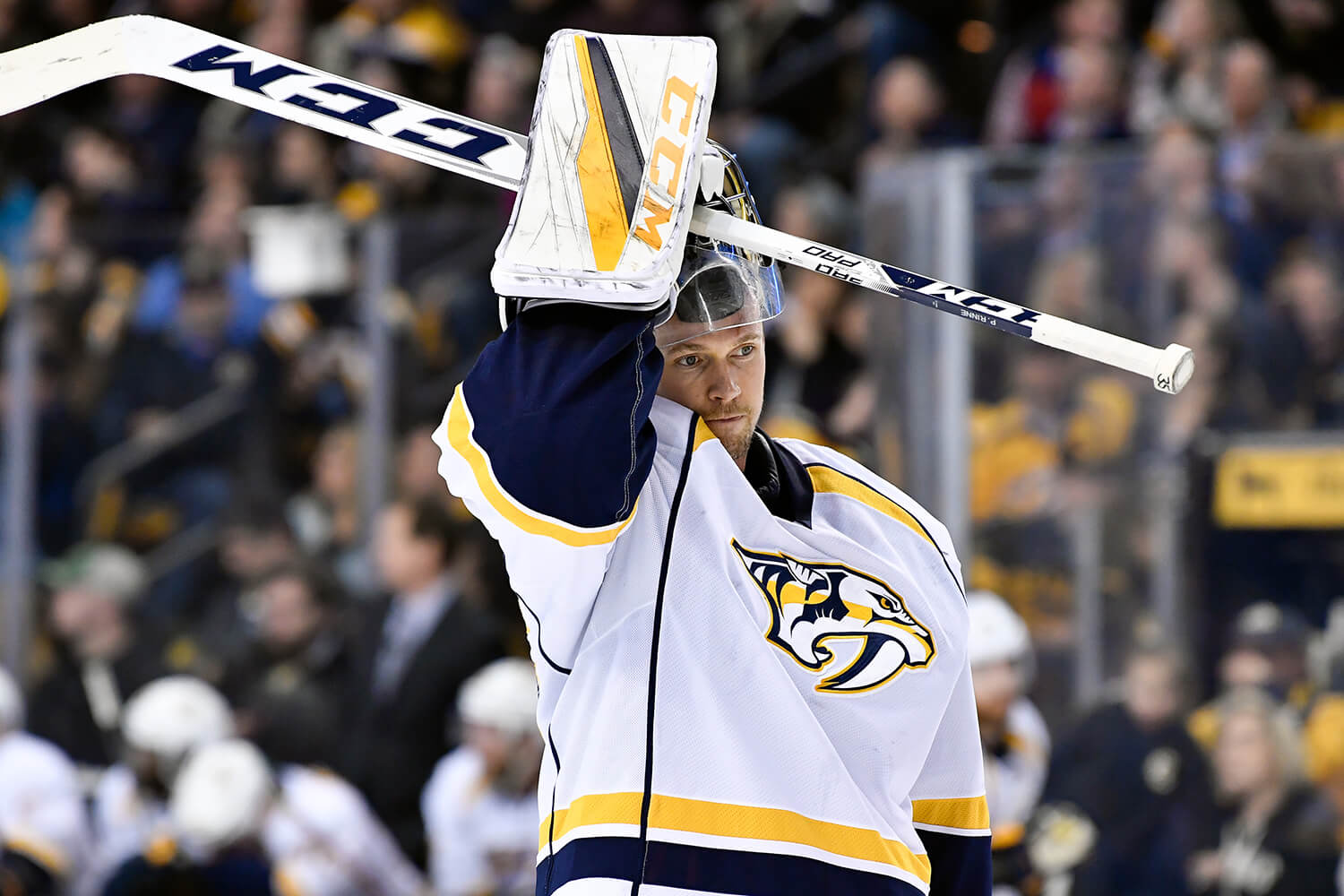 Rinne, Nashville Bounce Back with 5-1 Win

For the Penguins, the plan was simple. Go into Nashville’s loud, hostile territory and get off to a quick start by playing smart, simple hockey.

They did that, with a goal from Jake Guentzel – who else? – to quiet those passionate fans, just 2:46 in.

The kid will not stop scoring. #StanleyCup pic.twitter.com/NsYcqP8IBy

But then, despite getting what Sullivan called “good looks,” Pittsburgh couldn’t take advantage of a power play two minutes later to extend the lead.

They had another chance later in the period, and this time – as it has for most of this Stanley Cup Final series – the power play not only didn’t convert, but gave Nashville a boost.

The Predators finished the period strong – outshooting the Penguins, 12-6. And, early in the second period, with Pittsburgh defenseman Justin Schultz in the penalty box, Roman Josi didn’t waste the chance.

That was just the start of Josi’s big night, which ended with a goal and two assists and made him the first defenseman to score three points in a Stanley Cup Final game since Chicago’s Duncan Keith in 2010.

One of those assists came just 42 seconds later, when Frederick Gaudreau put the Preds on top for good.

That didn't take long. 42 seconds after Josi's goal, Frederick Gaudreau adds another as the @PredsNHL take a 2-1 lead with 13:27 left in 2nd pic.twitter.com/S9oOGqluih

After that came a backbreaker from former Penguin James Neal with just 23 seconds remaining in the period. Instead of the Penguins going to the locker room with a one-goal deficit, the game felt significantly more out of reach at 3-1 – especially in a building where the Predators had gone 7-1 in the playoffs.

“Obviously wasn’t the start we were looking for with going down two games in Pittsburgh,” Neal said. “But it’s a place we feel confident in coming home. It comes from the players in the room, a belief in each other that we can win a hockey game if we need to win a hockey game. We got the job done.”

“And our own power play needs to be better, too. We had opportunities to build on the lead, and we didn’t.”

The third period didn’t get any better, with the Predators adding goals from Craig Smith and Mattias Ekholm – the latter on the power play, where Nashville went 2-for-3 – to seal the 5-1 win and get them back into the series, which they now trail, 2-1.

Meanwhile the Penguins’ power play came up empty on as many opportunities. They allowed Nashville’s penalty kill to keep them largely to the perimeter of the ice, limiting them from getting high-danger scoring chances. Crosby and Evgeni Malkin were held without a shot, not just on the power play but throughout the contest.

“We have to be better,” Sullivan said of the sputtering man-advantage. “I don’t think we’ve executed as well with what we’re trying to accomplish against the type of penalty kill that we’re up against.”

It also helped that Nashville goaltender Pekka Rinne looked more like the version of himself that had won the Predators’ first three playoff series, as opposed to the one who showed up in Pittsburgh for Games 1 and 2 and posted a .778 save percentage.

Game 3 marked the first time Rinne had beaten the Penguins in his career, and he earned first-star honors for stopping 27 of Pittsburgh’s 28 shots on the night – including a set, off-the-pads play the Penguins had connected on twice earlier in the series.

“He was terrific,” said Predators head coach Peter Laviolette, who pulled Rinne in Game 2 but said “there was no decision” about whether to go back to him for Game 3.

“He’s been the backbone for our team, and his game tonight was rock solid. He saw the puck well. He moved well. He got out and stopped pucks. He set up pucks for our defensemen. He made timely saves.”

Pittsburgh’s Matt Murray, meanwhile, looked a little less invincible than he had in the first two games. Were there any he’d like back?

“All of them,” Murray said, but added that he thought he was well-positioned for most.

“I thought I was in the right spot on almost of all of them. A couple weird bounces. The [Smith] breakaway, maybe I thought I could’ve made a better play on it. But I was pretty happy with my positioning. It’s just about making the save.”

The good news for the Penguins? They’ve rebounded well after playoff losses, including particularly lopsided ones like this. Murray has also never lost consecutive games in his two-season NHL playoff career.

“You’ve got to take the positives out of a game like this,” the goaltender said. “A loss is a loss; it doesn’t matter what the score is. Once it’s over with, you put it behind us.

“We knew it wasn’t going to be easy by any means. It’s the Stanley Cup Final. We knew we were going to go through some adversity at some point; it’s about responding to it. Take what we can from it, learn from it and move forward.”