Allston, MA. –     The Golden Knights of Clarkson University, ranked ninth in the nation, come onto the Harvard University campus as the hottest team in college hockey. Clarkson has won their last eight games. The Crimson meanwhile have been inconsistent since returning from the winter break. Harvard is 3-2-1 in that stretch. This rivalry dates back to 1935, and when they hit the ice there is no love lost. Harvard holds the slight edge in the all-time series 57-55-12, but Clarkson ended the Crimson season last year in Lake Placid in the ECAC Hockey semi-finals. The Golden Knights lost in the finals but did make the NCAA tournament.

Just two points separate the two teams in the ECAC standings. Clarkson is in fourth with 14 points while Harvard is in sixth with 12. The Golden Knights are a throwback of sorts as they are a big and physical team, especially on defense where every player is over 6’-1”. Sophomore Connor McCarthy leads the way at a massive 6’-7”.  The Crimson, with their speed and finesse, are a deceptively physical team. This set the tone for a rock ‘em, sock ‘em affair all night.

The Clarkson offense is powered by Juniors Nico Sturm, Haralds Egle, and Sophomore Jack Jacome. The trio has combined for 65 points thus far. It didn’t take long for them to get going tonight. Harvard defenseman Adam Fox was leading the breakout of the Crimson zone when he lost the puck after apparently being high-sticked. The non-call led to a continuation of play in the Harvard end. With three Crimson defenders below the goal line, Jacome fed a wide open Sturm out in front of Harvard goalie Michael Lackey for the 1-0 Golden Knights lead at 3:51.

Harvard answered with pressure of their own when Senior Michael Floodstrand tried to bang home a rebound to the left of the Clarkson net. Fox, Jack Badini, and Nathan Krusko created a chance that Jake Kielly, one of the top goalies in the NCAA, couldn’t stop. Badini raced along the right side of the zone and backhanded a shot past Kielly at 18:16 tying the game at 1-1. The Crimson outshot Clarkson 13-7 for the period, and like the score the face-off battle was tied at seven apiece.

The second period was a frenetically paced back and forth affair. Almost a minute and thirty into the period Clarkson hit the post and the puck was slowly rolling towards the goal. Lackey was able to turn around and glove the play dead. Just a few seconds later Badini would strike again. Leading a two on one opportunity on Kielly, Badini snapped the puck past the goalie’s glove side for the 2-1 Crimson lead at 2:10. Krusko would get the assist on this goal also.

A funny neutral zone bounce would see Clarkson’s Jacome in a foot race with two Crimson defenders. Jacome had a step on Fox but the defenseman was able to disrupt the Clarkson forward enough to allow the easy save for Lackey. Henry Bowlby made it 3-1 Crimson when he slid a Floodstrand pass through Kielly’s legs at 12:06. Clarkson outshot Harvard 14-6 this period but it didn’t feel that way. 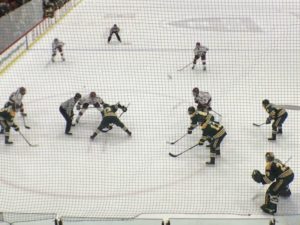 Harvard’s Jack Badini lines up to take the face-off that leads to Reilly Walsh’s game-winning overtime goal vs Clarkson.

The Bright-Landry Center was hopping as the third period got underway. Both schools had their pep bands in attendance which added to the atmosphere for this classic ECAC match-up. Clarkson travels well, which always helps the college hockey drama.

Clarkson pulled to within one when Freshman Josh Dunne threw a shot on Lackey from the right side that managed to find the back of the net. 3-2 at 9:06. Clarkson’s pace was intense after this goal. Even after a solid shift by the Crimson, the Clarkson rush down the other end led to a game-tying goal at 13:50. Crimson defenseman Reilly Walsh’s stick play redirected the puck through the outstretching legs of Lackey as the goalie slid across his crease. Freshman Anthony Callin was credited with the goal, while Sturm was given the assist.

Like their last meeting in Lake Placid last year, this one would need to be settled in overtime.  After three periods the Crimson outshot the Golden Knights 39-31. Harvard controlled the play for the extra time, but Kielly was there to turn aside from any shot that wasn’t blocked by a Clarkson defender.

After a Harvard timeout, the face-off was in the Clarkson zone, Jack Badini cleanly won the drawback to Walsh at the point. The Sophomore defenseman who’s stick led to the game-tying goal now used it to blast a one-timer past Kielly for the overtime win at 2:12. The Crimson now move into fifth place in the ECAC.

Reilly Walsh added “We stayed with it. We deserved to win that game. Luckily we won.” Reilly said they discussed the draw during the time out prior. “We talked about the play before we went out there, and Badini was pretty set on what he was going to do on the face-off. So I was just kind of waiting for it. I knew that if I just put it on net right away far side that he (Kielly) wasn’t going to be able to get there.”

The Golden Knights travel to Hanover, NH to take on Dartmouth tomorrow night at 7:00 pm. The Crimson will play host to St. Lawrence here in Allston at 7:00 pm as well.