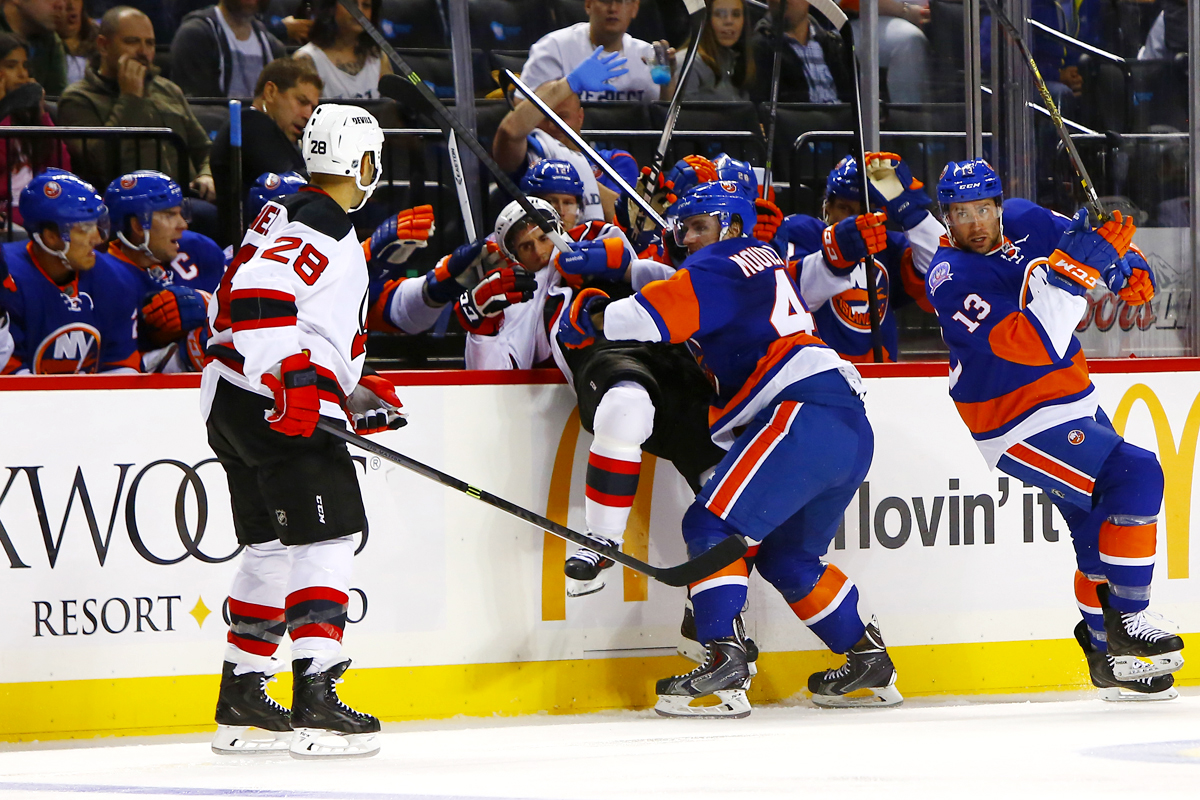 Redemption Sweet for Mouillierat and Isles

It was a quick and decisive turnaround for Kael Mouillierat.

The 27-year-old rookie was not a happy man after the Islanders 4-0 loss to the Vancouver Canucks on Sunday. He committed two penalties in that game which led to a pair of power play goals by the Canucks that helped Vancouver put the game out of reach.

Just two days later, however, Mouillierat was on top of the world. He collected his first NHL point when he assisted on Matt Martin’s game-winning-goal at 3:18 of the third period and then scored his first NHL goal just 3:58 later as part of a four-goal barrage for the Isles over 5:52 that gave the Isles a 5-1 win over the Arizona Coyotes.

“I was kind of hard on myself after the last game, taking a couple of penalties,” Mouillierat admitted. “It’s great to get the other end of the feeling now, especially with a big win like that, it’s great for the boys.”

The Edmonton native took the long road to the NHL which made his first goal even more satisfying. Mouillierat was undrafted and spent four years playing college hockey at the University of Minnesota-Mankato. After that, his hockey journey took him to Idaho of the ECHL, briefly to the AHL’s Texas Stars and then additional AHL stops at St. John’s and then Bridgeport.

He finally made his NHL debut with the Islanders in Washington last week. At the time of his emergency recall, he was leading the Sound Tigers with 18 goals and 40 points.

So far, Mouillierat’s teammates have taken to him. “I’d never played with him before but just from the few games that I have, he’s got poise, especially in his own end,” said forward Matt Martin after the game. “He’s willing to make plays and he’s confident with the puck. He’s playing smart and it’s good to see him get rewarded with a goal.”

Mouillierat’s first NHL goal was everything he imagined it would be. “It was a long time coming and it’s a great feeling,” he said.

The puck was saved for him and he already knows where it will be heading. “My parents were out here for the first two games, but they had to catch a flight home so they missed this game,” Mouillierat said. “It came a game late, but I’ll send it back home.”

Goalie Chad Johnson appreciated the rookie’s effort and determination. “He works extremely hard. Everybody’s been there in that situation, being called up,” Johnson said. “For a goalie it’s getting a win or shutout, for players it’s getting a goal. It’s something he’ll always remember and for everybody, it sort of brings back memories for everyone around this room for their first goal. It’s exciting and he’s been a good player for us.”

Coach Jack Capuano was also pleased with how Mouillierat responded after Sunday night’s penalty-filled performance. “It was great seeing him bounce back,” Capuano said. “He was really good in his own end tonight and he got rewarded on offense. I’m really happy for him.”

In three games, Mouilierat now has a goal and two points. He hopes he can make an impression on the team and prove he can play at this level.

Regardless of what the future holds, tonight was a night that Kael Mouillierat will never forget.

The win improved the Isles record to 40-20-2 on the season and kept the team atop the Metropolitan Division standings. This is also the first time the Isles have won 40 games in a season since 2006-07.

The loss was the seventh straight for the struggling Coyotes.

Prior to the game, the Islanders announced the signing of defenseman Nick Leddy to a seven-year contract extension worth a reported $38.5 million.

The Isles return to action on Friday night when they host the Calgary Flames.