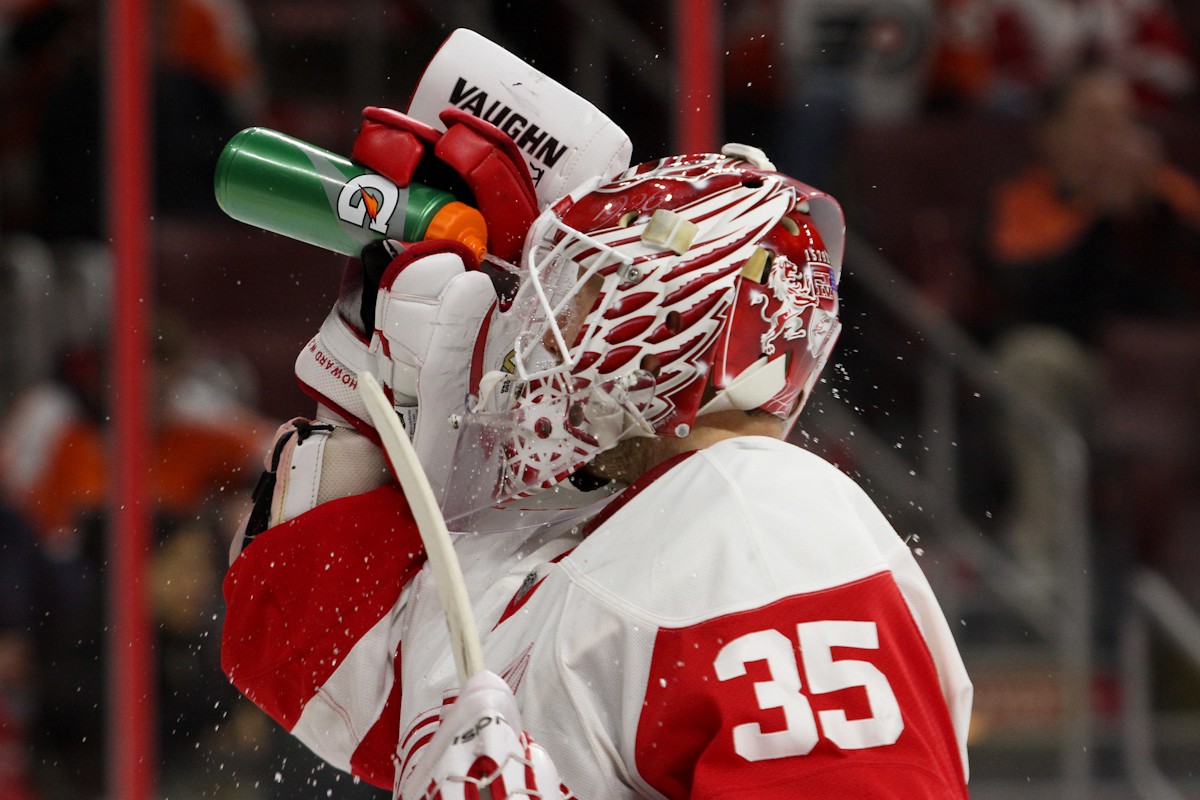 The Detroit Red Wings face off against the Tampa Bay Lightning for the very first time in a playoff series this week. The Red Wings reached 100 points this season, which was quite an achievement for a team still going through a transitional phase. It was predicted before the season started that “maybe” they would make the playoffs, and they did on the next-to-last game of the season. With potential three-point games during the season, a team needed 100 points or close to it just to make it in. This is due to parity, which has been established since the 2005 lockout. Last year’s Stanley Cup Champion (Los Angeles Kings) and President’s Trophy winner (Boston Bruins) failed to qualify for this season’s playoffs.

The Tampa Bay Lightning finished second in the Atlantic Division, while the Detroit Red Wings finished in third place. The Lighting were 2-1-1 against the Red Wings during the season, and two of the games were blowouts by both teams, the other two games were close. The Lightning are a big team, as 9 of their players are over 6 ‘ 2”. Two of those players are the goaltenders. Ben Bishop is 6’ 7” and backup goal tender Andrei Vasilevskiy is 6’3”. Shooting the puck at Bishop is like shooting at a house. Bishop has played well, but has yet to play in a playoff game. It seems the only way to beat him is to get him to move laterally.

The Tampa defense is led by 6’6” Victor Hedman and also includes 6’7″ Andrej Sustr, so skating toward the Lightning net is akin to skating past two trees and shooting the puck at a house. Another defenseman Jason Garrison who is 6’3’ has been a steady contributor. The other defensemen are very good even though they are less than 6’2” like Anton Stralman. The forwards speak for themselves starting with Steven Stamkos who scored 43 goals and had 72 points during the 2014-15 campaign. There is also Tyler Johnson who scored 29 goals. Add Nikita Kucherov scoring 28 goals. Veteran Brian Boyle who is 6’ 7” provided 15 goals, so there is a balanced attack in the lineup. The Lightning are preseason favorites to win the Stanley Cup, so there is more pressure on them.

The Detroit Red Wings have been an unusual team this season, as they were rolling along through the schedule, including a heavy road laden schedule in January and February. Going into March with more home than road games, they looked liked they could win the Conference. Goaltender Jimmmy Howard was playing great, but injured his groin in January at Washington.
Backup Petr Mrazek played spectacular in his place, as original backup goaltender Jonas Gustavsson was dealing with various injuries. Gustavsson is still out with a concussion.

When March came, Howard struggled and has yet to regain his form to date. Mrazek also struggled. Mrazek did play well in the season finale at Carolina and has been selected to start the playoffs. Adding to the March and beyond problems was an injury to Pavel Datsyuk who missed almost 3 weeks. Another loss is Johan Franzen who has been out with concussion symptoms. Another loss is Erik Cole, who was acquired at the March trade deadline with Marek Zidlicky. Cole has a spinal contusion, which may end his career (he suffered a broken neck in 2006). Both are two bigger players who will be missed by the Red Wings during the playoffs.

On defense, the Red Wings have been the most unpredictable, with sloppy play and turnovers making it difficult for the goaltenders. The most efficient defensemen have been Kyle Quincey and Danny DeKeyser. Niklas Kronwall seems to try to do too much sometimes, and Brendan Smith – while having the physical tools – has turned over the puck too much. Alexey Marchenko who played in the last game of the season is slated to start in his place. Jonathan Ericsson is probably having his worst season on record. Zidlicky has given the Red Wings a boost being a right hand shot, even though he is not the best skater. Obviously, goaltending and defense are big problem areas for the team.

The forwards have done a good job this season, and this includes the younger players who were like deer’s in the headlights against Boston during last season’s playoffs. They are Tomas Tatar (29 goals), Gustav Nyquist (27 goals), and, Luke Glendening (12 goals). Justin Abdelkader also chipped in with 23 goals. The keys to the Red Wings are Pavel Datsyuk and Henrik Zetterberg maintaining their health. More than likely one or both will be assigned to watch Steven Stamkos. The Red Wings had the second ranked power play this season, and for a while had one of the top penalty kills in the NHL, but like everything else from March forward the PK dropped to 18th place.

The Lighting had the most wins at home this season (32), and were the top scoring team in the NHL . Both goaltenders Ben Bishop and Petr Mrazek have no playoff experience, so that factor may make things interesting. To win in the playoffs, a team needs 1) goal tending, 2) good special teams play (PK & PP), 3) health, and 4) puck luck. As mentioned Tampa faces pressure since they are the favorite. Tampa has big players, but doesn’t really play a physical game, which should help Detroit. Tampa’s players are somewhat inexperienced when it comes to the playoffs. Unless the Red Wings play a smart structured game, stay out of the penalty box, and have good goal tending they will have a short series.