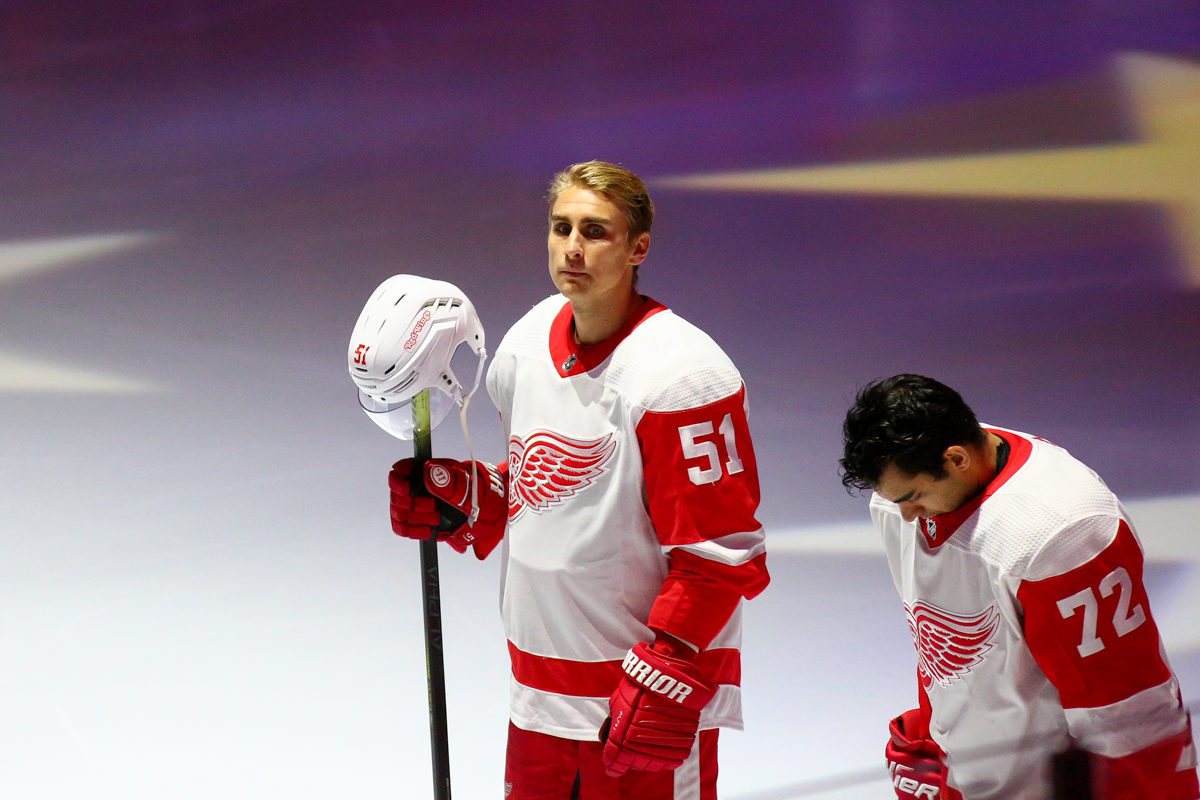 TAMPA – Tampa Bay Lightning goalie Christopher Gibson received a rude return to the NHL on Sunday afternoon as the Detroit Red Wings netted three goals in the last 3:55 of the second period to roll past Tampa Bay, 5-1, in the second game of a back-back.

Gibson, a Finish native, spent five years with the New York Islanders organization where appeared in 14 games, starting ten, and last played in the league in 2018. The Lightning signed him in early October to a 2-way contract. He was given the start as backup goalie Curtis McElinney was out due to illness.

“I felt for the first 35 minutes of the game we had the puck most of the time,” said Lightning coach John Cooper. “We weren’t generating a ton, but we had our looks. We had a few subtle little things happened in a span and the puck ended up in the net. That doesn’t happen that much either.”

The offense has been a concern over the last for games as Tampa Bay has only scored 7 goals in 127 shots. Tampa Bay has also scored only one power play goal in 11 chances of that time as well.

“You start taking short cuts to try to score, but the only way you can work your way out of it is to working your way through it,” said Cooper. “Pucks that normally will not go in will start going in. It’s the cycle of hockey. We just have to work our way through this.”

Michael Rasmussen and Valterri Filppula broke open a tight game late in the second period as they scored off of Gibson some 29 seconds apart and gave Detroit what wound up to be an insurmountable 3-0 lead.

Fillipula scored at 16:05 when Luke Glendening found him waiting in the left circle as Glendening’s cross-ice pass hit Fillpula on the blade and he delivered for a 2-0 Detroit lead.

Rasmussen was the opportunist as Gibson failed to stop a puck that came off the right board.

It slid under his glove and Rasmussen was waiting outside the crease to post his third goal of the season as the Red Wings gathered a 3-0 advantage at 16:34 in the second.

The clincher came when Marc Staal fired a slap shot by Gibson at 18:58 that gave the Red Wings a 4-0 lead after 40 minutes.

After Victor Hedman got the Lightning on the board at 4:12 and despite nine shots on goal in the third period, Cooper pulled the goalie at 14:00 which ended up in a Darren Helm goal at 14:19. Tampa continued to play without a net-minder for the rest of the game and failed to score on two late power plays.

Tampa Bay had a couple of opportunities in the first two periods, but couldn’t connect.

The Bolts had a solid scoring chance at 7:08 in the second when Steven Stamkos collected the puck with an odd-man advantage as he fed Victor Hedman, who immediately returned the pass. Stamkos took a high slap shot, but Red Wings goalie Thomas Greiss deflected it to hold the score at 1-0.

Just over 13 minutes into the game, Tyler Johnson mishandled the puck as he was flying to the crease. he atones for this at at 15:20 when he handled a turnover in the Detroit zone and put pressure on goalie Tom Greiss. Johnson had inside position on Flip Hornek who drew the game’s first penalty for holding at 15:42.

The Red Wings got on the board first in taking advantage of Lightning rookie Christopher Gibson, who was making his first career start.

After a slashing penalty on Luke Schenn put Detroit on the power play at 18:45, Dylan Larkin gathered a puck behind the left circle and  fired a wrister by Gibson at the 5-hole which gave the Wings a 1-0 lead after one period.

The Red Wings ended a string of 17 consecutive losses in Tampa Bay with Sunday’s win and it was the Lightning’s first loss on a back-to-back.