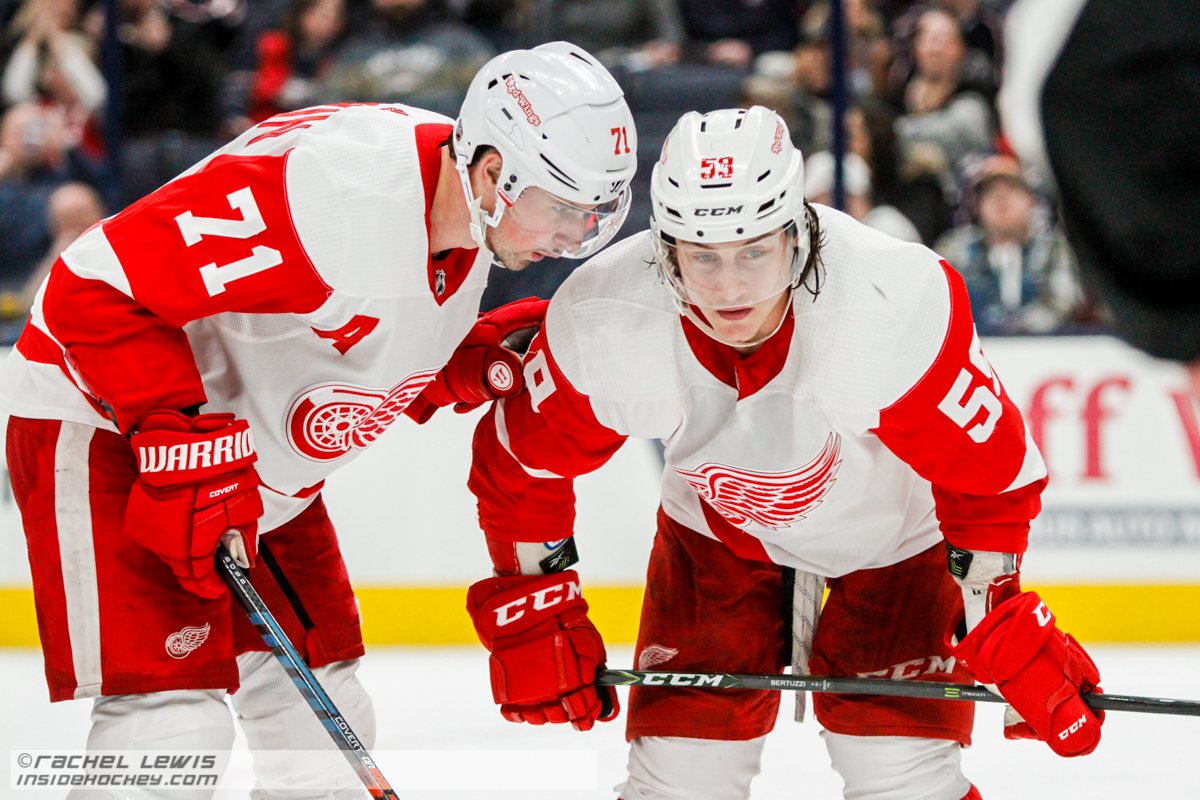 After a litany of pandemic disruptions, the NHL plans to play a full 82-game schedule this season with regular divisions and 16-team playoff bracket. There are now 32 teams in the league, with the Seattle Kraken joining.

The Detroit Red Wings are still in the rebuilding mode under general manger Steve Yzerman’s guidance, and there were many offseason additions and subtractions. Rather than concentrating on the departed players, the emphasis here will be on the additions to the team. Players who were previously on other teams will have an explanation next to their name when they are discussed. Instead of analyzing by line, players will be evaluated by position, starting with forwards, defensemen, and goaltenders.

Filip Zadina #11 (RW) Scored 6 goals along with 13 assists in 49 games last season. Zadina was drafted for his scoring ability, but even though his production was not what was expected, his defensive game vastly improved. The team is expecting more offense this time.

Robby Fabbri #14 (C) Scored 10 goals and had 10 assists in 30 games last season. Fabbri missed 26 games due to injury, but still had good numbers. The team is expecting a lot of offense this season.

Mitchell Stephens #22 (C) Signed as a depth Center Stephens played in Tampa during the 2021 season in 7 games.

Lucas Raymond #23 (RW) Raymond was the No. 4 overall pick in 2020, and made the team out of training camp. He was a prolific goal scorer in the minor leagues, and continued displaying his talents when arriving in training camp. He should be a great addition to the team.

Pius Sutter #24 (C) Played in Chicago during the 2021 season. Pius scored 14 goals along with 13 assists in 55 games. The Red Wings are counting on him to boost their offense this season.

Michael Rasmussen #27 (C) Rasmussen played in 40 games last season Scoring 3 goals and had 9 assists. The team is looking at him as a bottom six player who has filled out during the off season.

Carter Rowney #37 (C) Played on the Anaheim Ducks during the 2021 season in 19 games. Did not score any goals. A depth signing.

Givani Smith #48 (RW) Smith played in 16 games last season and scored one goal along with 3 assists. He made the team for his grit and toughness. Too many teams took advantage of the smaller Red Wing team in 2021.

Tyler Bertuzzi #59 (LW) Bertuzzi is the epitome of the gritty player. He goes into all of the high traffic areas by the net, and bangs pucks into it. He played in only 9 games last season due to a back injury which eventually led to surgery. Though only playing a few games he still managed to score 5 goals and 2 assists. Dylan Larkin who played on a line with Tyler missed his presence, as they worked well together. Looking for a rebound season.

Dylan Larkin #71 (C) Larkin the team Captain had a tough season. He scored only 9 goals along with 14 assists in 44 games. Then he missed the rest of the season with a neck injury. He definitely needs to rebound.

Adam Erne #73 (LW) Erne had a impressive year. He scored 11 goals and 9 assists in 45 games. He showed impressive hands and moves, and the team hopes for more after resigning him.

Sam Gagner #89 (C) Gagner scored 7 goals and had 8 assists in 42 games. He is a shifty veteran who also serves as a mentor for younger players.

Vladislav Namestnikov #92 (C) Namestnikov scored 8 goals along with 9 assists in 53 games. He proved to be a reliable fourth line center, grinding it out, and chipping in with an occasional goal.

This is the current lineup of forwards for opening night, and will be the unit most in flux as the season progresses.

Nick Leddy #2 (LD) Formally with the New York Islanders. Leddy scored 2 goals, but also had 29 assists in all 56 games last season. He is a good puck mover and mentor for younger defensemen.

Filip Hronek #17 (RD) Hronek was the team’s best defenseman last season, scoring 2 goals along with 24 assists while playing in all 56 games. It was a down year for him as he logged many minutes. The hope for him is his work load is reduced with the team’s improved defense.

Marc Staal #18 (LD) Staal was obtained in 2021 season scoring 3 goals along with 7 assists in 56 games. He is a dependable stay at home player who was resigned this season.

Gustav Lindstrom #28 (RD) Lindstrom played in 13 games last season. While not flashy he plays a safe conservative game. He will primarily be used as an extra defenseman.

Moritz Seider #53 (RD) Seider was the sixth pick in the 2019 NHL draft. He impressed while playing in the minor leagues and made this year’s team. He more than likely will be teamed with veteran Nick Leddy. The Red Wings are counting on him being a top tier defenseman.

Danny DeKeyser #65 (LD) DeKeyser scored 4 goals and had 8 assists in 47 games. He had major back surgery two years ago, and it took him awhile to find his legs. He seems to be recovered and should add a veteran presence this season.

Troy Stecher #70 (RD) Stecher scored 3 goals along with 8 assists in 44 games. He plays a solid defensive game while adding some offense, but his main strength is his positioning.

Jordon Oesterle #82 (LD) Oesterle previously played in Arizona, scoring one goal and had 10 assists in 43 games. He was signed for depth purposes.

The Defense Group is probably the best it has been in several years. They are for the most part NHL caliber. They should be a source of stability.

The goaltending last season was quite adequate, but could possibly be even better this upcoming season.

Alex Nedeljkovic #39 (G) 1.90 GAA, .932 SV% Nedeljkovic was acquired from Carolina. He only played in 23 games, but had a superb GAA and SV%. The Red Wings are counting on similar numbers this season.

Jakub Vrana #15 (LW) Vrana was obtained in a trade from Washington for Anthony Mantha. He played in 11 games scoring 8 goals along with 3 assists. He had surgery on his shoulder recently, and will be out at least 4 months. The team is hoping for his return in March 2022 after the Olympic break. Vrana’s injury really set the team back as he was being counted on to be one of the top scoring forwards.

With the addition of a few younger players and a stable defense corps, Fans are looking and hoping for improvement. The Red Wings are still not a deep team, and injuries can derail the teams progress (see Jakub Vrana). Being in the Atlantic Division with two-time Stanley Cup Champion Tampa Bay and other good teams, doesn’t bode well this season. It is expected the Red Wings will be better, but still finish among the bottom six teams.