Lowell, MA – Hockey East action kicked off for both the Boston University Terriers and the University of Massachusetts-Lowell River Hawks. With two conference points up for grabs this game had the intensity that the conference has been known for since it’s inception 36 years ago. Tonight’s game would not disappoint unless you bleed BU scarlet red. The Terriers have a 3-0 lead midway through the game, only to squander it away by the time the final buzzer sounded.

The opening period was a sloppy affair that resulted in the two teams trading penalties throughout. The Terriers’ Patrick Curry was called for Hooking at 6:29. The River Hawks could only muster one shot on the man advantage.

BU’s Patrick Harper opened the scoring at 8:36 when a bad change by the River Hawks had the senior in all alone on Tyler Wall.

UML got another crack at the power play when Ethan Phillips was sent off for Hooking at 9:34. Again BU was able to limit the River Hawks opportunities and actually created a 2-on-1 chance for Curry and Alex Brink that Wall turned aside.

BU has its first power play at 13:36 when Kenny Hausinger was whistled for Interference. BU had good pressure but couldn’t build on their lead. Just after killing off that penalty, UML’s Dominic Procopio was called for Slashing at 16:55. Phillips had a shot from the slot that Wall gloved. UML’s Matt Brown created a breakaway chance for himself but graduate transfer student Sam Tucker made the stop for BU. The River Hawks continued to press on the penalty kill.

At 19:14 BU’s Case McCarthy was sent to the penalty box for Cross-Checking. This penalty would carry over to the second period. Boston U. outshot UMass-Lowell 9-7 for the period while losing the face-off battle 9-6.

The second period, power play and all, started off horribly wrong for UMass-Lowell when an errant pass by Seth Barton in their defensive zone went directly to Harper along the side-wall. Harper walked in and beat Wall for the 2-0 lead just: 14 in. At 5:55 it went from bad to worse as Andre Lee was called for Interference. Defenseman David Farrance blasted a slap-shot from the blue line past Wall at 7:48. The power play goal put BU up 3-0. 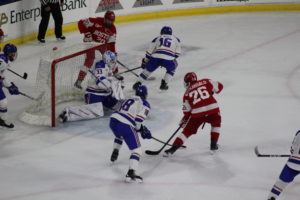 But for the second straight Friday, BU struggled to close out an opponent. A funny bounce off of a Tucker save fell to Conor Sodergren as he crashed the Terrier net. The puck bounced off of the Lowell junior or BU’s defenseman Alex Vlasic and past Tucker at 8:12. This gave the River Hawks, and the 4,592 fans in attendance, new life.

At 15:58 Kenny Hausinger took a pass from Lucas Condotta at the bottom of the left circle and fired a shot past Tucker cutting the Terrier lead to 3-2. BU had a solid chance just before the period wound down as BU’s Brink was all alone in front of Wall but couldn’t fire off a shot quick enough to beat the keeper. Once again BU outshot UML 16-11 but lost the face-off battle 16-12.

Just 1:20 into the third Barton redeemed his earlier mistake when he snapped a Condotta pass past Tucker’s glove catching the top corner. Tie game 3-3.

At 13:12 Sodergren was called for Boarding, BU used its time-out. It seemed to backfire as the River Hawk’s Brown had a solid shift killing the penalty in the Terrier zone. Sodergren, after he stepped out of the box, drew a Holding call on Patrick Curry at 15:26. This time it was BU and Harper who brought the short-handed pressure, as Harper raced in on Wall from the left side, fired off a shot that Wall saved, but the rebound kicked back to Harper, who snapped a shot on goal that Wall gloved from his belly.

The frantic pace of the final few minutes of regulation was compounded when Sodergren’s hustle kept the puck in the BU zone and led to a Trevor Zegras Roughing call at 17:56. UML was unable to cash in on the man advantage to end the game. BU continued to outshoot the River Hawks 34-26 and won the draws 14-12 in the third.

In the five minute overtime frame, BU’s Tucker made a beautiful save to deny Carl Berglund on a breakaway opportunity. Each team mustered only two shots apiece in overtime. 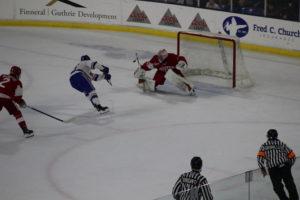 “Both sides played really well,” said Terriers second-year coach Albie O’Connell. “Both goaltenders played extremely well. I thought when we got the lead there we were going pretty good. They got a flukey goal and it gave them a little bit of life.”

O’Connell felt that on balance as a young team, on the road, against a good conference foe there were still positives to take away from this game. “Some guys on our team played really well, I thought some guys were passengers. There’s a lot of good lessons to take out of it. No one is satisfied with not getting two points.”

Lowell’s Norm Bazin was pleased to crawl back into this one and come away with something to show for it. “If there’s any tie that feels like a win, this is one of them.”

BU hosts the University of New Hampshire tomorrow night at 7:00 pm at Agganis Arena, while the River Hawks travel to Providence to take on the Providence College Friars at Schneider Arena, also at 7:00 pm.