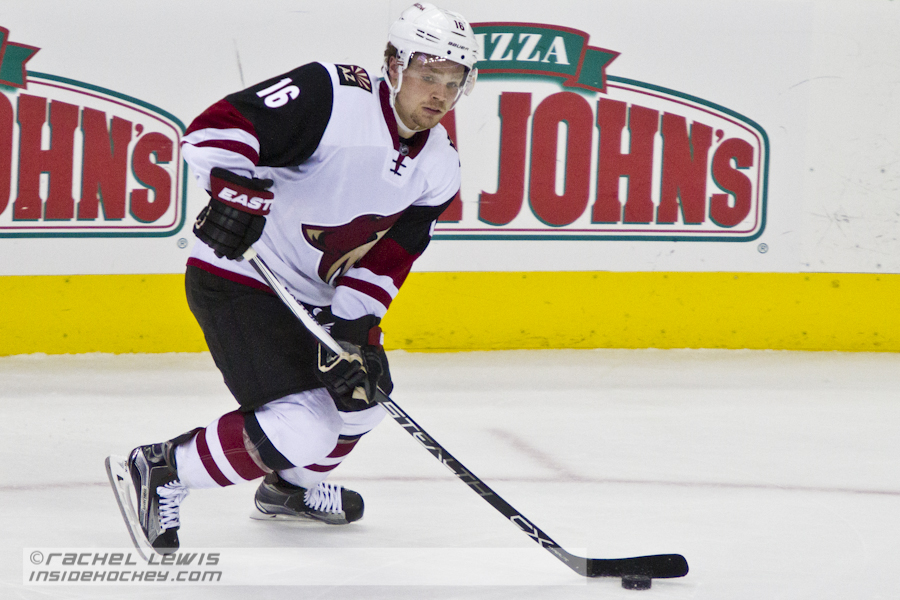 Recovering From A Long Stretch

If you have been following the Arizona Coyotes for years, strings of losses would mean falling behind in the standings. After winning three straight to close out the month of November, they found themselves on the wrong end of six of their last seven and only earning one point in the process, an overtime victory over Carolina on Saturday night. They were fighting to stay alive in the Pacific Division notching up tallies, hoping to make due of something and eventually keep up with the rest of the squads.

Instead, with their tailspin, everyone else joined them. The Canucks and Sharks, who are also the front runners of the Pacific Division, each have losing records in their last 10 games. This means with the season being close to half over, and with five teams separated by only three points (aside from the Kings who lead the division by 5 games), there very well could be a chance where one team pulls away and the other four fight for the final spot.

Arizona could very well be that team that can stand out from the rest, but they need to figure themselves out first.

In each of their five losses in their road trip they allowed nearly five goals a game, and on top of that five of their last seven games they have allowed five goals. A lot has to do with playing back on defense, which was a very big reason why the Coyotes were playing so well in the beginning. The fight has been there, but the effort in a full 60-minute game has slowly been lacking.

“I don’t like that we’re behind, but I like that we have the giddyup to try to get back in it,” head coach Dave Tippett said. “We have a lot of work to do.”

You can blame a lot on such a long stretch of games, playing seven games in the first month of December that included that long, winded road trip. The only big advantage now is focusing on all the wrong things that have been plaguing the team with a lot of time to regroup.

“I think the practice time is as valuable,” rookie Anthony Duclair said. “Tuesday we’re going to have a full special teams days. Our penalty kill has been pretty good although against Carolina it gave up a couple, but we’ve got to continue to pound away at this power play. We need it to generate more for us.”

While they have been scoring goals, the Coyotes haven’t been scoring them at the best possible time. Currently ranked 29th on the power play (14.7%), Arizona has been unfortunate on picking up scoring chances as they should.

“We’ve had runs where we’ve had good looks and just haven’t finished,” Tippett said. “Then there’s other times where we haven’t been as cohesive as we’d like. We’ll continue to tinker with it but in the end, when we are creating chances, it’s about capitalizing on those chances.”

Another setback, which could prove minor, is losing goalie Mike Smith to a lower body injury he suffered a few days ago. Backup Anders Lindback has taken over, and so far he has at the very least kept his team around. He was strong against Minnesota, but struggled as expected on a back-to-back against Carolina. Now with reports that Smith will be out at least eight weeks, it will be up to Lindback to help pick up some of the pieces.

This team has dealt with a lot of rough edges before. With yet another test in front of them, the goal now will be to bounce back and take control. And practice certainly does make perfect.