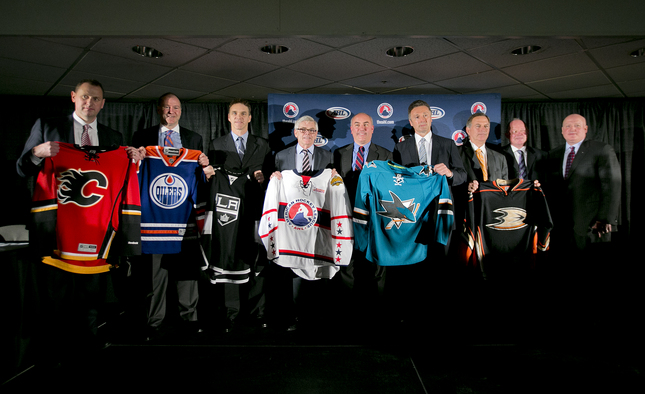 Realignment, Schedule Next Up After AHL’s Big Move

In an unprecedented but predicted move, the American Hockey League announced a radical change to its alignment Thursday, with five teams leaving the East and Midwest for the state of California. While many issues still need to be addressed, the league faces operational hurdles as is with teams from Texas to Newfoundland. The geography has now expanded to four time zones, and may create travel headaches that negate the benefits for teams basing their teams in California. The moves are as follows:

This is a great move for the league, but the headaches are only beginning. While full divisional alignments are yet to be determined, the AHL acknowledged via a press release the formation of a “Pacific Division.”

“Relocating five teams is a complex process, and we are very excited to have brought this initiative to a successful outcome,” said Andrews in the release. “The Western-based NHL clubs have been in dialogue with our league for almost three years, and today’s announcement launches a new era for the American Hockey League and for professional hockey in California.”

Part of the complex process is realignment. Although the move of these five teams was unanimously approved, don’t think the Board of Governors will lay down completely and cut off the pacific division. Teams like San Antonio and Texas, Iowa, and Charlotte, outliers in the current AHL, would not be happy flying to the East coast while avoiding the West coast. Meanwhile, St. John’s will have to play more games away from New England. While retaining their current “geographic” rival of Portland (for now), their next closest opponents will be in Providence and the state of Connecticut.

What could a divisional alignment look like next year? It might be a jumbled mess. We know the Pacific Division:

With four teams new to the west, this signifies a significant change, but the juggling does not end there. What about the Midwest?

Both San Antonio and Texas will fight tooth and nail to remain divisional rivals (and before you get too excited, with ownership by the San Antonio Spurs and Dallas Stars, respectively, neither team is moving.) The same can be said for Chicago, Rockford, and Milwaukee. Their triangle ensures no team is more than roughly 90 minutes from the other. This creates a huge rivalry and allows visiting teams to spend upwards of a week in the area.  However, one team is missing for the fold: The Iowa Wild. As the odd man out, the already geographically displaced Wild, may see their travel schedule toughen:

Sorry AHL fans in Toronto, you are stuck in the West again. It is an over 12 hour drive to Des Moines from Toronto. In fairness, it is a five hour drive to Iowa’s current closest opponent, but long road trips to the West and East might be the new way for the Wild. Meanwhile, Toronto and Hamilton are roughly in the same city and will not be parted, and Lake Erie and longtime rival Rochester were separated this past season with the addition of the Adirondack Flames.

With the West pieced together, what will the new East look like?

The toughest decision could be a short lived decision. Given the choice of splitting Bridgeport and Hartford or Hartford and Springfield, I had to pick the first. Bridgeport and Hartford had a strong rivalry, despite being in separate divisions, from 2003-04 to 2008-09. However, with a potential move by St. John’s and Arizona’s wish to have their team join the new Pacific Division soon, this division may look very different in 2016-17. The self-titled New York Division could be a welcome addition by some AHL diehards as well.

This division may be a keeper for the AHL. With Vancouver publically stating their approval with Utica, many believe the Canucks will not be looking to move their AHL club closer to home. However, if the AHL Pacific is successful, the Comets could always head to the left coast. Joining them would be former North division rival Rochester Americans, and their geographical rivals Syracuse Crunch and Albany Devils. While taking the Binghamton Senators away from their geographical rivals in the Wilkes-Barre/Scranton Penguins, the New York Division would welcome them with open arms, and re-establish some long time rivalries with Rochester and Syracuse.

While Charlotte to Bridgeport is a long 10 plus hour drive (without traffic), people often forget that Charlotte is a major airline hub. This has sustained them with flights out west, and could sustain them in the East. In fact, other than Bridgeport (no airport), Utica (no airport), Binghamton and St. John’s, there are non-stop flights to all other Eastern Conference cities. Additionally, Charlotte offers flights to most Western Conference cities, and the Los Angeles, San Diego, and San Francisco. Bridgeport is relatively close to the Pennsylvania markets, and there is no way a Pennsylvanian team would agree to be separated from their fellow Commonwealth teams.

Some people have speculated they go “NHL” style with divisions of seven or eight. Two years ago I detailed that this would be a sensible solution. This is no longer the case. If and when Arizona can get their AHL team to the Southwest and another team (looking your way, Vancouver!) can take the West Coast plunge, this may become an option. For now, however, the best option is to play it out as a six division and two conference system, keeping the AHL as it has been.

Scheduling has also been an issue. A few hours after the press conference in San Jose, Calgary Flames General Manager Brad Treliving met with the media in Stockton, his club’s new AHL home. At the press conference he said he expected the Pacific Division to play just 66-68 games, down from the current 76. While the official notes of the AHL’s Board of Governor’s meeting Sunday have not been released, I do not believe there has been a vote on this schedule, and I find it hard pressed to believe five teams will play fewer games than the other 25. Treliving is racking up the frequent flyer miles and is expected at an Adirondack Flames press conference Friday morning, where he may provide more details. It is expected he will announce a new ECHL franchise for the city.

There are still many questions, some of which do not have answers. The AHL is attempting what only a handful of leagues have done before in creating five new teams in a new geographical area seemingly overnight. Whether it ends up staying at five or ballooning to every NHL parent having an AHL team in their backyard, and whether it’s a 66, 68, 72, or 76 game schedule; the AHL has captivated the eyes of the hockey and sports community. I know I’ll be watching intently.