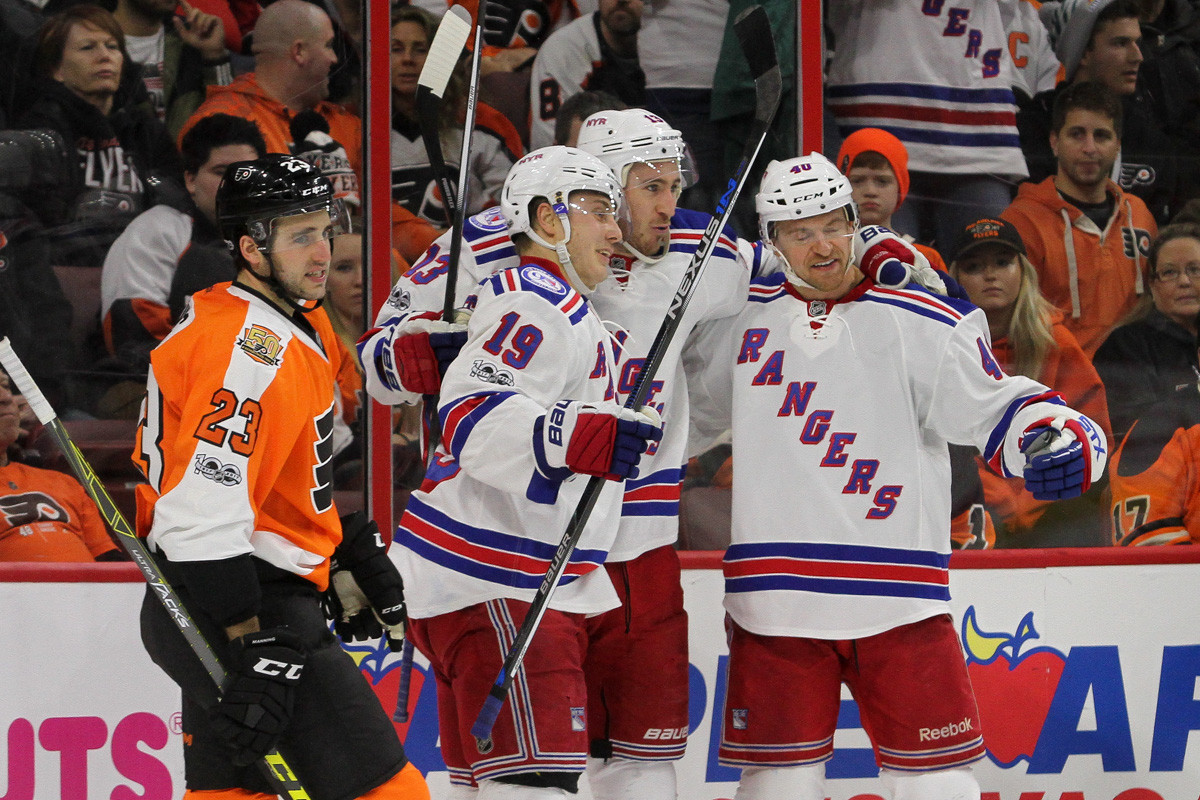 Members of the New York Rangers celebrate a goal

NEW YORK – What a difference a game makes as the New York Rangers defeated the Montreal Canadiens 2-1 in game four of the first round match-up to tie the series at two games a piece. The difference was a full sixty minute effort given by the Blueshirts who, instead of sitting back in period three, were able to continue to push and give the Habs little chance to get any offensive pressure. The win also guarantees another game at Madison Square Garden on Saturday for game six.

The Rangers certainly had jump out of the gate and got the home crowd into it. Yes, the Garden faithful were very loud tonight. Maybe it had something to do with numerous comments made from opposing player Max Pacioretty who felt game three wasn’t as loud as he remembers from when these two teams met in the Eastern Conference Finals back in 2014. The consistency of the fourth line for the Rangers proved to be part of the tremendous effort as Jesper Fast opened the scoring on a turnover and slipped it past Habs net minder Carey Price. It got a bit sloppy at the end of the first period but the Rangers maintained their composure.

Period two was by far the best period we’ve seen from the Rangers much like game one. The ice seemed tilted and the Rangers had their chances. The Blueshirts became the black-and-blueshirts as they continued to throw the body and put Canadiens players on the floor. Captain Ryan McDonagh most notably had a strong game on all ends including the physical play. A few other players stood out but no one more than Rick Nash who was awarded the Broadway hat. Rightfully so, Nash was all over the ice and contributed with the game winning goal, his second of the series.

Head coach Alain Vigneault decided to go with more speed in his line-up and inserted Pavel Buchnevich for Tanner Glass and Buchnevich also stood out and created some chances. The coach went on to say, “He seemed real good before the game, he seemed to be in a good space. I thought he went out on the ice and played a good game. He made some good plays with the puck. That line had some good zone time and they used their speed and their skill.”

As for the effort from his team, Vigneault went on to say, “We knew we had to respond as a group and that’s what this group did tonight. We’ve proved it in the past. We talked about managing the puck better. I thought we managed the puck better tonight. We played a better game. We were able to give ourselves an opportunity. It’s a two out of three (series). That’s what we wanted.” As for his top player (s) in which the coach had called out prior to the game he praised the effort from Nash, “It’s a team concept. Whether it be Rick or any player making an effort play out there, everybody notices that. We got quite a few effort plays tonight, whether it was on the forecheck creating turnovers or whether it be on the backcheck stopping their speed. That’s a real strong team on the other side there. To be able to compete and play against them, you have to make every shift count and that’s what we tried to do tonight.”

The Rangers were very satisfied on how they felt they responded after the lackluster effort in game three. McDonagh went on to talk about the team effort, “We talked about trying to take away their time and space in the neutral zone.  I liked that we had good gap up in their face trying to not allow them to carry the puck in the zone as much.  It helped us not get stuck in the zone that much and be fresh to make plays out of our own end and spend some good time there.”

Henrik Lundqvist was terrific yet again but that is nothing new talked about if he sensed urgency from team knowing they needed to win this game, “We had some good meetings, a good practice yesterday.  It’s one thing to have all these meetings and talk about it and it’s another to actually go out and do it. I felt like we had good energy in the room and we believed we could do this.  We felt like we had to play our best here to get this win and go back to Montreal with a tied series.  It’s exciting. They’re a good team and they came close again.  But I am really happy and proud of the way the guys came together tonight and played their best.”

Now the series shifts back to Montreal for a pivotal game five where the Rangers are looking to build off the win and match the effort and energy and put the Habs on the brink. As for what could definitely be improved is the power-play in which they failed to score on two attempts.

The Rangers have won six of the last eight playoff games they have played when trailing in a series, dating back to Game 5 of the Second Round against Washington in 2015.

New York has won 10 of its last 14 playoff games against Montreal, dating back to Game 3 of the Eastern Conference Quarterfinals in 1996.

Rick Nash registered the game-winning goal and recorded two shots on goal. Nash has tallied a goal/point in two of the last three games, as well as in seven of his last 12 games (dating back to the regular season). In addition, Nash has registered 13 points (seven goals, six assists) in his last 13 playoff games. He is tied for the team lead in goals (two) and points (two) in the playoffs this year.