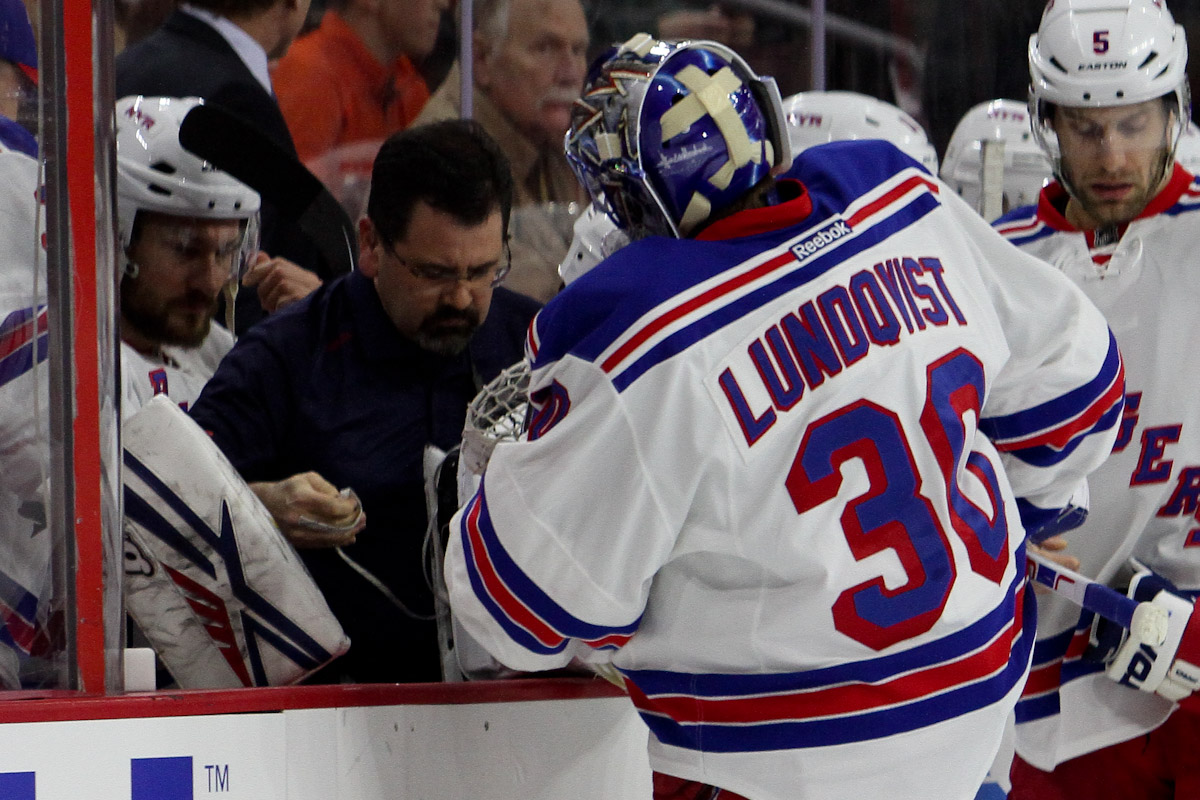 After falling 5-2 to Pittsburgh on Wednesday to open the playoffs, the Rangers learned they could be faced with a daunting reality: win a playoff round without Henrik Lundqvist.

Lundqvist sustained an eye injury at the end of the first period on Wednesday when Marc Staal’s stick blade reached through the netminder’s mask, and reaching his eye. Lundqvist received medical attention on the ice and even returned to the bench with 40 seconds remaining in the first period to be administered eye drops. He proceeded to return in net, where he surrendered the game’s first tally at 19:42 from Patric Hornqvist, part of a hat trick performance.

After the Penguins started off the evening with surprise starter Jeff Zatkoff for game one, the Rangers added to the narrative when Antti Raanta started the second period for New York. Lundqvist would not return to the Rangers’ bench for the rest of the night.

Aside from his departure after the game’s opening period, the Rangers effectively shot themselves in the foot. They took away from their momentum with foolish penalties, like Kreider’s interference nine seconds into the second period. The defense struggled without captain Ryan McDonagh (see Crosby goal), and failed they failed to generate offense despite firing 37 shots on goal in the game.

The Penguins meanwhile blocked 22 Rangers’ shots and even in a game where they were outplayed for large majorities of the game, their star players managed to come through–helping earn their first-time playoff starter his first career playoff victory.

Now, with two days off, the Rangers will have to regroup and prepare for game two on Saturday–a game that could once again find Raanta in goal for New York.

The club recalled goalie, Magnus Hellberg on Thursday. Lundqvist meanwhile will see a specialist before the team determines his status for game two–and possibly the rest of the playoffs.

If he’s forced to miss any significant time, the burden will fall onto a Rangers’ group who needs to get a more sustained showing from their lineup. Rick Nash will finally need to rise above the notion of irrelevancy in the playoffs. Eric Staal, 43 points in 44 playoff games, will also have to show he was worth another trade deadline of mortgaging the future. They’ll also need more out of their top defensive unit of Dan Girardi and Marc Staal. The two have hardly hidden the reality of what years of shot-blocking and punishing defense does on the body, but they have to be better to avoid this series unraveling before their eyes. The two were a combined -4 on Wednesday and were forced to play 5:56 of ice time on the penalty kill.

On the Pittsburgh side, there’s still no indication as to whether the Pens’ will return to Zatkoff or perhaps Marc-Andre Fleury, who was expected to start Wednesday, could be ready to go. Fleury has been dealing with a concussion since April 2–his second concussion this season.

All eyes will be on the TBA-starters ahead of Saturday.