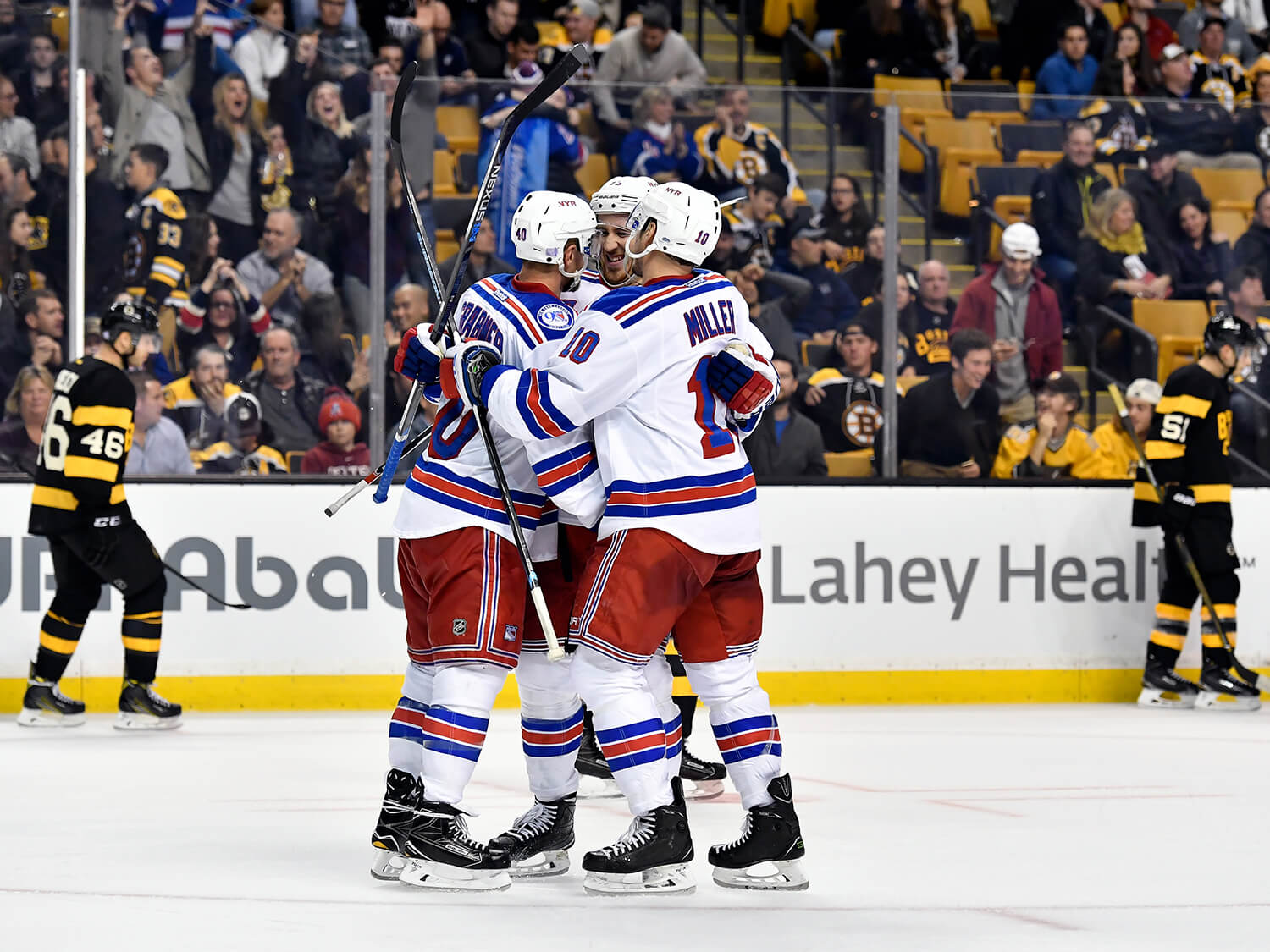 NEW YORK – The New York Rangers extended their winning streak to five games in a row as they defeated the Winnipeg Jets 5-2 Sunday night at Madison Square Garden. This was the fifth game in a row in which they have scored five goals and have done that in eight games out of the thirteen played thus far this season. The Rangers continue their winning ways with yet another strong second period as they now have outscored opponents 25-7 in the middle period this season.

Once again, it was another night of five different goal scorers for the Rangers. They continue to get contributions from everyone each night. The Rangers, who have now played five games in eight days will get a much needed and deserved off day tomorrow before their schedule of every other day resumes Tuesday.

The Rangers have continued getting their contributions up and down the line up as they have improved to 10-3-0 on the young season. They have also taken advantage of this early home schedule now improving to 8-1-0 on home ice. It wasn’t the better games we’ve seen the Rangers play but were able to get their game back in the second half of period two. In their last 84 back-to-back sets (since the start of the 2010-11 season), the Rangers have posted a 55-23-6 record in the second game of the set.

Lundqvist knowing it wasn’t a top performance of the Rangers went on to say, “Definitely not an easy game. They are a skilled team but we found a way after they tied it. We had a couple of shifts where we turned it up a little bit, scored a couple of really important goals. If you look at the weekend, two big wins. I don’t think we are super pleased with everything in our game but we are finding ways to win”.

As far as finding ways to win, the King went on to say, “That is hockey, you never know what will happen. There are lots of skilled players out there and the game can change in a minute. You never know, that is why you need to pay attention to the details and one shift can turn it around for you in a good way or in a bad way. A couple of penalties can turn a game around. We aren’t perfect but we are doing a lot of good things at key times in the game. Yesterday and today we are finding a way which is a great sign.”

What is amazing is that this performance at least from a players perspective is the Rangers believe they haven’t been good at least in last nights game against Boston and tonight against the Jets. Imagine that, the Rangers are not happy with how they have played and yet they are 10-3-0 in the season. It goes to show this team is poised for more and hungry for more.

When asked about tonights game, head coach Alain Vigneault was giddy knowing it wasn’t pretty but acknowledging a win is a win by saying, “In the second period we had four chances, and we scored on all four of them.  There’s no doubt that we capitalized on our opportunities.  I would say tonight is a good night to use, ‘never critique a win,’ just take the win.  It was our fifth game in eight nights, fourth game in six nights; it was also their third [game] in four [nights] so these are really tough on players: tough physically, tough mentally.  You’ve got to grind it out.  In the third period, we’re just trying to defend.  We’re packing it in front of our net, we’re blocking shots, and we’re trying to get the two points, and that’s what we did.”

Captain Ryan McDonagh gave high praise to his goalie who he felt bailed the Rangers out in a few tough spots, “We knew we were playing sloppy. It was a back-to-back situation. Those are big tests for our team and thankfully Henrik [Lundqvist] bailed us out there early and we were able to get through that point of the game where we weren’t firing on all cylinders and playing the way we needed to be, competing on pucks and competing against those guys”.

The key to the Rangers success has been the fact they are able to roll four lines and have the balance needed. Brandon Pirri, part of that fourth line when asked about having four lines that can contribute went on to say, “It’s pretty impressive. Everyone is contributing and that’s what’s important. It’s a tough matchup for other teams when the next line coming over the boards is just as capable as the one before that.”

The Rangers will have the day off on Monday before being back on MSG ice Tuesday night against the Vancouver Canucks. Then another test awaits as they will then head to Western Canada for their first real road trip of the season.

Pavel Buchnevich registered a goal and posted a plus-one rating. He has notched a goal/point in each of the last two games, and he has recorded a point in four of his first eight career NHL games (two goals, two assists).