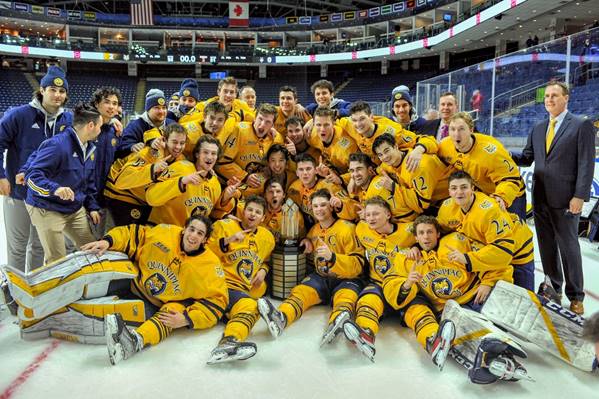 Bridgeport, CT- Quinnipiac entered the 2021-22 season with high expectations. By every measure, Rand Pecknold’s unit has exceeded those expectations. On Sunday night, the Bobcats accomplished one of the program’s goals by beating UConn to win the second ever Connecticut Ice Tournament.

The first two periods went by without a goal going on the board. Goaltenders Yaniv Perets and Darion Hanson traded turns making excellent saves and each team had two power play chances through the first two stanzas. Both penalty kills stood up to the pressure.

Quinnipiac landed the winning blow 7:11 into the final frame. Dartmouth transfer Brendan Less set up a two-on-two rush for Ty Smilanic and Desi Burgart. Florida Panthers draft prospect Smilanic shot and Senior Burgart cleaned up the puck for his fifth goal of the season and the game-winner.

UConn cranked up the offense and outshot Quinnipiac 13-9 in the final frame, but Freshman Yaniv Perets stopped all 13 shots and Ethan de Jong potted an empty netter for his ninth goal of the season. Quinnipiac secured a 2-0 final, their first trophy of the season and their first CT Ice Tournament crown.

“I’m proud of my guys,” commented UConn Head Coach Mike Cavanaugh. “It’s a game where we didn’t get the result we wanted, but we’re not gonna let this game define our season.”

The Huskies returns to conference play next weekend with a home game on Friday night against Providence College and on Saturday night at the University of New Hampshire. Puck drops at 7:05 at the XL Center against the Friars and at 7:30 at the Whittemore Center against the Wildcats.

Quinnipiac improves to 21-2-3. “I thought we would be good,” commented Head Coach Rand Pecknold. “…but I didn’t think we would be this good.”

The Bobcats recorded their 12th shutout as a team this season, tying the NCAA DI Men’s Hockey record set by the 2000 edition of the Niagara Purple Eagles with a full month and change of the regular season still to play. Dollard-des-Ormeaux, Quebec,native Perets notched 29 saves for the game; a career high and his ninth shutout of the season, only three back of Niagara goalie Greg Gardner for the all-time single season record.

Quinnipiac returns to ECAC play next weekend when Union College and the Rensselaer Polytechnic Institute visit Hamden. Puck drops at 7 against the Dutchmen on Friday night and against the Engineers on Saturday night.