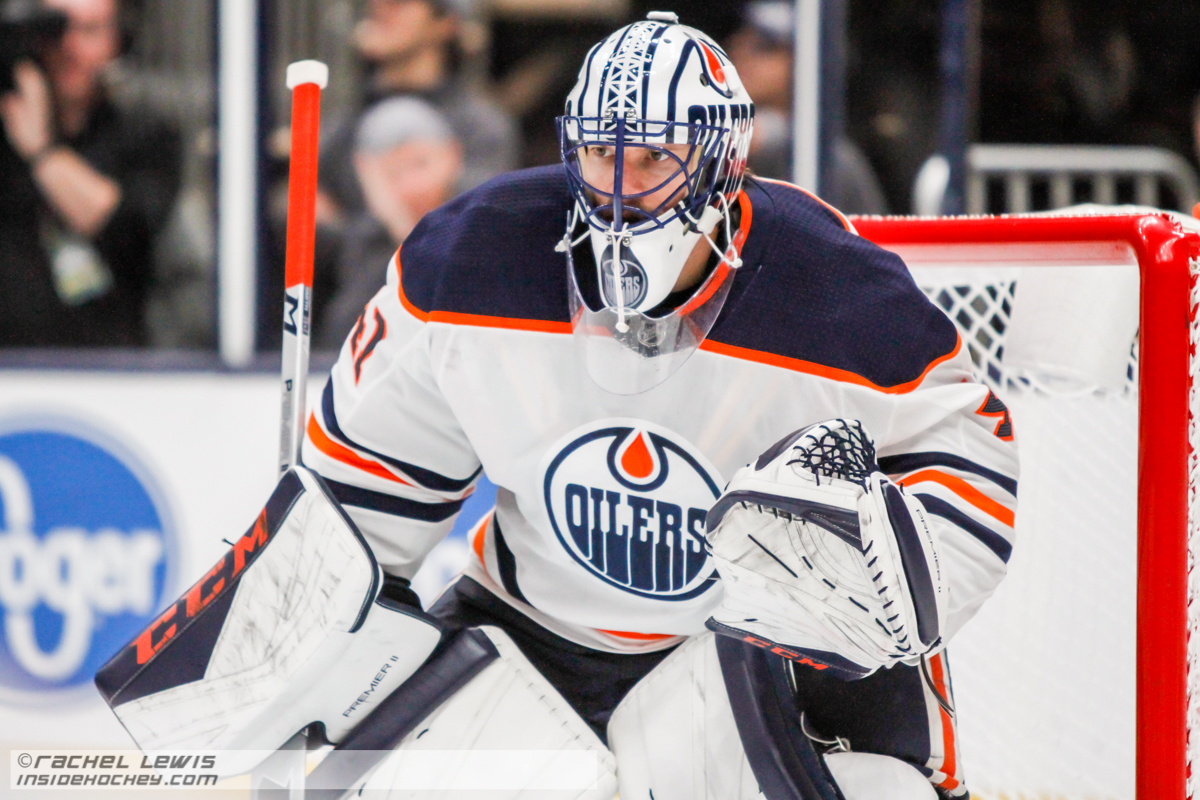 The  first night of the NHL playoffs a la 2022 was marked with high-scoring knockout games. 5-0, 5-1, 4-0. If you could have picked which  one would the the mighty Oilers versus  the much-injured Kings, you would have taken the first of those. Edmonton’s favor. Well, it didn’t turn out that way, and that’s to the good. The teams played a 4-3 game. Not a boring old somebody’s-got-to-win 4-3. A seesaw goalie exhibition, power play filled, thriller.

No mistake—Jonathan Quick won this first game of the Kings’ playoff series versus  the Oilers. Sure, the team had to score four goals. But  every time they got one (after an initial two-goal lead), the Oilers pressed. Then got the  game even. Then pressed again and should have gone ahead. But, well, Quick.

Not that the guy on the other end, Mike Smith, wasn’t excellent, too, though a  gaffe in period three ultimately led to the fourth LA goal in a 4-3 road victory. It was a game that the eye test  might have said the Oilers should have won. They were explosive and threatening in many  sections of the game. But  then again, so were the  Kings, and the  minute you took your  eye  off the screen, someone scored. Or didn’t, but  even that was thrilling for the way the  saves were made.

Goaltenders’ duel? Of sorts. Quick was the more visible, the more spectacular, and ultimately the more steady keeper. Here are some highlights, plucked in order of appearance. They are  only a sampling:

Alex Edler rushed the puck up ice and nearly scored  nine seconds into the first period. The Kings built on this to gain an early lead in shots, 7-0. Then Ryan McLeod somehow burst in on Quick, took a backhand, and saw it saved.

The Moore-Danault-Iafallo line was dominant early. Durzi rushed the puck to the net from  his position on defense and Moore stayed back to cover. Then Moore rushed the puck and got it in deep. It was a trick that the  Oilers used a lot too, forcing the Kings to go backwards.

Edler took a shot-pass and Kempe tipped it. Smith made the save. Then  Kopitar put one to Kempe for a one-timer. Save.

In the first period, the Kings got goals from Moore and Iafallo, and were cruising to a 2-0 lead to end the period. But McDavid. What? He scored on a rush all the way from the top of the dots in his end. He beat four Kings players, including getting two of them to tie each other up.

It looked like a goal that said, “No more” to the opponents. It didn’t turn out that way.

The second period opened with two Draisaitl chances on the power play, the first saved with Quick’s chest, the  second with a dive across the crease.

The Oilers tied the game 2-2 on a Duncan Keith vision play. He spotted Yamamoto down near the crease and sent a shot-pass to him for a redirect. But the Kings got it back about a minute later. Kempe passed the  puck over to Brendan Lemieux on a rush. He whipped a shot low under Smith. 3-2.

The Oilers tied it once more on  the power play after one defender, Danault, broke his stick. The  puck went toward the right corner, two Kings chasing it. It went to Draisaitl on the  other side of the ice, and he had plenty of time to pick the  top  far corner with a perfect shot. This was almost dead-on halfway through the second period.

The game would remain that way until about  five minutes were left, but  not without more thrilling moments. Eight seconds into the  third period, McDavid burst in on goal. To stop him, Quick had to do what can only be  called a backwards splits dive. McDavid couldn’t get the  puck past his right foot and into the net.

Shortly later, the Oilers were down a player on a penalty. Yamamoto had a shorthanded chance. Quick did a splits save. McDavid put  a one-timer over to Yamamoto, but Quick moved out and made a high glove save.

Then the gaffe by Smith. He tried to throw a puck up  the  middle, and it went right to Iafallo. He shot to the open net, but Smith had scrambled back and flung himself right to left to make a save on what was essentially an  empty-net goal. Play continued in that zone, and Durzi eventually threw a puck on net that grazed off of Danault and in. 4-3.

The Oilers, as one does, pressed the matter after this. Nurse took a shot coming down the slot. Quick made yet  another great save. More chances and plays eventuated with the goalie  pulled for Edmonton. Quick was steady on every one, often out to challenge, never staying back. So he got the win, in this his 86th consecutive playoff start for the team.

Can he, can they, do it  again? Coach  McLellan said so afterwards, albeit not in so many words: “Made some mistakes. Went to the penalty box way too much for anybody’s liking, especially against that  type of power play, but for the most part we were able to check and we got excellent goaltending, as we expected.”

“We’re opportunistic. That’s our identity, and that’s how we played, a carbon copy  of how we’ve  done it [over the past several months].”

McLellan indicated that the one thing that needs to change in the Kings’ game is that they  must take fewer penalties in the next game. They  took five penalties and were shorthanded four times, twice scored upon.

McLellan was asked why Lemieux had not played again after his goal, and McLellan dismissed it as nothing he had done. The team simply was down to three lines given that McDavid and Draisaitl were playing every  second shift. This was facilitated in part due to the use of 11 forwards and seven defense by the Oilers.

The series resumes in Edmonton on Wednesday.