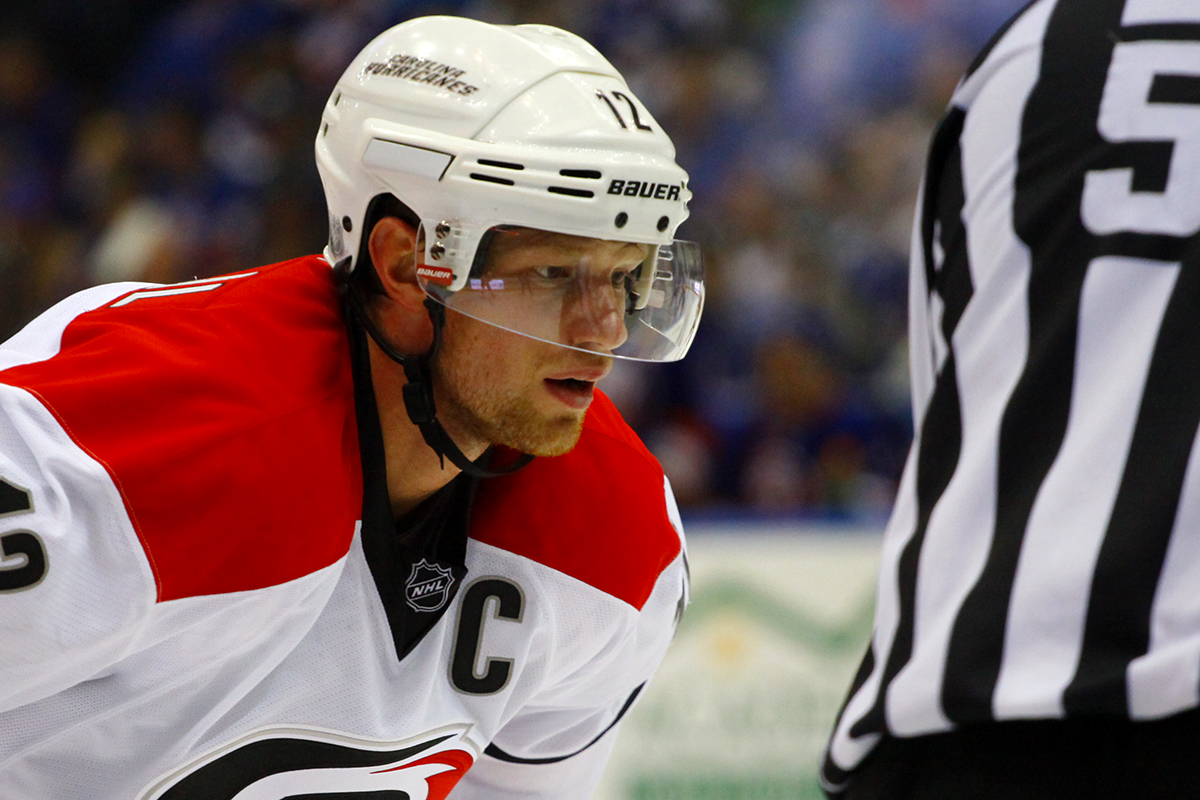 Carolina came into LA Thursday night eighth in the East’s wildcard race. That means they were way out of the playoffs. And they didn’t have the excuse of having games in hand. They just haven’t won much this year yet, and most people who comment on their progress are quick to condemn their chances to do well. But the old cliché by a club which beats a weaker team is, “That’s an NHL team over there, and we can’t take them lightly.”

The Kings didn’t. Sometimes, they start slowly when the other side is undermanned, assuming that they can pick up their game when they need to. Instead, they took it right to Cam Ward, firing away for 12 shots in period one. Problem is, they were hindered by their own sloppy stickwork, taking six minutes in penalty time to the Hurricanes’ four, and they exited the period with a 1-1 tie on a power play goal that Ward had no chance on and a very soft goal that Jonathan Quick had every chance for.

It’s a rare occurrence that Quick makes a mistake, especially since he stopped wandering out of the net and fudging it with the puck as he used to do. Now, he mostly just stays where he belongs and lets his defense handle the loose pucks. On the goal, Skinner’s fifth, the puck took an odd bounce off the boards near center and was picked up by Skinner, who skated into the LA zone and fired a wrister long side. Why? Because he saw that the goalie was either cheating to his left or mistakenly positioned a little too far that way. The period ended 1-1.

Period two ended 3-2 Kings, but they were doing a couple of things right, much more right than normal.

First, they were shooting the puck. They opened up the gap on Carolina in frame two, firing away 18 times to end with 30 shots. The ‘Canes, by contrast, had just 11 shots. Actually, 11’s not a bad number, since multiplied by three periods, it would yield over 30. In fact they ended the night with 27. The Kings had 39. And the score was that same 3-2 number.

Second, the Kings were doing something they often don’t, and that was getting the puck to the net a certain way. How? The soft toss. Repeatedly, they lobbed the puck toward the crease, because they had guys there. On many shifts, this was Stoll. Other times, it was Williams doing the deed of standing in the tough ice. This is how they scored their second goal, which ended up going in off the stick of Trevor Lewis after it came softly to the crease and was first touched by his skate. There was a review, moderately brief, before the goal was confirmed.

After the game, IH asked Coach Sutter about the strategy. “That first period we were really good. We just sat back a little bit, knowing they were going to come. I thought we controlled the game in the offensive zone. We tried to get to the net knowing that Ward’s been hot. We needed some traffic, some screens. I thought our defense did a really good job of putting pucks there, getting a lot of shots from up top. We were trying to beat the defensemen to the net, out of the corner. The style of game they play, especially the two defensemen who are so mobile, Sekera and Faulk, we knew we were going to have our hands full.”

The Hurricanes noticed the strategy too. Both Eric Staal and Brett Bellemore said so. First the Captain: “They did a good job the first two periods . . . using their size and strength down low, taking pucks hard to the net. They were rewarded with a few goals that way. Close game, but just not quite enough. They were real aggressive, quick. You’ve got to credit them. They were fast. Tonight they were better than when we played them in our rink.” That was November 2nd, and Carolina won that one 3-2.

Then Bellemore: “I think our game plan was to get behind their D. But they come hard, obviously. They’re hitting. They’re pinning. They’re using their bodies. Obviously, they’re a big team, and it’s tough to contain. But as the game went on, we used our speed, and that helped out a little bit.”

Sutter, did, however, disclaim the notion of size being a special strategy of the LA team. “That’s a bit of old news now,” he said. “I think our strategy is no different than anybody else if you look at it. You’re within a couple of pounds.” Of Carolina, he said, “They’re not a big group, their forward group, they’re a fast, skilled group. They’re a different type of team than ours.”

The ‘Canes almost tied the game at the end, with Elias Lindholm getting the puck in the slot, right side, and firing away. Quick got it with his glove, a miracle save, or nearly. Staal said that he hadn’t seen it, tied up in the corner with Drew Doughty, but he analyzed the play anyway: “Sometimes the goaltender has the better idea, and on that one he did.”

Bellemore said, “Obviously, Quick’s a great goalie. He’s a champ, right? You’ve gotta go up on him, and that puck stayed down there.”

As for the Kings’ season so far, Sutter said, “We’re just about at the quarter pole. Just about everybody is at that twenty-game mark now, and you take the first ten, last ten . . . and we wanted to finish our twentieth game with a win.”