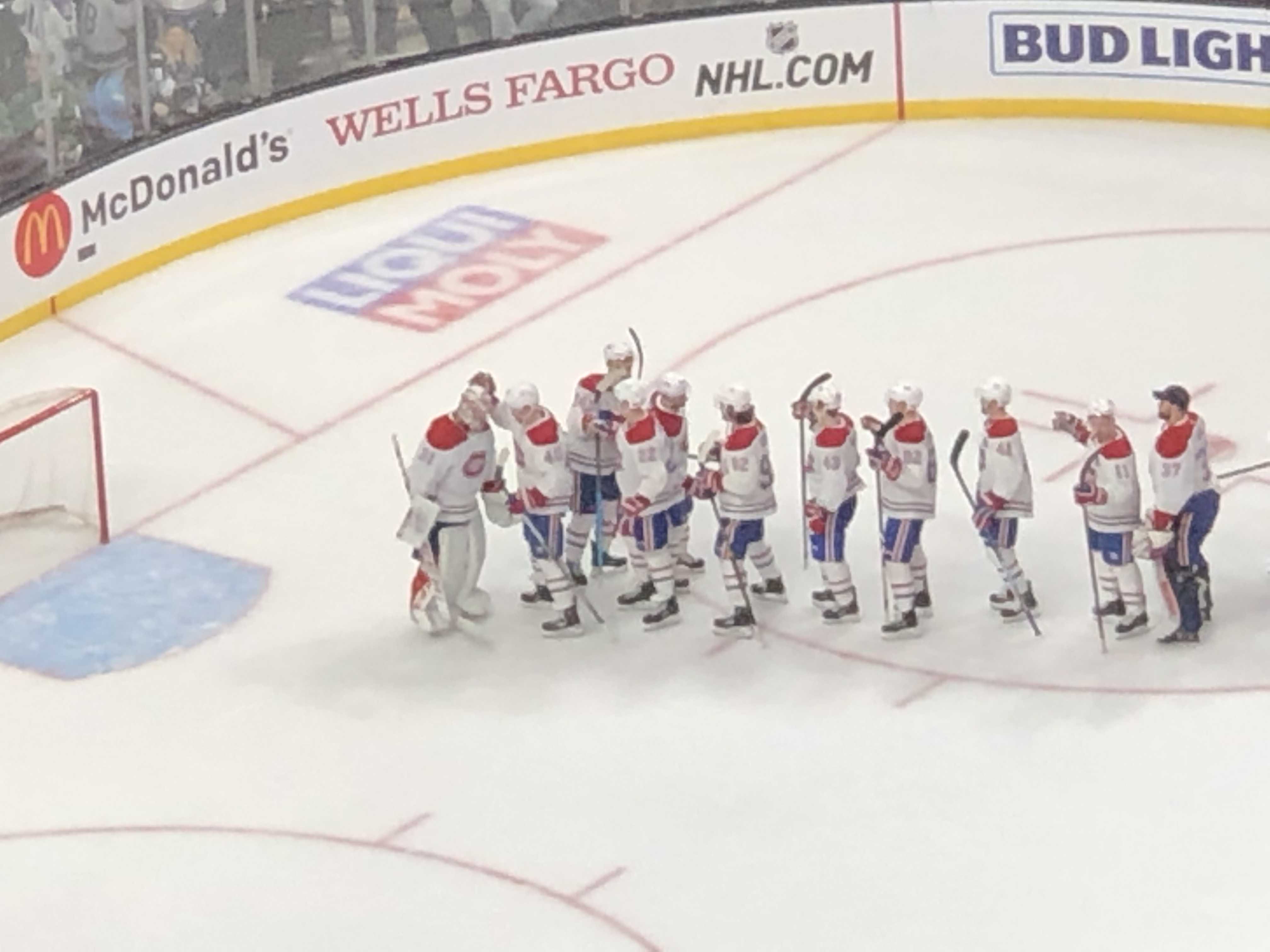 Let’s not get weepy, but I’m gonna say this: had I been able to look ahead from my Montreal childhood and see myself in an NHL press box covering the game on a nightly basis, I would have thought it a dream. If only .  .  . . I worshipped the Canadiens, and I got to go to two games during my growing up years. I’ve now been to more than 600.

Here I am, in Los Angeles. And here were the Montreal Canadiens. Serge Savard on defense, AKA Shea Weber. Larry Robinson too, though he had Jeff Petry’s name on his sweater. Then there was Guy Lafleur, who now goes by the name Brendan Gallagher, and Pete Mahovlich, disguised as Jonathan Drouin.

They might not be those Montreal Canadiens, and they didn’t exactly play like them, but it was thrilling to see that white “away” uniform, looking like the one I have still from my teenager days. Before that, I had the red one. Still got that one, too. Would maybe fit an eight-year-old.

The team on this day woke up in the second wildcard spot in the East. By game time, they were outside looking in, 77 points tied with Columbus but out on tiebreakers. This due to Columbus taking a win against the Devils. No big feat, that, as New Jersey is third from last in the East. Montreal had to do the same, and they might have thought themselves to have had things easier because they were playing the final Western team.

But LA had just beaten Chicago while the Habs lost to the Penguins in their last game. Montreal was, in addition, 4-6 in its last ten. They needed a push.

They had a great first period and left it ahead 1-0. The goal was just one of the several tricky shots from the blueline that Jonathan Quick faced over the frame. It was bang off the faceoff, from left defense to right, Weber to Mete, and tipped by Gallagher. The puck went in the top of the net. 3:11 had passed since the start of the game.

Quick was good on several other tries. He dove out to make a save early, didn’t get a shot, and then was ready again with his spread-eagle and trapper glove when it was put back in. He later made an aggressive blocker save off a floating wrister with Phillip Danault standing tight to him.

The other nice one was off a Petry wrister and Weal deflection where Quick had to slide over to make the save.

Meanwhile, Drew Doughty was all over the ice. He didn’t seem to come off of it, in fact. One play, he was down behind the Montreal net with one hand on his stick trying to corral the puck and then in his own end grabbing up a loose rebound behind the cage. It was actually quite surprising to see his ice time number at the end of 20 minutes: about seven and a half.

Period two saw the Kings come out more alive. Kovalchuk got a super-quick shot away after LA won a faceoff. Jeff Carter broke into the zone and across the slot with Shea Weber on him. He had his stick partially hindered, but still got off a shot, albeit weak.

Meanwhile, the lines started shifting. Kopitar, who had stared with Brown and Toffoli, was used alongside Clifford and Lewis. He was next put with Leipsic and Kovalchuk. Kopitar was dangerous at least once, cruising across the slot and putting a puck back against the grain, for either a shot, a deflection, or a pass.

And then the Kings played like they sometimes play. Sean Walker reversed the puck behind the net, Phaneuf eventually picked it up, and he tried to skate it out diagonally through the slot. Joel Armia took a whack at it, the puck was coughed up, and Jordan Weal picked it up, quickly looked at the net, shot long side, and the wrister went in. The shots were 11-10 for visitors.

The goal would later count as the winner, as the Kings got one midway through the third period. Before that, Shea Weber made it 3-0 41 seconds into P3. Then Matt Luff scored his eighth of the year. Doughty fed him a soft, short pass coming into the Montreal zone. Luff cruised down the slot, waited, and fired a wrist shot long side, fooling Price. They’d get no more.

Carey Price’s win, number 314, put him in tie with Jacques Plante for the most in franchise history. After the game, he put that in perspective: “I knew who he was, yeah,” he said about his knowledge of Plante at the time Price came to Montreal. “It’s a pretty cool accomplishment, obviously very [inaudible] of how long it’s been throughout my career and all the things that led up to it. I’m very proud of it.” He later added, “I’m very proud of the accomplishment so far, but I don’t feel we’re anywhere near the end. I want to continue to have success in this league and continue to push the envelope.”

He’s got to win a Stanley Cup to validate this, in the minds of Montrealers, and hockey people everywhere. Where he’ll do that is another question. Maybe in Quebec. Maybe elsewhere. Price on this night had solid stops, but nothing spectacular. Then again, the Kings didn’t press him or force him to be acrobatic. They did beat the Habs in shots 27-24. There were only a couple of hints of a threat, aside from Luff’s goal.

And that brings us back to the newcomer to the team. Weal said of his night, “We played a full sixty-minute game tonight. A goal in every period, but my goal was just a plus on top of that.” He is on his third team of the year, having started with Philly and then moved to Arizona. His NHL debut season was ten games with the Kings in 2015-16. Prior to that, he had two plus-100 point years and one with 96 points in Regina. In 154 NHL games, he has 21 goals and 24 assists.

He said he was comfortable with the team, and his linemates, who were Drouin and Armia, and that he needed to “stay patient and be in the right positions.” He was acquired at the trade deadline and then scratched for four straight games. He said the practice he’s had had helped to acclimatize him to the Montreal style of game.

Captain Shea Weber said of Weal, “We were happy for him [scoring], obviously, new guy in here, and against his old team too, it was big. It not only made it 2-0 and gave us a little more breathing room, but big for a guy that just got here and scoring against his old team.”

Coach Julien also talked about Weal. “He is an experienced young player, and I thought he competed hard, and right hand centerman, won some draws for us. I like that he handled himself well and didn’t seem out of place. Scored a big goal, the winner, so good start for him, and good start for us.”

Montreal now moves on to play San Jose and Anaheim back-to-back Thursday and Friday, with the short-hop flight wedged in between. The Kings await St. Louis before heading out for two games.

Coach Julien said Price deserved his record. He’s been through some tough times, and he has persevered.

Another record in the Montreal press materials, for scoring by forwards who get three or more points three or more games in a row has names as old as Joe Malone and Newsy Lalonde. Now that’s some real hockey.