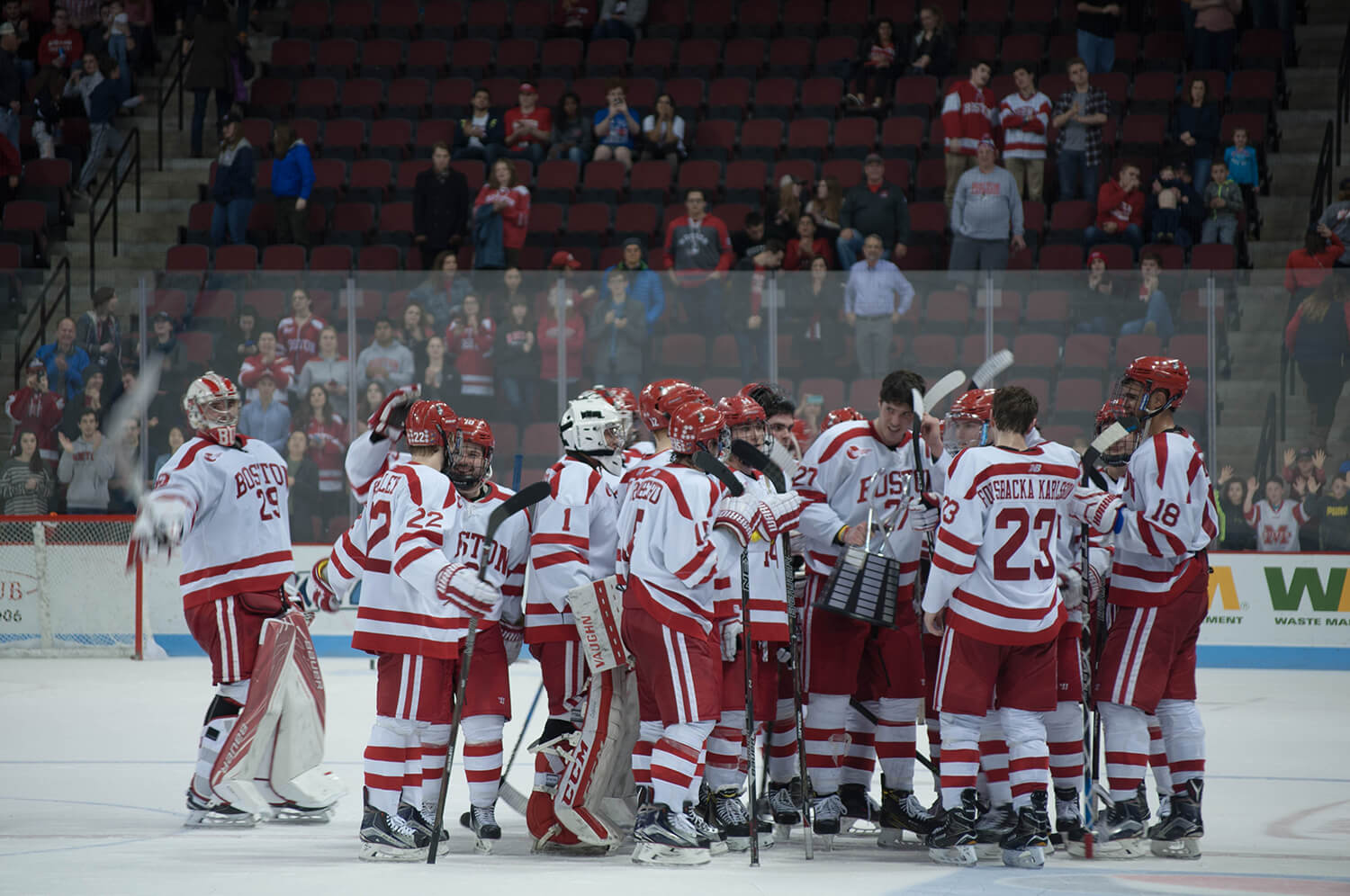 On March 17th and 18th, the Hockey East will determine its champion at the TD Garden. Before the 2017 championship banner flies on 100 Causeway Street in Boston, the Quarterfinal round needs to be played. Eight teams will play this weekend across the country to determine the semi-finalists for the tournament. They vary in postseason experience, talent, standing within the conference and prestige. They all have championship aspirations and the means to win. Let’s take a look at the four matchups this weekend.

On paper, this is the easiest matchup to pick. UMass Lowell is the top seed in the conference, has the top scoring offense in the league, and they’ve won seven consecutive games. That includes a sweep of Boston College, a home win against Boston University, and a dominating 8-2 victory against the same Wildcats that they will host this weekend. New Hampshire came into the playoffs on a bad skid. In their final twelve games, the Wildcats went 1-9-2. The win was a well earned 4-2 margin in Burlington, VT against the 14th ranked Vermont Catamounts. The two ties came against BU and Notre Dame.

On paper, it should be a clean sweep by the Riverhawks. However, New Hampshire has already pulled an upset this postseason with big scoring performances at Lawler Rink against Merrimack, winning their first-round series in three games. After losing 4-0 to open the series, New Hampshire’s top scoring line got after the Warriors and won 4-0 and 5-2 to win the series and move on to the next round. New Hampshire’s offense is potent. Tyler Kelleher is a candidate for the Hobey Baker award, totaling 23 goals, 39 assists, and 61 total points. He,

Michael McNicholas and Jason Salvaggio form a scoring line that can torch anyone. However, Lowell can answer the Wildcats top line with a deep offense, featuring 12 skaters with double-digit point getters. They also have a dependable goalie in Tyler Wall. He has the highest winning percentage in the conference and is third in save percentage. Danny Tirone is not a bad goaltender, but he is streaky. If he is on, as he was in the final two games against Merrimack, the Wildcats are a formidable unit. If he is not, then his team will struggle.

New Hampshire will cause problems for Lowell’s defense, but I don’t see the Wildcats pulling the upset on the RiverHawks at the Tsongas Center. They won’t have the defensive length to contain the most balanced offense in Hockey East. Lowell wins in two entertaining and difficult games.

These Boston rivals do not like each other. They have combined for entertaining matchups in recent years, including overtime in both the 2015 and 2016 Beanpot. They didn’t meet in this year’s Beanpot, but they get a postseason matchup in the quarterfinals of the Hockey East. BU is looking to ride their young talent to their ninth Hockey East Championship. Northeastern wants to ride their experience to their second consecutive conference championship.

This might be the most intriguing matchup of the four series. BU probably has the rawest talent in the conference with Clayton Keller, Kieffer Bellows, and Patrick Harper leading the Terriers as freshmen. They’re bolstered by more experienced players like Jakob Forsbacka Karlsson, Bobo Carpenter, and Jordan Greenway. All these skaters have double digit points, and BU can go deeper than that, especially with Doyle Somerby and John MacLeod on the back end.

BU is also fortunate enough to have Jake Oettinger in their net. The freshman has the best save percentage and best goals allowed average in the conference. Despite this talent, BU has dropped their level of play in important games this season. They were swept by Merrimack and barely skated by Lowell, saved by the extraordinary play of Oettinger, in one week. They couldn’t match Harvard’s intensity in the Beanpot Final and lost at home to Notre Dame with a chance to take complete control of the regular season crown.

Northeastern will have no issue knowing the intensity of the moment. They are trying to repeat their run from last year and they know this Terrier team. They tied at Matthews Arena to open the Hockey East season and then lost to BU 3-0 the next day. Since then, Northeastern’s offense turned into one of the best in the nation, anchored by Hobey Baker candidate Zach Aston-Reese. His 30 goals are joined up top by twins Nolan and John Stevens, who are now healthy after difficult seasons.

The Huskies can roll 50 point scorers in Garret Cocerill and Dylan Sikura off their bench to keep up the pressure. The question is whether Ryan Ruck can withstand the pressure from BU’s offense. In my estimation, I don’t think so. BU’s defense will make life more difficult for the Huskies than Northeastern’s defense will for the Terriers. It will take 3 games, but BU will move on to the semi-finals.

Based on the regular season series between these two, this may be the most even series. On February 17th and 18th, the Catamounts went to Chestnut Hill and tied the eagles 2-2 and 3-3. There are no ties in the playoffs, so someone will win. And this is the most difficult series to call. The teams match up well. Neither team leans on their offense. Neither team has a player in the top 20 scorers in the conference. BC is the second highest scoring team in the conference, led by Matthew Gaudreau, Austin Cangelosi, and Collin White. Vermont is paced by Brian Bowen and Mario Puskarich. The problem for the Catamounts is that no scorer is above 27 points and only three skaters have 20 or more points. Fortunately, they have found more offensive rhythm late in the season, with three or more goals in every game since mid-January.

The difference for me is recent momentum. Vermont has found their offense and can make plenty of plays against the Eagles as shown by their weekend in the heights. They swept Merrimack in convincing fashion to end the regular season and they dominated Maine to open the postseason. Boston College is struggling lately. Since the start of the Beanpot, the Eagles have gone 0-5-2, with Joseph Woll not playing up to his ability, his defense letting him down, and the offense slumping at the worst possible time. If the Eagles can find their offense, then they’ll move on. However, I do not think they will. I think BC will continue to struggle to play with a hot Catamount team and this is the only series I think the road team will win. It will take three games, but the Eagles will not get the scoring they need.

This is the only matchup not held in New England this weekend. It will also be the last Hockey East series held in South Bend. Notre Dame will leave the conference for the nearer pastures of the Big 10 Conference next season. They will be motivated to go out of their final Hockey East season with a conference championship. They finished one point behind Lowell, BU, and BC for the regular season championship, and they will look to win the tournament. They have a talented opponent who has been on fire since the new year began.

The Friars are 14-3-2 since 2017 got underway. Unfortunately for the men in black, none of their wins came against the Irish. The teams faced off less than a month ago in South Bend. Notre Dame won the first game 4-1 behind a three-goal third period and a two-goal performance from Anders Bjork. The second game was a 3-3 tie that Notre Dame came back from three different times to scratch out a point. Providence has struggled against the Irish in South Bend, and despite their talent, I do not see those struggles ending.

Unfortunately for the men in black, none of their wins came against the Irish. The teams faced off less than a month ago in South Bend. Notre Dame won the first game 4-1 behind a three-goal third period and a two-goal performance from Anders Bjork. The second game was a 3-3 tie that Notre Dame came back from three different times to scratch out a point. Providence has struggled against the Irish in South Bend, and despite their talent, I do not see those struggles ending.

Providence has the top scoring defense in the conference, with a physical lineup and Hayden Hawkey in net. They only have a middling offense within the conference, pinning their hopes on Brian Pinho and Erik Foley. If those two can’t make things happen, the Friars might have offensive struggles against Mike Richter award semifinalist Cal Petersen. Notre Dame can look to a deep pool of offensive talent, including Bjork, Jake Evans, and Andrew Ogilvie. Providence will play hard and make life difficult for the Irish, but the Friars will not solve the puzzle of Cal Petersen in South Bend and will fall in three entertaining games.