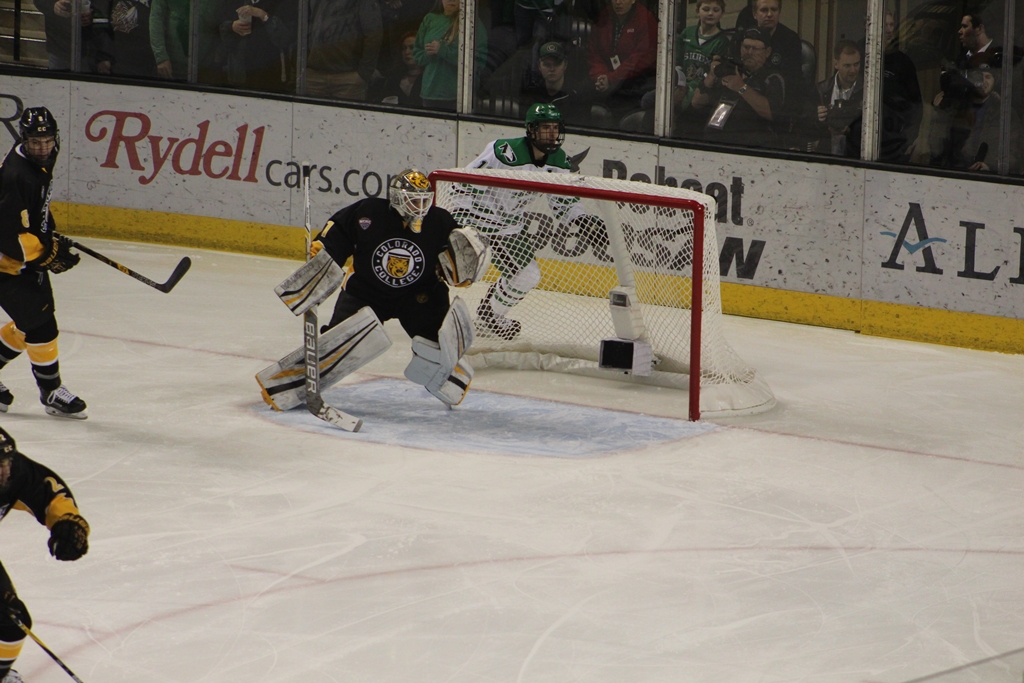 North Andover, MA — Merrimack endured a frustrating 2018. The Warriors finished the 17-18 regular season near the bottom of Hockey East. Yet they rallied to win a pair of overtime games against UMass Lowell to end the Riverhawks’ run of five straight Hockey East Title games. The next round, they faced the top-seeded Boston College Eagles and forced both games to overtime before falling to end the season. Shortly thereafter, the Warriros relieve Mark Dennehy of his head coaching duties after 13 years in North Andover.

Merrimack then hired former UNH and Providence Assistant Coach Scott Borek to the head role and embarked on a frustrating first half to the 18-19 season. They showed some life against BU and BC, but struggled to find a winning formula. They closed the calender year with perhaps their most frustrating game of the year against the Colorado College Tigers.

The Warriors did have a promising start. Tyler Drevitch took a Jordan Seyfert feed backdoor and slipped it through Tiger goalie Alex Leclerc for the lead only 3:13 into the game. But CC had a fast answer. Zach Berzolla took a shot from the point and Troy Conzo tipped it through to tie the game 2:03 after surrendering the lead. Merrimack then proceeded to beat Leclerc three more times and draw iron every time.

The most painful ring came when Drevitch rang the iron in tight and the Tigers drove the opposite way, ending in Alex Berardinelli’s seventh goal of the year and a 2-1 lead. CC also had a goal called back due to goaltender interference, so the margin remained one goal at intermission.

Merrimack again won the shot counter in the second period, but the Tigers mostly dictated the pace and won the period. Trevor Gooch caught iron at the offensive end, but stayed with the play and scored his seventh goal of the year seconds after hitting iron. CC added a power play goal when Grant Cruikshank found twine and staked the Tigers to a 4-1 lead. Merrimack had three power plays of their own in the frame, but only had five shots and got no closer before the break.

Scott Borek’s squad won the third-period shots 11-6 but did not get cut the lead closer. They also pulled Craig Pantano after two periods and 4 goals on 17 shots faced. Drew Vogler went in and faced only six shots in the third. One got through. Westin Michaud posted a goal for his third multi-point game this season, and the scoring ended at 5-1 in Colorado College’s favor.

The Tigers improve their record to 8-9-2 with the win. CC’s Head Coach, Mike Haviland, was pleased with his team’s performance.

“I thought we got better as the game went along,” Haviland said. “There’s not a lot of room here. I think we’ve got some skilled guys who wanted more time. And they did a good job of taking it away from us. We didn’t put enough pucks behind them in the first. Credit them but we’ve gotta have that mindset of getting things behind. I thought we did a better job of that in the second.”

Defenseman Zach Berzolla notched a career-high three assists, doubling his season’s point output in one fell swoop. Alex Leclerc recorded 38 saves, tied for the second most he’s made this year.

CC finishes their eastern road trip on Wednesday with their first game in 2019 coming against the Maine Black Bears in Orono. Puck drops at 6 pm ET on January 2nd.

“We generated a lot. That’s by far the most shots we’ve put on net this year”, mused Coach Borek after his team’s fifth straight loss. “We had some good second opportunities in the second half of the game. We didn’t finish at the net front and we clearly didn’t protect our net front well enough.” When asked about lessons from playing western teams, Borek quipped: “What you learn is do we skate well enough to play at the level? And right now we don’t. That’s evident to anyone who was there. But we’re getting there.”

Merrimack will open 2019 with hope for improvement and a full first eight days. They’ll travel to Hockey East opponents New Hampshire and Northeastern on Friday and Saturday. Puck drops at the Whittimore Center on January 4th and at Matthews Arena on January 5th at 7 pm. They then travel to Ann Arbor to face the Michigan Wolverines on Tuesday, January 8th. Puck drops at 7:30 ET/6:30 CT at Yost Ice Arena.