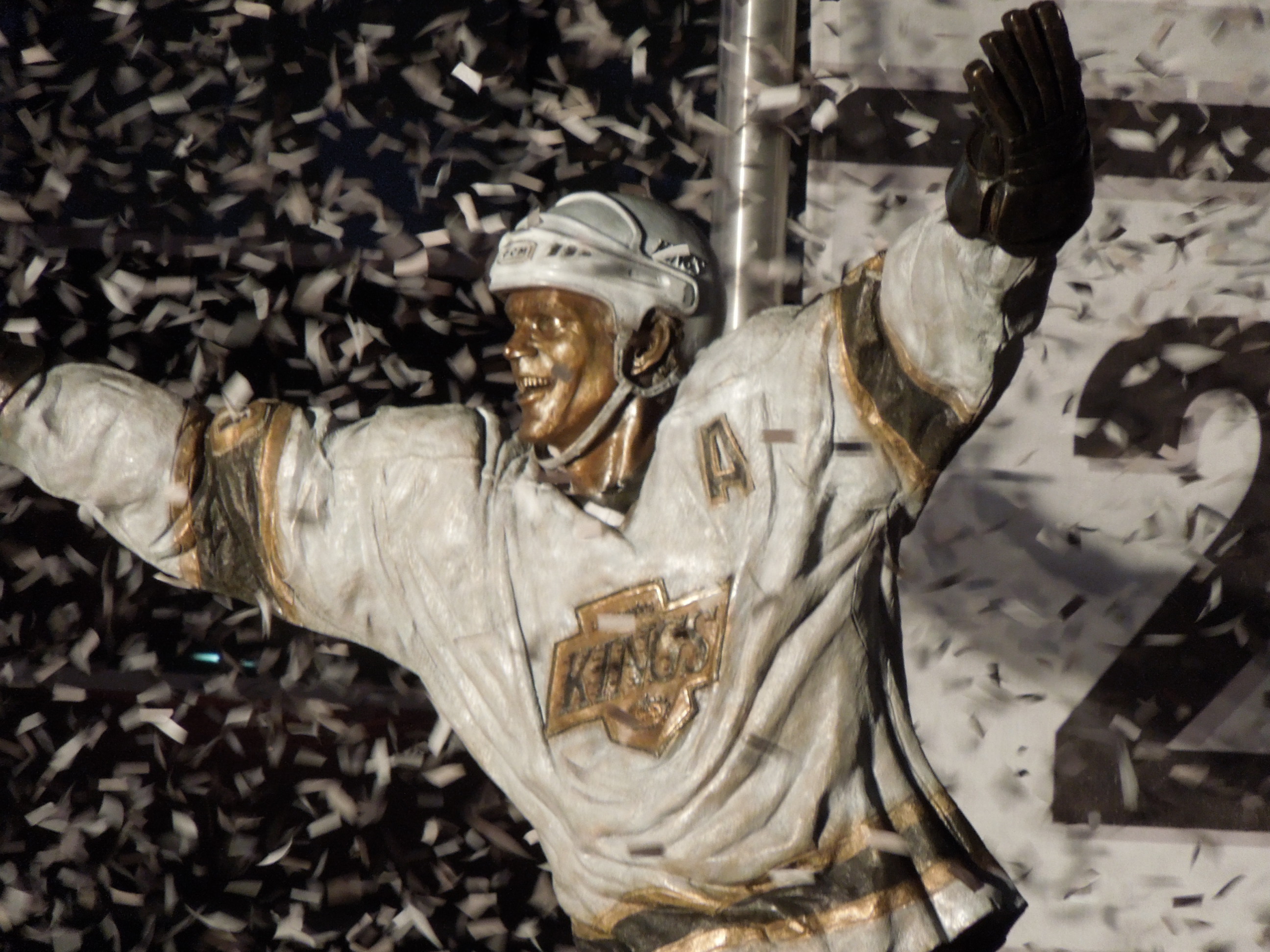 Hard to believe the following words: some of the greatest living hockey players in the world were in one place on Saturday night. That place was LA. And many of those players were former Kings. Think Gretzky, Blake, and Robitaille. But especially think Robitaille, because it was his night to be honored, his night to have a statue unveiled to stand alongside those of Gretzky, Oscar de la Hoya, and Jerry West, the basketball player, outside Staples Center.

It happened before the game versus Pittsburgh, which is why, in addition, such greats as Mario Lemieux were there. Add to that Marc Bergevin, now GM of Montreal, and some lesser Kings lights (Modry, Emerson, Fox, now of course the TV color man), and you’ve got a full complement of players who might do quite well at an old-timer’s game, thank you very much.

Various people, including the head muckety-muck of the corporation which owns the Kings and well as Gretzky, Blake, and Robitaille’s son and spouse, spoke. The message they shared was that Luc loves the team and the fans, and he shows it in the way he interacts with them. The crowd was reminded that it was Robitaille who masterminded the outdoor game of 2014, amongst other things.

Robitaille himself credited his family, both his dad (in attendance) and mom (now gone), as well as his siblings, who were there, for his success. Stacia, his wife, credited him for teaching the lesson of humility and hard work every day.

And then it was time for the statue. A video of Robitaille’s career highlights—well, who are we kidding, a tiny portion of them from a Hall of Fame career—played, showing intercuts of the statue being made. Then the family was up front and the cloth draping was pulled off. There was Robitaille, arms raised in a perpetual goal celebration, sweater colored gold and white. The cannons blew paper confetti all over the place, making for spectacular pictures (and a spectacular mess for someone to sweep up).

Bob Miller had earlier joked that Robitaille had been inquiring recently about the local pigeon population, and Robitaille himself that his mom would be around the area keeping the pests away.

Certainly the statue puts the player in a different space than he had been, what with his sweater number (20) retired and his likeness in the Hockey Hall of Fame in Toronto. Call this statue the hat trick of honors, and you’d have it about right.

It hardly seems as important to talk about the game as to go on and on about the statue, but hey, they Kings and Penguins played, so here’s a bit on that:

Pittsburgh won last night in Anaheim, a game I reported on for IH. They were not beholden to their main dudes, Crosby-Malkin, but rather got goals from elsewhere (actually, elsewhere as well, because both Malkin and Crosby notched one, the latter, Crosby’s, into an empty net), namely Hornqvist and Comeau. They used their backup netminder in the win. On Saturday, Fleury was in net, and he was quickly put to work. The Kings were all over the puck, and they had 12 shots in period one, ten in period two. None went in, nor did any in period three.

In the early going, no save was particularly spectacular, but one that stood out came in the second, with Tyler Toffoli reaching for a rebound. He couldn’t quite get to it, but Fleury was in full splits if he had, and the puck came to him weakly, but allowed him to showcase his athleticism nonetheless.

In the first, the Kings poured on the action on the power play, at one point having a sequence where there was a shot, shot-rebound, then another shot. The shooters? Carter, Kopitar, Doughty, in that order.

The Penguins had a good power play of their own, but they were more dangerous after. Crosby went down the slot and fired a shot despite being interfered with. He hit the crossbar behind Jonathan Quick.

In period two, the chances were about even, though Pittsburgh launched but six shots. On the power play, they had a double deflection that didn’t get through. Kunitz and fired one that Drew Doughty got down on one knee to block. And the best chance came when Crosby held the puck and took it back up the right wall to the blueline, passed it off and got it back, then went to the net and turned, firing a backhand that hit Quick up high.

The Kings’ best chance came when the fourth line—Nolan, Clifford, and Shore, banged away and jammed at the puck.

All to no effect, as nobody scored through two. What did the action to that point say? That the Kings are capable of opening up when they want to. That they can shoot the puck and pass it with the best. And that any moment that you stop watching, Crosby, Malkin, Kunitz, or another sniper (Hornqvist, silent early on this night with just one shot through two periods, but wait . . .) can burn you.

The third period produced no goals either, though one was waved off for the Kings, because Dustin Brown had passed through the crease and made a save by Fleury impossible. There was little disputing the call, which was made immediately and forcefully by the referee on the spot.

One thing notable in the frame was that the Kings played the Brown-Stoll-Williams line very little. In fact, they were out for one shift of every two that the other lines had. They ended with an average of about 14 minutes, but with more sparse duty late than early on.

The game was won in OT, with the Kings ending with 31 shots and none beating Fleury, but the Pens ending with just 18, one of which was successful. It was a dead giveaway, Carter going out front of his own net with a pass to Toffoli, who made a weak pass/clear and got the puck stolen by Hornqvist, Friday’s hero in Anaheim. He did a quick juke with the puck and fired a wrister about a foot off the ice to beat Quick.

My book Facing Wayne Gretzky is reviewed in this week’s The Hockey News.