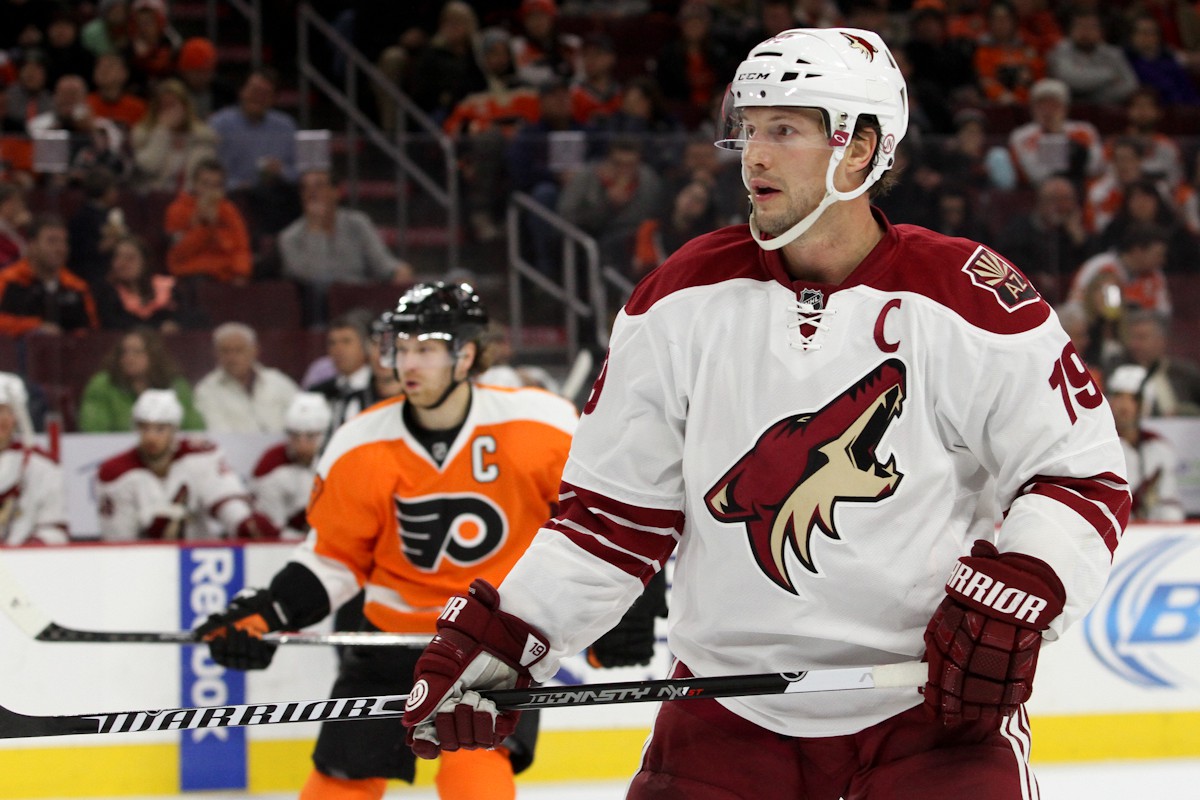 2013 will see a few NHL teams going to the playoffs for the first time in a long time. As the season went along, they talked about the novelty of playing “meaningful games” down the stretch. The Phoenix Coyotes are not playing games like that right now. They haven’t been since they lost to Detroit last Monday.

The Coyotes had three games to play after they were eliminated from the playoffs. They won the first against San Jose, lost the second against Colorado, and will play one more on Saturday in Anaheim. Are such games meaningless? Coyotes Captain Shane Doan doesn’t think so:

You love to play, … you love to compete, I don’t care what you do, you’re going to try to find a way to win… You love to compete, and then on top of that my favorite thing to do is play hockey. Put those two together and it’s pretty easy to come up with a reason to go out there and try to perform and … give the best you can because you love the game and it’s so much fun to play.

For some players these games are a chance to prove their value before negotiating new contracts. Some need to earn a spot on next year’s roster. Those factors don’t change because the team missed the playoffs.

Some of the Coyotes did an exercise to end practice on Thursday. It involved receiving a pass and passing again or shooting. If a player missed a pass or missed the net, he was eliminated, left to stand on the sidelines and watch. The others got to keep playing.

It was not unlike a hockey season, with the object being to stay in the game until there is no game left to play. These players are professionally competitive, of course they like winning. So that is the point, is always the point, never stops being the point even if they know they won’t make the playoffs.

Sometimes that isn’t enough. Sometimes even when a team is still in the running for a playoff spot or a higher seed, they can’t quite get up for a game. That isn’t a lack of desire to win. Are players even aware of not being ready to give their all, or is it only something they recognize after the fact?

I don’t know, … you always think you are, you’re always trying to be. And there’s obviously nights when you feel better than other nights and you try to pinpoint what it is and maybe it’s your preparation, maybe it’s your attitude, not just to the game, but your overall attitude I think is a huge part of it. If you let yourself start feeling sorry for yourself in general it’s pretty easy to go out there and kind of mope around.

Doan’s answer brings to mind the switch that everyone talks about flipping, the intangible mental boost that can help a team make up for lost ground. The same switch is rumored to kick a team into overdrive for the playoffs, though they finished the regular season in neutral. Even if the switch works, you still don’t know where it was or who flipped it.

Some of the Coyotes may finish the season in playoff games if they are sent back to the Portland Pirates for Calder Cup playoffs next week. Coyotes forward Chris Conner, without knowing for certain whether or not he will be sent down, is eager to keep playing after the Coyotes are done:

I haven’t been told anything but yeah I think there’s a couple of us that will probably be going. I’m looking forward to it, get there and play some playoff games and have fun.

The fact that the Coyotes’ AHL and ECHL affiliates are both in their respective playoffs suggests a healthy depth that is masked by a disappointing end to the NHL team’s season. It may be small consolation to Coyotes fans, but it is still a good sign for the team’s future.

It is difficult to classify the Coyotes’ shortened season as a failure, though there are no loser points awarded for teams that are in the running until the last week of the regular season. No matter what happens, the positives that a team can take from one season into the next shouldn’t be ignored just because the season ended early. Doan mentioned the team’s defense in particular as a positive:

I’m ecstatic about our blue line. Our blue line is so good and it’s getting better and our young guys are getting better and are improving. Going forward, obviously you’d love for the whole ownership thing to be settled and hopefully by the time the summer comes you can get the ownership and … go forward with that. I think we’ve got some good young players that are developing, and … you look at some of the guys that came in that are playing well for us and that’s exciting.

There it is, intruding right in the middle of the Captain’s thoughts on the team’s strengths. It is what everyone thinks about when they think about the Coyotes: ownership. Is there a trick to putting the ownership question out of your mind?

There must be, I’m not sure if I’ve ever found it… It’s a daily thing, that you choose to ignore the elephant in the room. But at the same time it’s out of your control so it makes it easier if you can simply focus on the things you can control, it makes it easier but I’d love for it to be done.

Professional hockey players accept uncertainty in their lives. They go where they can play. They may uproot their families or be without them for extended periods of time. That doesn’t mean they like it that way. Given the choice, a player will go somewhere that he can stay for as long as possible. Some degree of security and stability is preferable.

Every team has players who don’t know where they will be playing next season, but what happens when a whole team doesn’t know? Despite that lack of certainty about their future, the Coyotes played well and made the playoffs three seasons in a row. It begs the question: what would this team do if they could finally set the doubt down and simply play hockey? Is that ownership elephant just in the room, or is it resting a foot on the team’s shoulders?