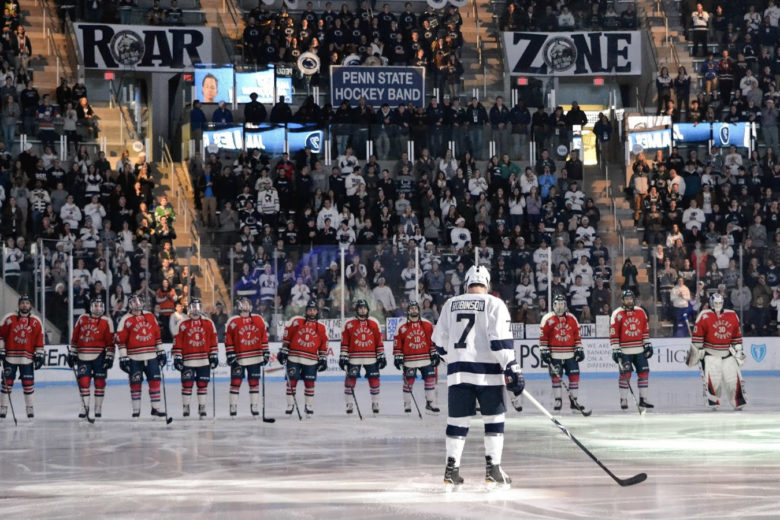 Captain James Robinson takes to the ice in the series against Robert Morris.

As the Nittany Lions prepare for the series with Ohio State this weekend, we look back that the previous Big Ten games played this season.  Penn State started their conference play in mid-October against the Minnesota Golden Gophers and split the series with a 3-1 win and a 6-3 loss.

After a non-conference series with American International, PSU went on to their next Big Ten play against Michigan.  Again the Nittany Lions would split the series against the Wolverines with a 5-4 win in overtime and a 5-2 loss.

Penn State had another non-conference series in between conference play, this time against Mercyhurst before traveling to South Bend, IN to take on the Fighting Irish of Notre Dame.  Notre Dame swept the series from the Nittany Lions 5-3 and 1-0.  Another road trip and another non-conference game, this time against Arizona State, put the Lions back on track with a 7-0 shutout and a 4-2 win over the Sun Devils.

The Nittany Lions returned home for their conference match-up against Michigan State and prevailed with a 7-2 win and a 2-2 tie with a loss in the sudden-death shootout.  Another road trip would be on the schedule with Penn State traveling to Columbus to take on Ohio State.  The Lions carried the momentum from the Michigan State series and swept the Buckeyes 5-5 with a sudden-death overtime goal and a 4-0 shut out the following night.  Ohio State is going to be looking for a little revenge this weekend after the loss at home and Penn State knows it.  The last time the Buckeyes played at Pegula they left a broom on the ice as a reminder of what the result of the series was.

With a solid series sweep against Robert Morris that was played at both the PPG Paints Arena and Pegula Ice Arena, Penn State headed into the holiday break with a record of 12-8-1.

Penn State started 2018 with the series against the Wisconsin Badgers.  The last time these two teams met was in the Big Ten Championship game and Penn State came out of that the winner in double overtime and history would repeat itself with another game-winning goal during the sudden death shootout for a Penn State win.  The Nittany Lions took the series with Badgers with a 5-1 win and 3-3 tie with the shootout goal for the win.

The Nittany Lions go into the weekend series against the 6th ranked Ohio State Badgers with a 10-game unbeaten streak, which is the longest in program history.