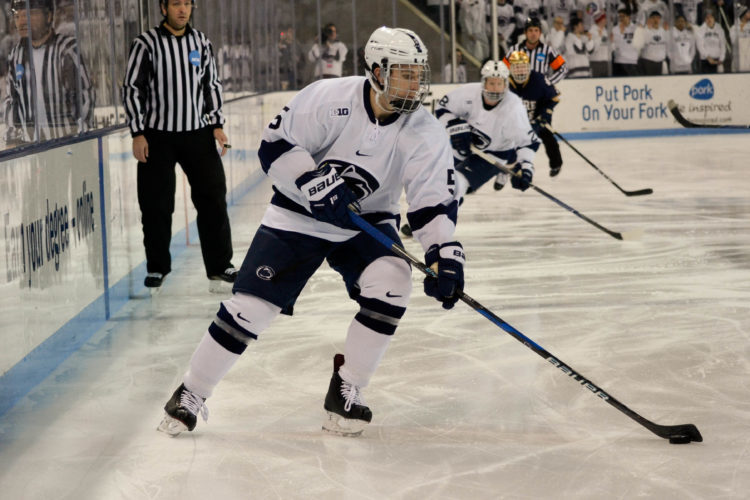 Philadelphia, PA — Since joining the Division I ranks, Penn State has been a hot conversation topic. At the decade’s start, it was regarding realignment and altering the conference landscape. That topic lingers late into 2018, but much of the conversation has shifted to the Nittany Lion’s offensive potential. Penn State has averaged over five goals per game this season and entered Saturday night with 23 more goals scored than the second placed team, Minnesota State.

To close the first semester, the Nittany Lions traveled to Philadelphia for the sixth annual Philadelphia College Hockey Faceoff. Against Princeton University at the Wells Fargo Center, college hockey’s most potent offense flaunted their skill again but allowed the Tigers life late into the night.

Penn State came out firing in the first period, outshooting the Tigers 15-3. They controlled the boards, passed the puck beautifully, and stretched out the Tigers’ starting netminder, Ryan Ferland. First, though, Penn State broke down in their own end and Josh Teves staked the Tigers to a 1-0 lead only 2:24 into the game.

The guests from Happy Valley were unphased and resumed their attack, resulting in a beautiful Brendan Biro equalizer goal. Near the halfway point of the period, Nikita Pavlychev took an interference minor. Again unphased, Nate Sucese charged down the ice and potted a shorthanded goal through Ferland to give Penn State the lead. The Nittany Lions rode one more offensive push to a Chase Berger goal to led 3-1 at Intermission.

The onslaught from Hockey Valley continued off the second period’s jump. Alec Marsh split the Princeton defense and scored the 4-1 goal only 17 seconds into the next period. Immediately thereafter, Ryan Ferland was pulled and replaced by Austin Shaw. The senior from Denver, CO, immediately faced a breakaway and a power play. He held his own and kept Princeton mostly even for the second period. The Tigers offense got one puck through late on a Max Veranneau breakout and trailed only 4-2 at intermission.

Princeton tilted the ice in their favor for much of the third. They outshot the nation’s best offense 17-7 and found cracks in Peyton Jones’ armor. First, Max Veranneau potted his second goal of the game off a Ryan Kuffner feed. Then in the final minutes, Veronneau clanged the crossbar and Kuffner cleaned up the rebound for the equalizer.

The teams skated an entertaining overtime frame that tested both Shaw and Jones. Both held up and kept the score knotted at 4-4 after five minutes of thrilling extra hockey.

Princeton ends a hard first half with a stirring comeback effort and a 3-8-2 record. Ryan Kuffner spoke highly of his team through the bumps and struggles of the first semester.

“It’s been a tough month,” Kuffner said. “We’ve been playing decently well but we haven’t been able to catch a break. To end the skid right before the break, I think that’s massive. It’s huge just to reset and know how much of the season is left.”

Princeton next hits the ice on December 28th and 29th with a home series against the Maine Black Bears. Puck drops at 7 pm both nights at Hobey Baker Rink.

Penn State offered a beautiful show of offensive talent and a concerningly poor late defensive effort. They end the first half at 11-5-2.

“You have to give Princeton a ton of credit,” said Nittany Lion Head Coach Guy Gadowsky. “I think we were hoping that they wanted to go start Christmas.”

Alex Limoges recorded an assist on Berger’s goal to tie teammate Evan Barrett for the nation’s lead in scoring. Barrett did not play, as he’s away at camp for the USA’s World Junior team.

Penn State has participated in all six Philadelphia College Hockey Faceoffs and are 3-2-1 in those games.

The Nittany Lions next hit the ice on January 4th and 5th when Big 10 play resumes. They travel to Minnesota for a weekend series against the Golden Gophers. Puck drops at 9 pm ET/8 pm CT on Friday night and 8 pm ET/7 pm CT on Saturday night at Mariucci Arena.