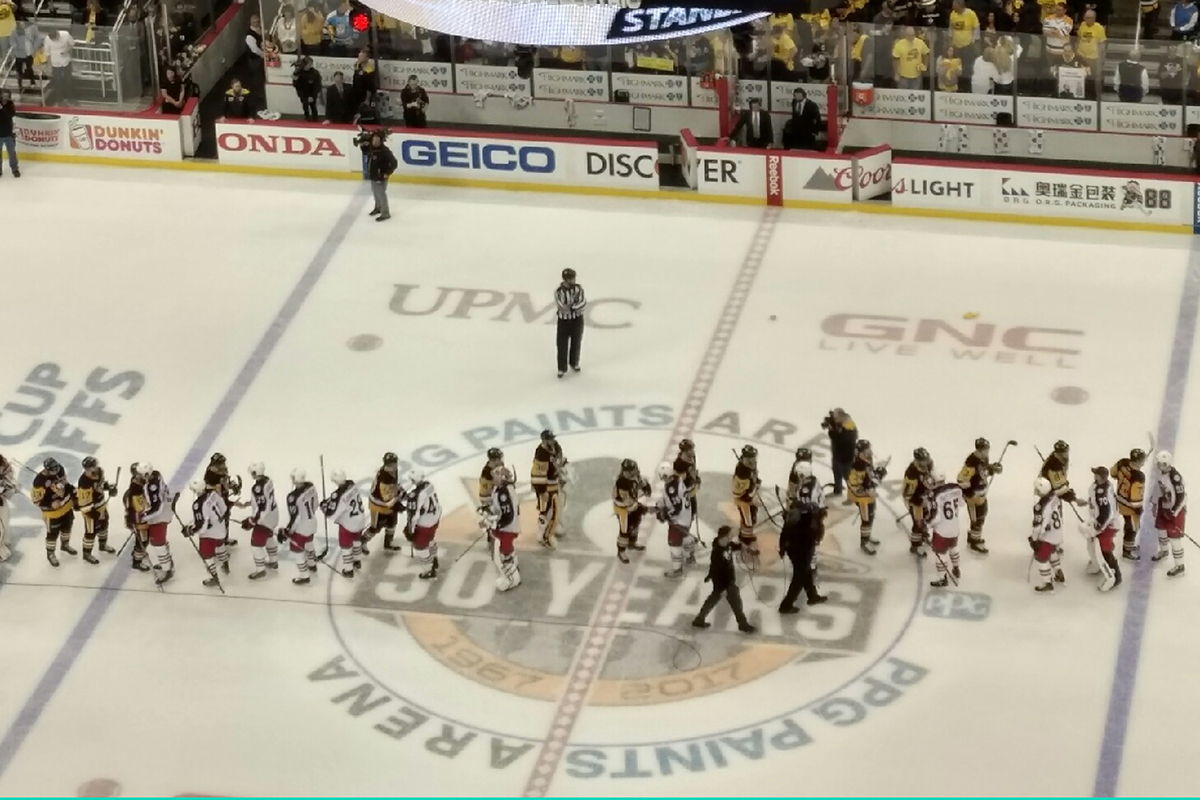 For a little while, it looked like the Pittsburgh Penguins’ chance to clinch their first-round playoff series on home ice was slipping away.

After building a 3-0 lead on a first-period laser from Phil Kessel in the first and two goals, just 2:43 apart, from Bryan Rust in the second, the Penguins took their foot off the gas.

Goaltender Marc-Andre Fleury, stellar through the first 29:30, let up a soft goal to Blue Jackets forward William Karlsson.  A few minutes later, with Penguins defenseman Trevor Daley in the penalty box, Columbus wreaked havoc around the net and got behind Fleury for a power play goal from Boone Jenner, closing the gap to 3-2.

The Penguins couldn’t capitalize on a power play of their own to end the second. Then, early in the third, Columbus almost came all the way back when an apparent goal by Oliver Bjorkstrand was waved off for interference on Fleury. Pittsburgh’s Scott Wilson seemed to hook Alex Wennberg and drive him into Fleury, but the interference call stood – and, to add insult to injury, Wennberg went to the box.

The Penguins went to work on the power play. And, with just 21 seconds remaining on the man-advantage, Penguins captain Sidney Crosby got the puck at a sharp angle, went down on one knee and gave his team a 4-2 insurance goal.

Blue Jackets head coach John Tortorella was incensed on the bench, but declined to talk about the sequence of events afterward.

“You guys watched the game; you don’t need my help with that,” Tortorella said. “I am not talking about it; stop baiting me into it, please. There’s no sense in me having a viewpoint on it. It happened.”

“It is what it is,” Wennberg said. “I had no intention to hit Fleury; I think he’s far out and I’m just trying to skate by and get to the net. It’s a game-changer right there.”

Wilson added another insurance goal less than a minute later to make it 5-2 in favor of the home team. After that, not much was left but the handshake line.

“Tonight was a microcosm of the series,” said Penguins head coach Mike Sullivan, who served as Tortorella’s assistant coach for six seasons with three teams. “There were momentum swings both ways. We had it for a while and they had it for a while.

“I don’t know that, at any moment of any game, any one of us felt like we settled into the game. It felt like it was an emotional rollercoaster. That’s how I look back on the five games that were played.”

Thursday’s Game 5 was particularly important, as the Penguins had to refocus after failing to clinch the series in Columbus.

“I think guys in the locker room have been there before,” Rust said. “We’ve had elimination games that we haven’t won. We just try to take each day as it comes; each day is a new day. Learn from the past game and move forward. I think that’s what we did. We embraced the challenge and had fun with it.”

As for the Blue Jackets, their head coach remained proud of what his young group, third in the Metro Division and fourth in the NHL this season, accomplished.

“We’re a good team,” Tortorella said. “I’m not going to the [youth] and inexperience; I thought our guys had no fear. Playing against the Stanley Cup champ, a very good team, and we put a ton of good minutes in. That’s not a 4-1 series. I’m not going to [complain] about it; they win. But I like a lot of things about our club.”

The Penguins will have some time to rest before moving on to face either the Washington Capitals or Toronto Maple Leafs in the next round. They’ll also have some time to work on the things they didn’t do so well against Columbus.

“I believe that our best hockey is ahead of us,” Sullivan said. “And it starts with coming out of our end zone cleaner than we did in this series. I don’t think we did as good a job as we could have, or should have, given the situations.

“But you have to give Columbus a lot of credit.  They’re one of the better forechecking teams in the league. They have speed, they have size and they play to their strengths. They’re a physical team, and they put pressure on you.”

Pittsburgh would also like to avoid having their netminder face 51 shots, as he did in Game 5. But Fleury was up to the challenge, as he was for large stretches of the series – save for an especially rough outing in Game 4 – since expected starter Matt Murray bowed out to injury before Game 1.

“He was really tremendous in this series,” said defenseman Ron Hainsey. “When Murr went down, you’ve got a guy stepping in who’s done it before. Great goalie, and I think the guys fed off of that.

“He played great in the first 10 minutes of Game 1. That was not great for us and we could’ve been down 2-0, 3-0 easily. He stood on his head; did the job. We were able to get that game later on, and away we went.”

Fleury was thankful for the opportunity.

“This was up there, to be here at home in front of our fans and to be able to get that win, and with the support that they gave me throughout the season and all these years,” he said. “I still get butterflies and goosebumps when the crowd chants. I’m happy that I was able to contribute.”

So did Evgeni Malkin and Kessel, who quietly lead the playoffs with 11 and 8 points respectively, and the duo of Crosby and Jake Guentzel, next in line with 7 and 6. Rust continues to establish his reputation as a big-game player. And the defense is doing its best to shoulder the absence of Kris Letang through a by-committee approach.

“I think every year, every team writes its own story,” Sullivan said. “There’s different circumstances surrounding the team. We have similar players, obviously there’s some changes, from our team last year. But this is a whole different experience. This is a new season; there are new challenges. As a group, it’s our job and our responsibility to meet those challenges as best we can.

“I’ve said this so many times, but what we really admire about this group of players is the resilience that they show. It’s never perfect out there by any stretch, but we love their compete level. We love their ability to respond to the adversity and challenges we face throughout the course of a season, game or series. We believe we have a lot of character in our room.”