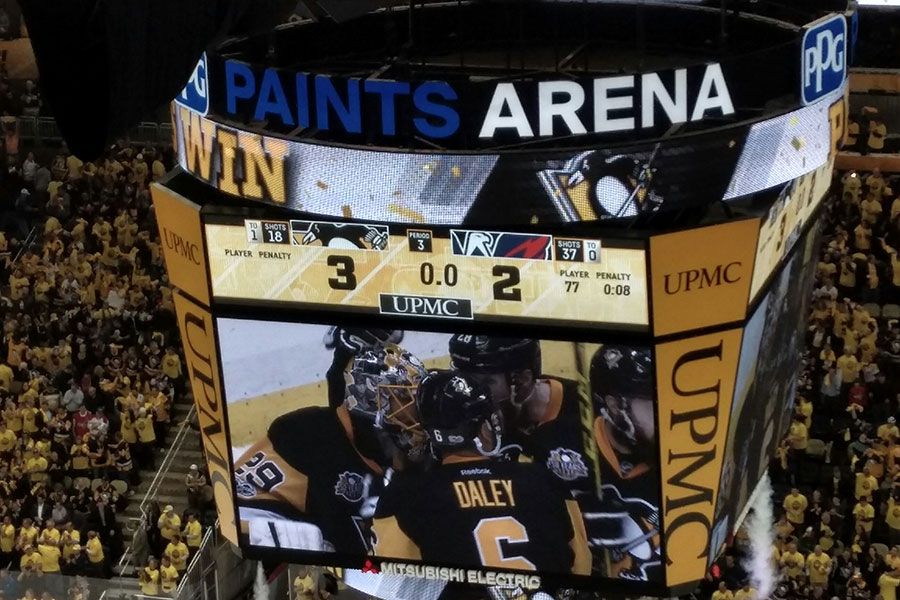 Penguins ‘Win One for Sid’ in Game 4

As the Pittsburgh Penguins headed into Game 4 against the Washington Capitals without Sidney Crosby, there was only one kind of retaliation on their minds for the play that sidelined their captain with a concussion.

“In the postseason, if you do retaliate and take a penalty and they score on the resulting power play, how much did it really help your team getting that chunk of flesh?” said defenseman Ian Cole. “Did it make you feel better? Great, but your team might’ve lost the game because of it.

“There’s always a little more weight with every decision you make in playoff time. You obviously want to get retribution for Sid. You want to stand up for your teammates, always do. But you have to be smart about how you go about it, and often the best way to do that is to win hockey games and continue playing hockey.”

In other words – in the mantra of head coach Mike Sullivan – just play.

Wednesday, that’s exactly what the Penguins did. And much like Games 1 and 2 of this series, despite the stats saying they had no business emerging with a win, they did that, too, to take a 3-1 stranglehold on the series.

Pittsburgh opened the scoring early with an individual effort from forward Patric Hornqvist. At 4:39, he broke into the Capitals zone, split defensemen Brooks Orpik and Karl Alzner, and lifted the puck over goaltender Braden Holtby.

“I think that’s always important; the percentage of scoring first to win the game is probably pretty high,” Hornqvist said. “You want to get that start, that confidence and that momentum.”

Later in the period, Hornqvist was on the receiving end of a shot instead, taking one from Orpik at close range off of his inner leg. He struggled on the bench, trying to walk off the injury, and stayed in the game.

At the other end of the ice, Penguins goaltender Marc-Andre Fleury stood tall, stopping all 12 Capitals shots he faced, including a couple of spectacular multi-save sequences.

“The way Flower’s playing, he’s obviously leading our team,” said Chris Kunitz. “Everybody sees that work ethic, how determined he is and the saves he makes, and it just feeds into our whole game plan.”

The Penguins scored early in the next frame, too, with Jake Guentzel, Crosby’s rookie linemate, wristing a shot toward the net at 3:51. It deflected in off the skate of Capitals defenseman Dmitry Orlov, and it was starting to feel definitively like it would not be the Capitals’ night.

But a few minutes later, it took the Capitals all of 1:12 to climb all the way back in. Two longer-range shots, from center Evgeny Kuznetsov and defenseman Nate Schmidt, found their way past Fleury, and Washington had a new lease on their playoff life.

When Caps defenseman John Carlson took a penalty at 10:45, it didn’t seem like much of a potential game-changer. The Penguins power play had been anything but powerful to that point, after all, going 1 for 12 in the series so far.

But at 11:24, with the Penguins moving the puck from Guentzel to Evgeni Malkin to Justin Schultz, the mobile defenseman wasted no time putting it on net and past Holtby.

Pittsburgh regained a 3-2 lead, and Schultz’s goal held up as the eventual game-winner.

The Capitals had their chances. The Penguins’ penalty kill came up big a total of four times on the night, including on an abbreviated double-minor to Matt Cullen for getting his stick up and cutting the Capitals’ Justin Williams to end the second and start the third.

“Special teams [are] an important element in this series in particular, because both teams have pretty dangerous power plays,” Sullivan said. “So our ability to get the job done on the penalty kill certainly increases our opportunity to win games. Our power play gets a key goal for us at a key time tonight, and it ends up being the difference in the hockey game.”

And then there was Fleury. With Holtby facing just 18 shots on the night, his Pittsburgh counterpart was busy making 36 saves on the 38 shots he saw, including a stunning, post-to-post stop on forward Lars Eller at 9:10 of the final frame.

Fleury with a great save to preserve the lead pic.twitter.com/Bf6L7nM3BI

“They’ve got a lot of skill and talent over there,” Schultz said. “We’ve got to do a little better job of closing in on them and not give them so much space, but we found a way to get the win, and that’s all that matters.”

In their last chance to generate the tying goal, the Capitals pulled Holtby with 1:52 remaining and, just as they started to pressure, T.J. Oshie got called for a questionable high stick on Nick Bonino that didn’t appear to make contact with the Penguins’ forward.

Quite the sell-job by Bonino… Not a chance Oshie’s stick caught him in the face pic.twitter.com/rwunHuGdRD

Washington got Holtby off to even out the numbers when they got into the Penguins zone, but Pittsburgh held on.

The Penguins were physical with 40 hits on the night, including a big, open-ice check from Cole on Williams with five minutes remaining. They were willing to pay the price with their bodies, blocking 24 shots to the Capitals’ 11 – including that one that hobbled Hornqvist.

“I don’t know that there’s a player out there who’s playing in the playoffs right now who isn’t sore in some way, shape or form,” Sullivan said. “I just don’t think teams get this far if you don’t pay a price. So, yeah, we’ve got some guys that are playing through some bumps and bruises, just like every other team that’s still playing.

“Horny’s a guy who plays through a lot. He loves to compete; he’s got an insatiable appetite to win. And we love his fire. I think it’s contagious on the bench. He’s a passionate guy; he wears his emotions right on his chest, and I really think it helps our team. It boosts our energy.”

The energy was more tempered on the other side of this longtime rivalry, where the Capitals have thrown all they could at the Penguins for at least three of the four games, yet find themselves facing elimination in Saturday’s Game 5.

“That’s sort of the deal that you’re dealt,” said Capitals head coach Barry Trotz. “You’re in the playoffs; you’re going to have a lot of different things that are going to happen to you. You need a save, or that goal goes off our guy into the net. You’ve just got to mentally fight through it.

“Now we’re down 3-1, and our backs are against the wall. Next game is the most important game of the year and, if we don’t have the urgency we need in that game, we won’t earn the right to keep playing, plain and simple. We have to wrap our arms around the reality of that.”

For the Penguins, the victory – without forwards Crosby and Conor Sheary (also concussed last game in a collision with Hornqvist), defenseman Kris Letang and goalie Matt Murray – was an emotional one.

“I think it was all will; there was not much skill out there,” Hornqvist said. “We worked really hard. It’s not a perfect game from our side, but our compete was really high.”

“It means everything,” Kunitz said. “[Crosby’s] our leader; he’s the face of the organization. When a guy like that goes down, everybody wants to do it for him because he puts it on the line every single night for us, and usually carries us to victory with the way he plays. So, if we can get out there and try to win one for Sid, that’s how we did it tonight.”