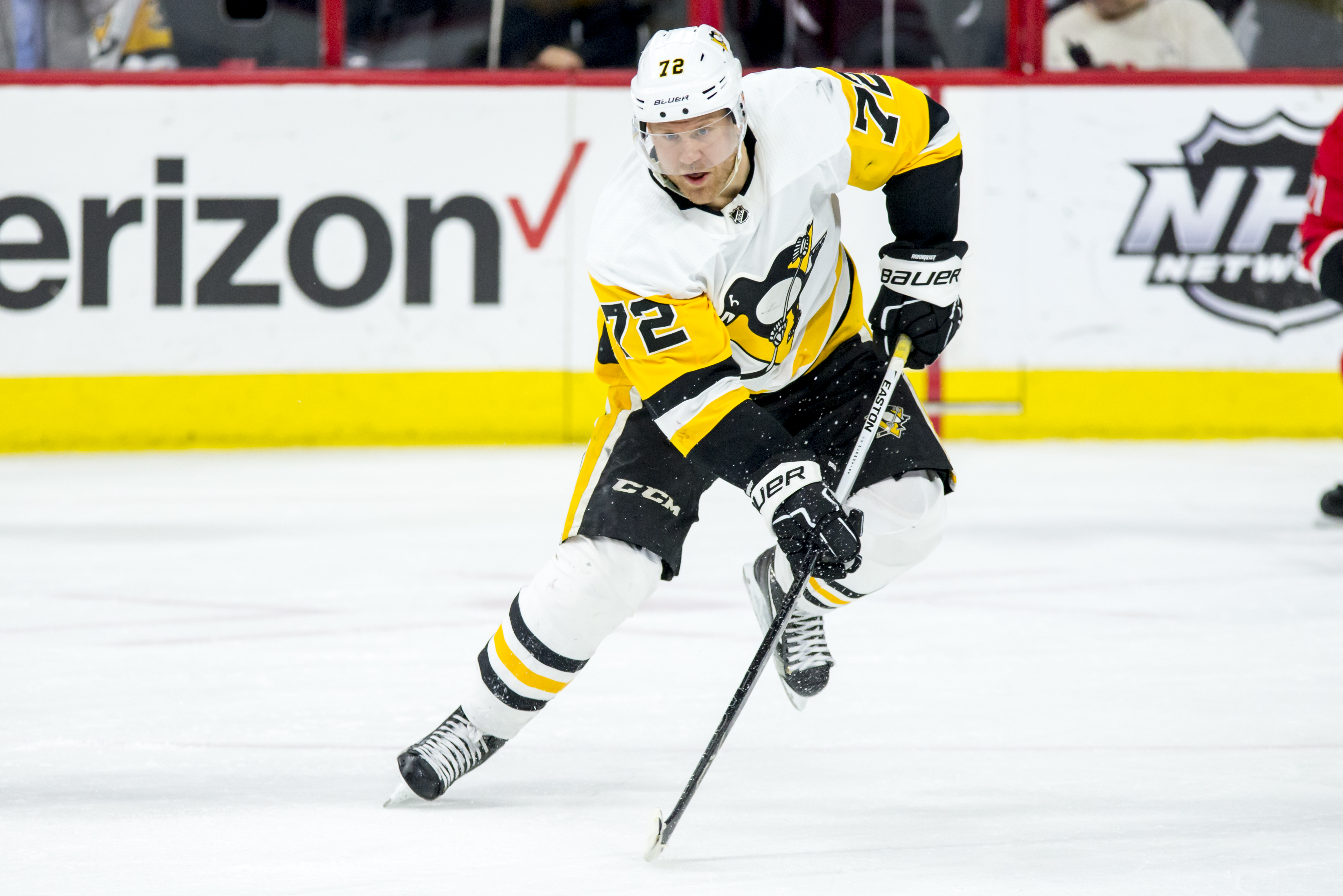 PATRIC HORNQVIST skates up ice after completing a pass during a game between the Pittsburgh Penguins and the Carolina Hurricanes at PNC Arena (Credit: Spencer Lee).

That second goal, a laser from Washington captain Alex Ovechkin, seemed like it might be lights-out for the Penguins. They’d led the first round with an average of 4.43 goals per game, but were held scoreless for the first 42:58 of Game 1 against the Capitals. Their chances were clanking off posts, being blocked by Caps defenders or meeting a brick wall in Washington netminder Braden Holtby.

“We had some real high-quality chances; we didn’t score,” said head coach Mike Sullivan. “We had a few breakdowns that cost us, and you have to give Washington credit. They have some difference-makers on their side as well. But we felt like we were trying to play the game hard and play the right way.”

“We talked between [periods] and we said, ‘We’re right there,’” said defenseman Kris Letang. “’They don’t go in right now but, at one point, they’re going to go in. We’re only one shot away.’”

That shot came early in the third period, followed by a second, then a third.

The Penguins’ Patric Hornqvist, Sidney Crosby and Jake Guentzel found the back of the net three times in a span of 4:49. Just like that, the Capitals’ 2-0 lead had flipped to a 3-2 deficit.

“There’s no good lead in the NHL anymore,” Letang said. “Teams are so fast; they have so much power up front that they can score quick goals. You just have to stay focused, play the right way and sometimes you get rewarded like this.”

“I thought we did a good job of just shooting and getting bodies to the net,” goaltender Matt Murray said. “That’s how you’ve got to score goals this time of year. Good job of staying resilient, even after they got that early one. I’m just really proud of our resolve and our resilience as a team.”

Pittsburgh’s resilience was tested in the final frame. After a relatively even first two periods, the Caps came hard at the Penguins in the third, outshooting them by an 18-8 margin as they tried to pull even. But the brick wall they encountered was dressed in white.

“It’s hard to win at this time of year if you don’t get a timely save, and Matt gave it to us tonight,” Sullivan said. “I thought he was locked in all night long. He made some big saves for us, especially when they were pressing down the stretch. The last six or seven minutes of the third period, they were pressing pretty hard.

“When you get those types of saves, it’s easy to play with some confidence in front of him.”

The Penguins played with confidence despite missing two important players. Star center Evgeni Malkin, out with a leg injury, participated in Thursday’s practice and might be ready for Game 2. Speedy winger Carl Hagelin, sidelined with an upper-body injury, didn’t make the trip to Washington. Fill-ins Carter Rowney and Dominik Simon acquitted themselves well, with Simon in particular generating chances on a second-line role with Riley Sheahan and Phil Kessel.

“These guys are good players; they’re not easy to replace,” Sullivan said. “But I think we have a next-man-up attitude, and that’s how it has to be. To win championships, it takes more than 12 forwards and six defensemen.

“You’ve got to rely on your depth in games like this, and it’s an opportunity for others to step up and play a more significant role. None of our guys look for excuses; we’re always looking to find ways to win.”

With two days off before Game 2, the Penguins will take Friday as an opportunity to rest, then get back to work Saturday on the parts of their game they can improve. Like the lapses and turnovers that resulted in those two quick-strike Washington goals.

“I’d like to think that we can cut down some of the freebies, the A-plus chances we give them,” Sullivan said. “I think that’s in our control. A little better decision-making and I think we can become harder to play against.”

“It’s one game; we did some good things,” captain Crosby said. “I think any playoff series is just about getting better every game, and that’s a challenge both teams face.”