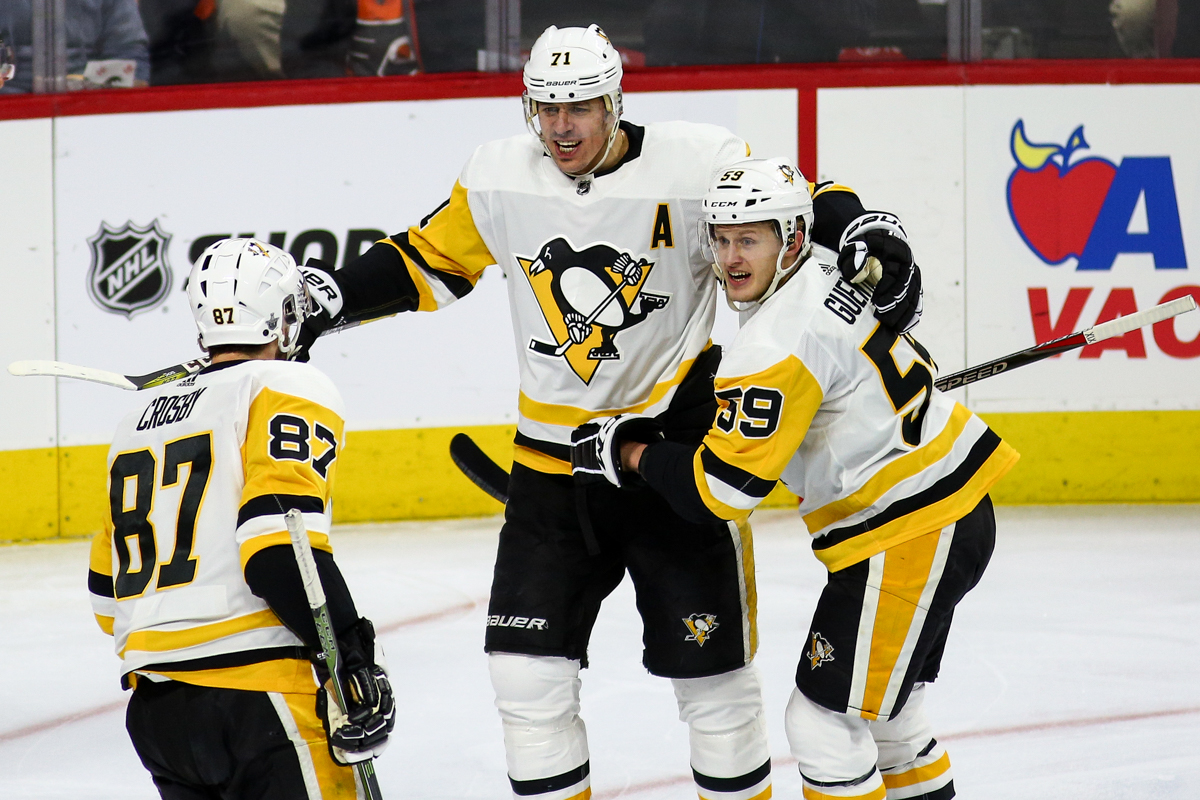 Maybe it was the springy boards.

“You can just tell on the bounces, they’re a lot more lively and springy this year,” said Jake Guentzel, who scored two of the Penguins’ seven goals. “It’s something we’ve been trying to get used to and, obviously, it’s going to take some time. They’re new boards; I think it’s happening around the league. More and more teams are getting these springier ones that give a little more for hits.”

Or maybe it was just as simple as two teams with a whole lot of offensive firepower meeting up and deciding that playing defense would be optional tonight.

In any case, it made for a good time for the 18,627 fans who packed PPG Paints Arena to see the home team face off with the Washington Capitals in the first meaningful action of the 2018-19 campaign – and the first since the Capitals eliminated the Penguins last spring en route to their first Stanley Cup.

As fun the Penguins’ 7-6 overtime win was for the fans, the players enjoyed it just as much.

“Playing the team that you lost to – it’s always a big game to start the season but, against them, it’s probably a little bit more,” Crosby said.

“You wait all summer for this and, the longer your summer, you get more excited coming out,” Guentzel said. “And if you can come out and bang-bang, get your confidence going, hopefully it’ll be able to continue.”

Also noteworthy from that perspective was defenseman Kris Letang, looking much like his old self after a full summer of training, his neck surgery becoming a more distant memory. He also scored two, including the overtime winner.

“I thought he had a really solid night,” said head coach Mike Sullivan. “Obviously he scores a couple of goals but it was more than that; I thought he defended really well. He plays big minutes for us and he played in all the key situations. I’m happy for him because I know how hard he works; I think it’ll be a big boost of confidence for him moving forward.”

“I think we wanted to respond to our last season; I don’t think it mattered if it was [Washington] or another team,” Letang said. “I think the correct way to do it in front of our fans was to start on the right foot, and we showed up and we did a bunch of good things.”

Allowing six goals on 36 shots doesn’t necessarily qualify as a good thing, especially when Pittsburgh held a 6-4 lead early in the third period. But, for game one of 82, the Penguins were willing to cut themselves some slack.

“You’ve got the butterflies before the game; you’re holding the stick tight,” Letang said. “We had them on the ropes and we let it slip. I don’t think we’re really happy about the overall performance; there were ups and downs. But it’s the first one. We’re going to learn and get better.”

One place the Penguins might want to start is turnovers. They were charged with 16 on Thursday, and the Capitals exploited many of them for quality chances.

“Just puck management,” Crosby said. “The mistakes are higher. It’s not preseason, it’s not a controlled scrimmage; it’s regular season and playing a team that feeds off of those turnovers. It’s a good game to learn from, especially with that team, and we’ll continue to get better.”

For the first game of a new season, though, getting two goals each from Letang and Guentzel – Jamie Oleksiak, Derick Brassard and Evgeni Malkin contributed the others – wasn’t a bad way to start.

“The first game is always special for the players, and we know as a team that we can score some goals,” Brassard said. “Our play without the puck is going to have to be better; we can’t play those run-and-gun games every night. Tonight it worked out.”