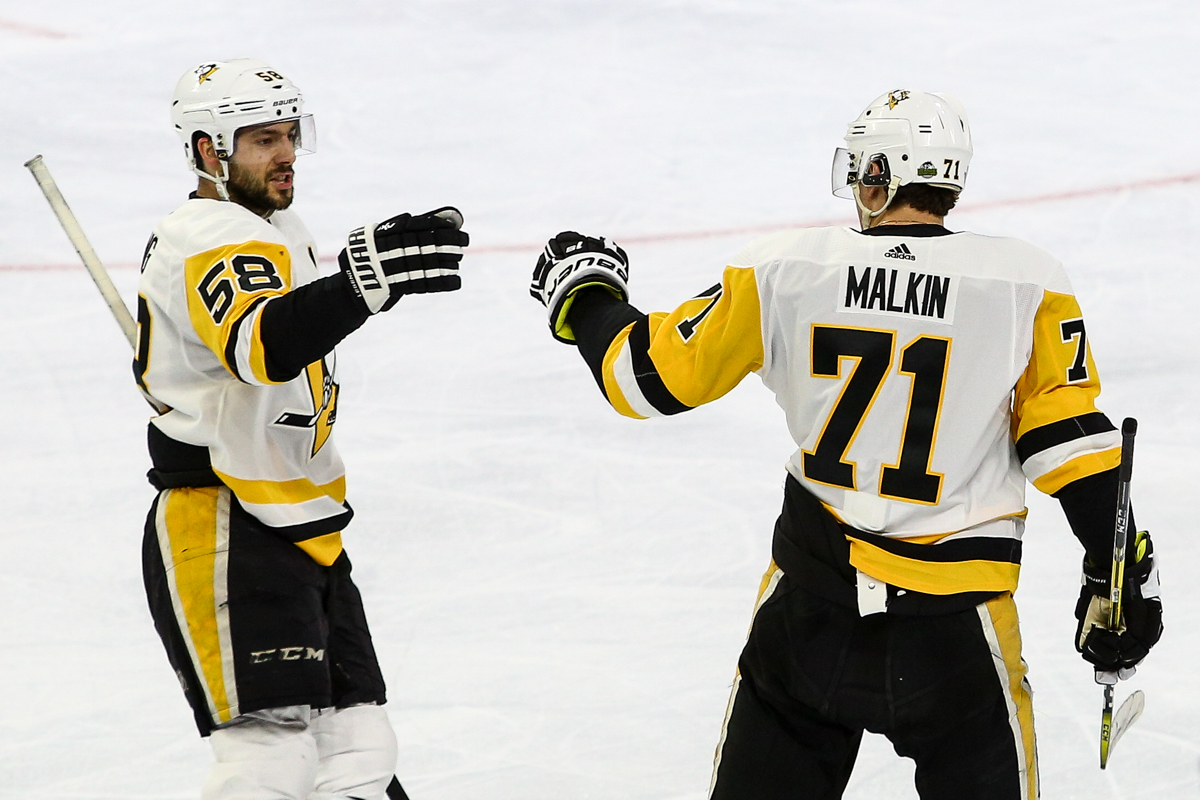 Penguins ‘Need to Help Each Other’ Out of Six-Game Skid

The last time the Pittsburgh Penguins won a hockey game – Feb. 18, when they beat the Toronto Maple Leafs in convincing fashion, 5-2 – it lifted them to the top of the Metro Division.

Eleven days later, after a lifeless, 5-0 loss at San Jose sealed their first six-game losing streak since 2011-12, the Penguins and their 80 points sit in third place. They’ve been passed not only by their archrival Washington Capitals (84 points) but the Philadelphia Flyers (83), too.

Perhaps more concerning is that Pittsburgh is now closer to the bottom than the top of the Eastern Conference playoff picture. The Columbus Blue Jackets, the last team in a wild card spot, sit just two behind the Penguins with 78 points.

After a four-game road trip that included losses to the bottom three teams in the West, the Penguins head home for three of their next four. The change of scenery and fan support should help a team that, by Saturday against the Sharks, was so mired in the slump that they looked defeated long before the final buzzer.

It was hard to watch from the same hardworking group that’s overcome injury after injury, competed hard and consistently, and authored frequent, multi-goal comebacks.

“Well, as you can only imagine, [confidence] is not at its all-time high,” said head coach Mike Sullivan. “When you go through struggles like this – these guys care. And when it doesn’t go the right way out there, I think it can look worse than it actually is.

“The nice thing about confidence is, you can get it back as quickly as you lose it. It starts with one shift, and then you’ve got to build on it. We just have to make sure we once again pick ourselves up, go back to work when we go back home, and have the right attitude for the next opportunity we get.”

From captain Sidney Crosby’s perspective, the Penguins aren’t executing when it matters most.

“There’s always key times in the game you look at, whether it’s a power play, penalty kill, just big plays that we have to come up with,” Crosby said. “That’s usually the difference between winning and losing, and we haven’t done enough of that consistently.”

Alternate captain Evgeni Malkin, who often speaks bluntly during his team’s rough stretches, said they’ve gotten away from the kind of hard work that led to success.

“We haven’t played great, but we have time. Eighteen games left; it’s a good time to change and fix our problem. We have confidence for sure; we have good players here. We need to help each other. We need to forget this road trip, [get] back to home, play in our building. And try to shoot puck more. Go to net. We need to play simple.”

Simplifying would be a start. The Penguins’ offense evaporated as they were outscored 24-8 during the six-game slide. It didn’t help that they were always chasing the game, giving up the first goal on every occasion.

There’s also the possibility that those injuries have finally caught up with them. Without top-four defensemen Brian Dumoulin and John Marino, others have taken on increased roles and workloads, and weaknesses have been exposed. Pittsburgh has also struggled to establish a solid bottom-six forward rotation and could use a third-line center in Nick Bjugstad, who’s still recovering from core muscle surgery.

The good news is that all three of those players joined the Penguins on the road trip, skating, joining practices and getting closer to their returns. They’ve also added the reinforcements GM Jim Rutherford acquired at the trade deadline: respected veteran Patrick Marleau from San Jose, who at age 40 was one of the most noticeable Penguins on the ice when he skated alongside Malkin Saturday, and Conor Sheary and Evan Rodrigues from Buffalo.

Rodrigues, 26, has seen a few losing streaks during his years with the Sabres and agrees that the Penguins need to simplify their game to bust out of the slump.

“I think it’s attention to detail; doing the little things right,” he said. “When you get into a losing streak like this, you hold onto your stick a little bit tighter. We’ve missed a few empty nets in the past couple games that you don’t see happen very often. When you’re in something like this, you’ve just got to do the little things right, focus on the defensive side of the puck and let the offense come to you. Sometimes you need a greasy one, a rebound or a deflection.”

They’ll get their next chance Tuesday against Ottawa, another team near the bottom of its conference. It’s a big opportunity to start March, and the stretch run to the playoffs, on the right foot.

“Now it’s like the playoffs start for us,” Malkin said. “Every game is huge for us.”

“It’s my responsibility to try to get this team playing to its capabilities,” Sullivan said. “We know we’re a good team when we’re playing the right way. I believe in the group of players we have, I know we’re a better team than what we showed, and we’ve got to find a way to work together to make that happen.”