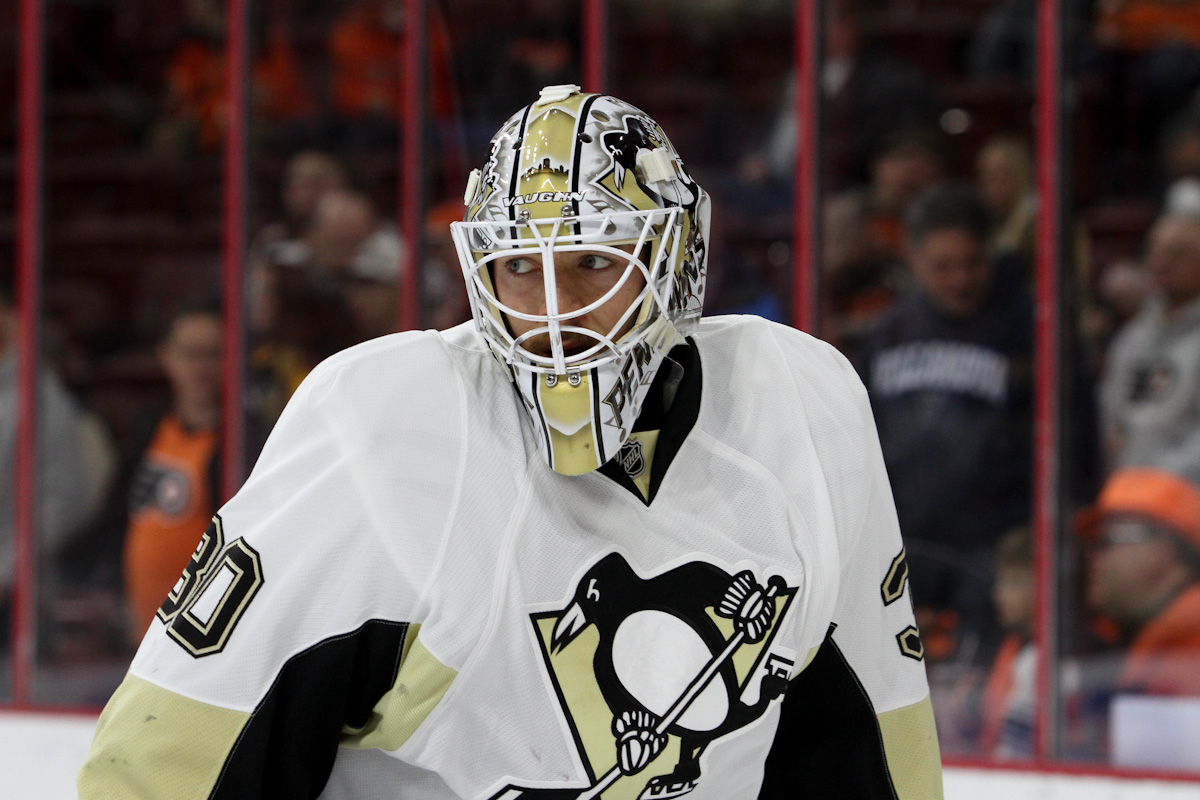 Game 1 was 28-year-old Jeff Zatkoff’s chance to start – and shine – in his first career playoff game, a 5-2 Penguins win. The club’s No. 3 goalie was solid enough in their 4-2, Game 2 loss but, as long as starter Marc-Andre Fleury continued to be sidelined with a concussion, the net was always going to belong to rookie netminder Matt Murray if he was first to recover from an apparent concussion of his own.

Tuesday, with just one full practice under his belt since being cleared to return, the 21-year-old led the Penguins onto the ice for Game 3. A few hours later, he had led them to a 3-1 win to take a 2-1 series lead and reclaim their home-ice advantage.

It wasn’t lost on Murray that he was the youngest goaltender to ever start a playoff game for the Penguins. Or that his first NHL playoff game came under the bright lights of Broadway, not to mention the iconic Madison Square Garden ceiling. Or that the goalie matchup looked like a mismatch on paper, with his Rangers counterpart, a past Vezina winner who will go down as one of the best to ever play the game, making his 114th career playoff start.

“Can’t compare it,” Murray said. “Especially at this arena, being in the NHL, playing in the playoffs. I’ve never experienced anything like that.”

The Penguins limited Murray’s work to 17 shots, and the only one that beat him was a wicked wrister from Rick Nash on a shorthanded breakaway, just 39 seconds into the second period.

“They made my job easy,” Murray said. “Seventeen shots is not a whole lot, and a lot of it was perimeter, a lot of blocks, a lot of good box-outs.”

“I thought our team did a better job off the start of controlling territory,” said head coach Mike Sullivan. “I thought our breakouts were better, we tried to simplify the process there a little bit, and I thought we spent more time in the offensive zone, which limits their opportunity to get pucks to the net.”

Still, the kid came up big when it counted, and the trademark composure that belies his age gave his teammates confidence, too.

“Honestly, I tried to play it like any other hockey game,” Murray said. “I may be young but I’ve played this game thousands of times. It may be higher stakes but it’s still hockey, so I was trying not to put too much pressure on myself, trying to go out there and have fun and enjoy the moment.”

“He’s been good since the first day he stepped into the net,” said forward Matt Cullen. “It’s been impressive to watch him work, and the calm, poise and confidence he displays in there really rubs off on our team. It was huge tonight.”

Also huge, and on the opposite end of the age and experience spectrum, was Cullen. The 39-year-old veteran beat defensemen Keith Yandle and Dan Boyle, then went five-hole on goalie Henrik Lundqvist 4:16 into the third period, putting the Penguins ahead for good.

Pittsburgh had tied Nash’s marker in the last minute of the second on a pretty pass and tip from Phil Kessel and Sidney Crosby. Crosby’s former teammate Colby Armstrong tweeted that the goal was tough because Crosby couldn’t see the puck, but had to have the touch on a blind play. As it turned out, he was exactly right.

“I didn’t see it,” Crosby said. “It was a great pass; I didn’t think he could get it through. Just had my stick on the ice [and] it found a way to hit my stick.”

Cullen’s game-winner came nine years and a day after his last one in the playoffs, when he was playing for the Rangers against the Atlanta Thrashers.

“He’s a player, eh?” said Kessel. “You watch him out there and he can play for a lot more years. He skates well, he’s smart, you can put him in every situation. He’s just a great player.”

The only other tallies were an empty-netter from Penguins defenseman Kris Letang and, importantly, a disallowed goal by New York’s Chris Kreider that would have opened the scoring midway through the first but was ruled offside after a coach’s challenge from Sullivan.

That came early into a four-minute penalty kill for Pittsburgh and, with the overturned goal followed by a solid kill, the Penguins could feel the momentum beginning to turn.

“Those are big deals,” Cullen said. “I thought we managed to kill the rest of that penalty off and go from there. Such a big swing in momentum; you take a deep breath.”

Now the Penguins can do the same, knowing they have a chance to come back to Pittsburgh up 3-1 or, at worst, tied 2-2. They can also rest in the accomplishment of getting closer to the speed and skill game that helped them finish the season on a 14-2 run, but was largely missing in this series so far.

“We weren’t very happy at all with our effort last game,” Cullen said. “We felt like it was important to try to get home ice back. Most importantly, you want to have your best game. We didn’t have it in Game 2 and I don’t think we had it in Game 1.

“We got a little bit closer to it tonight; we played the way we wanted to. We have a lot of room for improvement, but we’re moving in the right direction and we’re happy with the result.”

And, although Zatkoff filled in admirably, the Penguins can proceed with their best goaltending option in lieu of Fleury, now with the benefit of one whole playoff game to his credit.

Not that Murray was ever going to allow himself to be flustered, of course.

“I wouldn’t say it’s hard to stay composed, no,” he said. “It’s a moment I’ve been visualizing and dreaming about for a long time. A big focus of mine was not to get too far ahead of myself. Really just be in the moment, not think about all the noise that’s going on around the game and focus on the task at hand.”