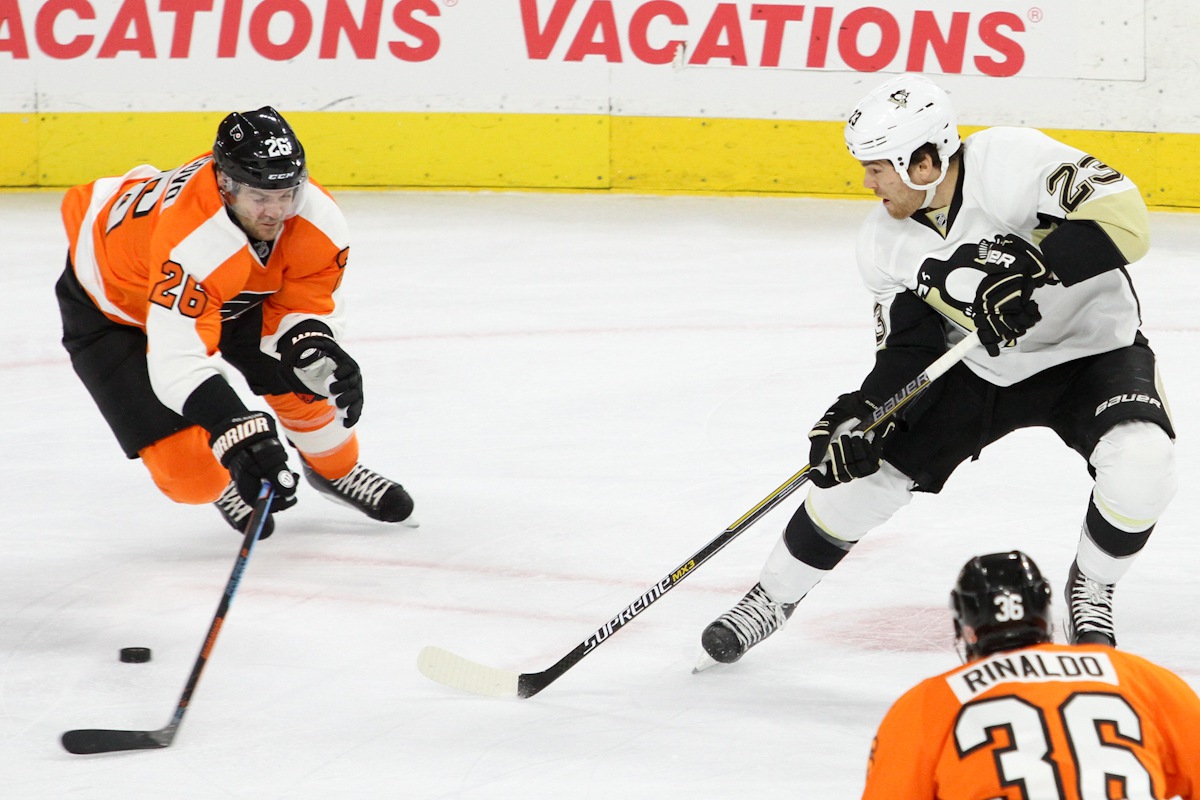 After closing a 2-1-1 swing through the western U.S. with reason for optimism, the Penguins returned for a three-game homestand at CONSOL Energy Center that left cause for concern.

Thursday, Pittsburgh came out as it was supposed to against the low-ranked Edmonton Oilers. The Penguins avoided the kind of sluggish start that can often accompany a return from an extended trip across time zones, starting the scoring early on a shorthanded goal and building a 4-0 lead by the 1:01 mark of the second period.

Then, the wheels nearly fell off. Edmonton scored four unanswered goals, and it took the Penguins a pair of tallies in the game’s last five-plus minutes to salvage a 6-4 win from what had the potential to be an embarrassing defeat.

Hosting the Boston Bruins Saturday afternoon, Pittsburgh saw Sidney Crosby become a late scratch after warmups due to what head coach Mike Johnston would later call “not feeling well.” There was a scramble to replace the captain’s spot in the lineup with planned scratch Craig Adams, and the Penguins would need that extra body as their other star center, Evgeni Malkin, was injured on his first shift of the game and is expected to miss one to two weeks.

Without Crosby and Malkin, the Penguins’ shuffled line combinations struggled to generate offense. Bruins goaltender Tuuka Rask stopped all 30 shots he faced and Milan Lucic’s goal midway through the first was the difference as Boston shut out Pittsburgh, 2-0; the other goal, an empty-netter by Zdeno Chara, just served to pad the score.

There wasn’t much time to dwell on that loss, though, with a matchup with the Detroit Red Wings less than 24 hours later. The Penguins got Crosby back for that one, but Detroit got on the board just over a minute into the contest and never looked back, staking a 5-0 lead before Pittsburgh’s David Perron broke goalie Petr Mrazek’s shutout bid midway through the third.

The Penguins lost the game, 5-1. They lost winger Patric Hornqvist, their best player of late with 12 points (8G, 4A) in his last 11 games, to an unspecified injury that will sideline him for about a week. But perhaps most concerning is how quickly and easily they lost their composure.

Pittsburgh’s 64 penalty minutes Sunday – which included five, 10-minute misconducts to forwards Steve Downie and Chris Kunitz and defenseman Kris Letang – gave the club the dubious distinction of being the league’s most penalized this season.

Despite a radical overhaul to the front office, coaching staff and roster since last summer, there’s been a book on the Penguins for the past several seasons, perhaps beginning with their 2012, first-round playoff loss to the Philadelphia Flyers: get into their heads, get them off their game, get them to lose their discipline and exploit the advantage. And this year’s team is doing little to erase that perception.

It’s easy to point to a player like Downie, who leads the NHL in penalty minutes, and Johnston did so after the loss to the Red Wings.

“I met with him before the game tonight and I told him, we just can’t have that. And that is a concern, for sure. Downie has to play without taking minor penalties, especially obstruction penalties. If you take a penalty where you initiate through physical play, we can accept that; he knows that. And, when he does take a penalty or something bad happens in a game, he just can’t let it go further. I thought he came out of the box, had a couple really good shifts for us – that’s what he has to do – and then he goes back and takes a 10.”

But the problem runs throughout the team, and Johnston didn’t hesitate to say that, too.

“It’s uncharacteristic of guys like Kunitz and Letang to do that. I’m not sure of the history with the officials, if there was something there from previous years that’s built up … but, certainly, I thought our guys got on edge way too quick in the game, and penalties and 10-minute misconducts killed us tonight. We’re trying to get some momentum back into a hockey game and you just can’t do that. And it can’t be your leaders – and, really, it’s the discipline throughout the team.”

At an unplanned but optional practice Monday, Letang took the opportunity to get in some extra work after being ejected Sunday – “I didn’t skate for too long,” he said – and accepted responsibility for his actions.

“I should not put the team in that situation, especially down a forward already. Obviously it’s an emotional game and you’re down 4-0, you’re frustrated, and I shouldn’t have let my emotions come out. I need to learn from it.”

Letang went so far as to admit the Penguins may have earned a reputation with officials that isn’t going to get them the benefit of the doubt.

“For years, and we’re not afraid of saying it, we’ve been all over the referees yelling and complaining. I think we’ve made strides this year, but it’s not perfect yet. They’re not going to take your side if you give them a hard time. So, we need to get better at that.”

“The referees talk to each other, and you don’t want to have the reputation of being a team that complains, that whines, that does those types of things,” Johnston said. “I don’t believe that we have, but I’ve seen some signs over the course of the year that I don’t like, and we have to address them.”

They can start Tuesday in New Jersey, where the Devils are exactly the type of team that could push Pittsburgh’s buttons.

“You try to stay with the plan, you play in your own system, try to play your game. Don’t try to force it,” Letang said. “We have to control what we can control.”