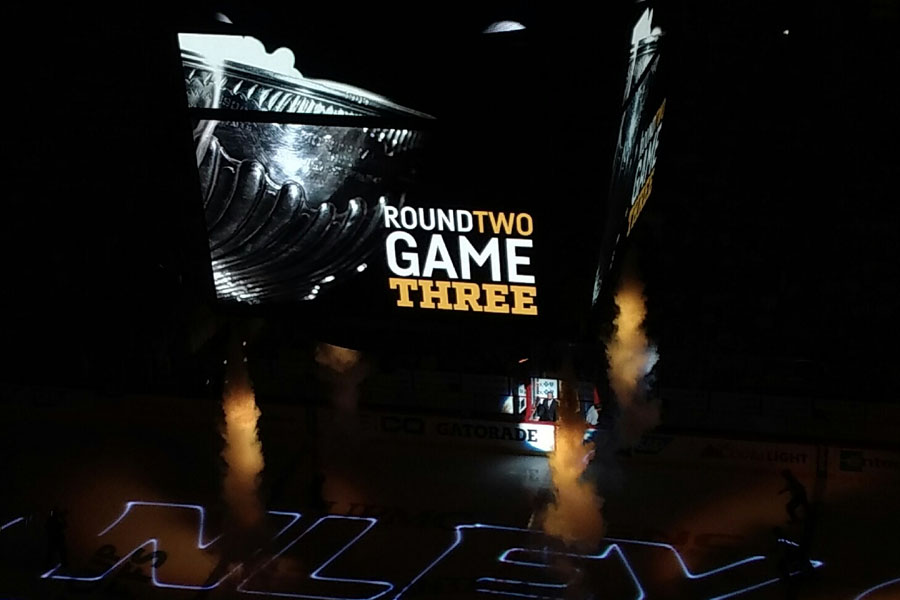 Penguins Lose Crosby as Caps Get Back into Series

Just 5:24 into Game 3, with Sidney Crosby headed to the net for a close-range chance on goalie Braden Holtby, Washington captain Alex Ovechkin took a few whacks at the Penguins captain with his stick. The last one connected with Crosby’s head while the pair’s skates also tangled. Crosby fell awkwardly, his leg buckling under him, as former teammate Matt Niskanen simultaneously came in with a cross-check, making head contact.

All the enthusiasm of a second-round playoff game against one of the home team’s fiercest rivals drained from PPG Paints Arena as fans went silent, watching Crosby lay on the ice in pain. He was eventually able to skate off, with assistance, but did not return.

“I never saw the hit; just saw him laying there and it was tough to see,” said defenseman Justin Schultz. “Our best player, the best player in the world.”

The Penguins couldn’t take advantage of a five-minute penalty to Niskanen, who also got a game misconduct, and negated part of it with a penalty of their own. At 13:05 of the first, though, the Capitals’ high-powered power play struck on a Penguins delay of game penalty.

That goal, from forward Nicklas Backstrom, held up for the majority of the game. An apparent second-period goal from the Penguins’ Chris Kunitz was disallowed for goaltender interference, and the Penguins, despite playing the Capitals evenly for most of the contest, just couldn’t get on the board.

When Washington’s Evgeny Kuznetsov tallied another midway through the third period to make it 2-0, it looked like game over for the Penguins. Then, with goaltender Marc-Andre Fleury pulled for a 6-on-5 advantage, Pittsburgh’s other star center, Evgeni Malkin, came through, getting his club on the board with less than two minutes remaining.

With Fleury still pulled, Malkin set up Schultz for his first career playoff goal just 48 seconds later to tie the score at 2-2. In less than a minute, the Penguins had negated the offense it took the Capitals all night to build.

“It looked like a bunch of fans already left,” Schultz said. “We only had a minute left there. It just shows what this group has.”

As the teams headed to overtime, Pittsburgh seemed to have the momentum squarely on their side. But the miracle comeback was not to be.

With Penguins defenseman Trevor Daley in the box for holding, the Washington power play came through again as fellow blueliner Kevin Shattenkirk, the Capitals’ big-splash acquisition at the trade deadline, scored the game winner just 3:13 into the extra frame with assists from Kuznetsov and Backstrom.

“I just said, it’s another test for us,” said Capitals head coach Barry Trotz. “You’ve just got to park it, and we’ve been really good at parking stuff. And in the overtime, we went for it. The two 6-on-5 goals, we’d have liked to have gotten through that, but we didn’t. So, regroup and do it in overtime. Good response by our group.”

Just like that, the Penguins went from the possibility of a 3-0 series lead to letting the Capitals right back into the series. They’ll have the chance to pull even in Wednesday’s Game 4, also in Pittsburgh.

The talk after the game was of resilience – for the Capitals, who came back to win in overtime after their lead evaporated, and for the Penguins, who never gave up despite a two-goal deficit in the waning minutes.

But there was also plenty of talk about Crosby and the sequence of events that led to his injury.

“Sid’s coming across and [Holtby] throws his stick out there,” Trotz said. “[Crosby] sort of gets split, and he’s coming down. And Nisky has to go to the back post because that’s where the puck’s going. He just sort of ran into him. Unfortunately, Sid got injured there. It’s just hockey; it’s a hockey play.”

Sullivan wasn’t having it.

“I’d rather not share my opinion on it,” the Penguins coach said. “At the end of the day, it really doesn’t matter what either coach’s opinion is. The players are going to play, the coaches are going to do what we do and the officials do what they do.”

Postgame reports sounded promising for Pittsburgh’s injured players – forward Conor Sheary, who collided with his own teammate early in the second period, and Crosby, both of whom were seen in the building with no visible signs of injury.

Crosby just walked by me in the arena. Full suit. Winked at a worker and appeared to say "i"m ok." Walking briskly. No sign of a limp.

If Crosby’s injury does keep him out of the lineup, however, the Penguins can draw on their extensive experience in playing through major injuries.

“We’re hopeful that won’t be the case,” Sullivan said. “But I think this group has so much character and talent that we’re able to endure the injuries that we have. We’ve done it all year long. We did it again tonight, and we’ll continue to do it.

“These are great character guys. They never look for an excuse; they always have a high expectation of themselves and, fortunately, we’ve got depth in our organization. These guys step in and they help this team win.”

“Hopefully Sid’s back, but we showed for parts of 50 minutes that we can play them without Sid,” forward Nick Bonino said. “Obviously we want him there but, if he’s not and that’s the reality, we have to find ways to win. We almost did tonight.”