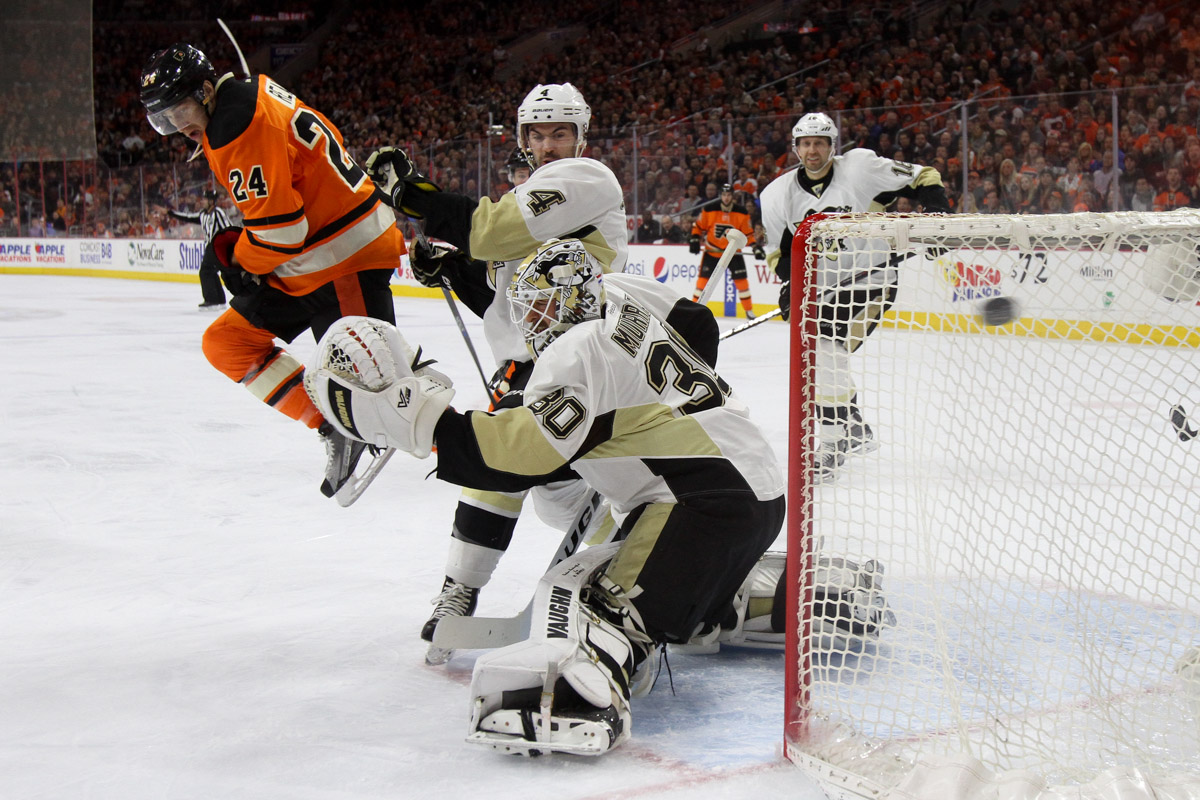 Sidney Crosby and, especially, Kris Letang have logged big minutes in leading the Penguins’ second-half comeback. So, after the club clinched second place in the Metro division with a win at Washington Thursday, head coach Mike Sullivan gave his captain and best defenseman the day off Saturday in their regular-season finale at Philadelphia.

Sullivan couldn’t be blamed if he also factored in how physical, often crossing the line into ugly, the Penguins-Flyers rivalry can become and wanted to keep two of his most important players healthy for the playoffs. That’s why it was a little surprising that he didn’t opt to rest Matt Murray, the 21-year-old backup netminder who’s carrying the Penguins’ postseason aspirations squarely on his tall, lanky frame as starter Marc-Andre Fleury recovers from his second concussion in a matter of months.

With the Penguins up 1-0 and 2:36 remaining in the first period, the worst-case scenario played out. The Flyers’ Brayden Schenn drove to the net on a scoring chance, bowled over Murray’s head and knocked off his helmet. Murray clutched his head as he sat on the ice, then left the contest as third-string goalie Jeff Zatkoff came in.

After letting up a quick goal to Philly’s Wayne Simmonds to tie the game, Zatkoff settled in admirably, giving up a total of two goals on 24 shots. The Penguins couldn’t find any more offense to help him, however, and an empty-net goal gave the Flyers a 3-1 win – and punched their ticket to the postseason.

For the Penguins, the final score was insignificant. But Murray’s injury could be hugely important to a team that went 14-2 to end the season and has plenty of reason to believe they could contend for the Stanley Cup.

“He’ll get reevaluated in Pittsburgh,” said Sullivan, whose team has a scheduled day off Sunday. “We’ll probably have an update Monday.”

Asked if Murray had undergone concussion protocol, Sullivan declined to respond. “As I said, he’ll be reevaluated by our doctors when we get back there.”

Murray has now played 13 NHL games, going 9-2-1 with a .930 save percentage and 2.20 goals-against average. After filling in during Fleury’s first concussion in December, when he split duties with Zatkoff and went 2-1-1, he rose up the depth chart to steal the No. 2 spot when he was recalled after the NHL trade deadline. Murray had won seven consecutive contests going into Saturday’s no-decision, with his last loss coming in a 3-2, 34-save performance at Washington March 1.

Zatkoff hadn’t played since Feb. 20, in a 4-2 loss to the Tampa Bay Lightning. Now, depending on the health of Fleury and Murray, there’s a chance the 28-year-old could be the Penguins’ starting goaltender when they open their first-round series against either the New York Rangers or Islanders next week.

“I thought Zak did a terrific job,” Sullivan said. “That’s not an easy thing to do, come in cold like that, especially where he hasn’t played in a little while. I thought he made some big saves for us, especially when we were on the penalty kill.”

“I’ve been working hard with [goalie coach Mike] Bales, in practice and with goalie drills, and just tried to carry it over into the game,” Zatkoff said, but that didn’t mean his nerves weren’t on edge when Murray had to exit.

“I’d be lying if [I said] there wasn’t. You haven’t played in a month and a half and, especially in that situation, it’s tough. You obviously want to play, but you never want to play under those circumstances.

“I just tried to play my game and draw on my past experiences. I’m confident in myself; I know I can play in this league and be successful, and I just wanted to give the team a chance to win. At the end of the day, I thought I settled in, and we were one shot away. That’s a desperate team over there, and for the guys to come in and play the way in front of me they did today, not much on the line, it says a lot about the character in this room.”

Sullivan has shaped the Penguins’ collective character and identity, but Saturday, for perhaps the first time since taking the reins as head coach, he faced heavy criticism for his decision to start Murray while resting other key players. Ironically, he said, the goal was to keep the young netminder rounding into playoff form.

“Certainly we regret that he got hurt,” Sullivan said, “and, when you play hockey, you’re always going to run that risk. We felt like we made the best decisions for our hockey team that were going to put us in a position moving forward.

“The coaching staff felt that this was a good opportunity for Matt to gain a level of experience in a high-stakes environment, and that was one of the reasons why we felt it was worthwhile to put him in goal. He’s backed up since he’s been [called] up, so he hasn’t had a ton of opportunity to play in games. We felt another game under his belt would be good for him and serve him well in the playoffs.”

Sullivan said Thursday that Fleury is “making significant progress, so we’re certainly encouraged by that,” and called him day-to-day. Still, with the unpredictable nature of head injuries, what felt like a special season for the Penguins, with limitless promise and potential on the horizon, now has the feel of being on hold, pending the health of their top two goalies.

And if neither is ready to open the playoffs next week, well, Sullivan says they’re ready to work with what they have.

“We have a plan that we’ll put in place,” he said. “We’ll go to practice, and we’ll prepare our guys for our first-round opponent.”