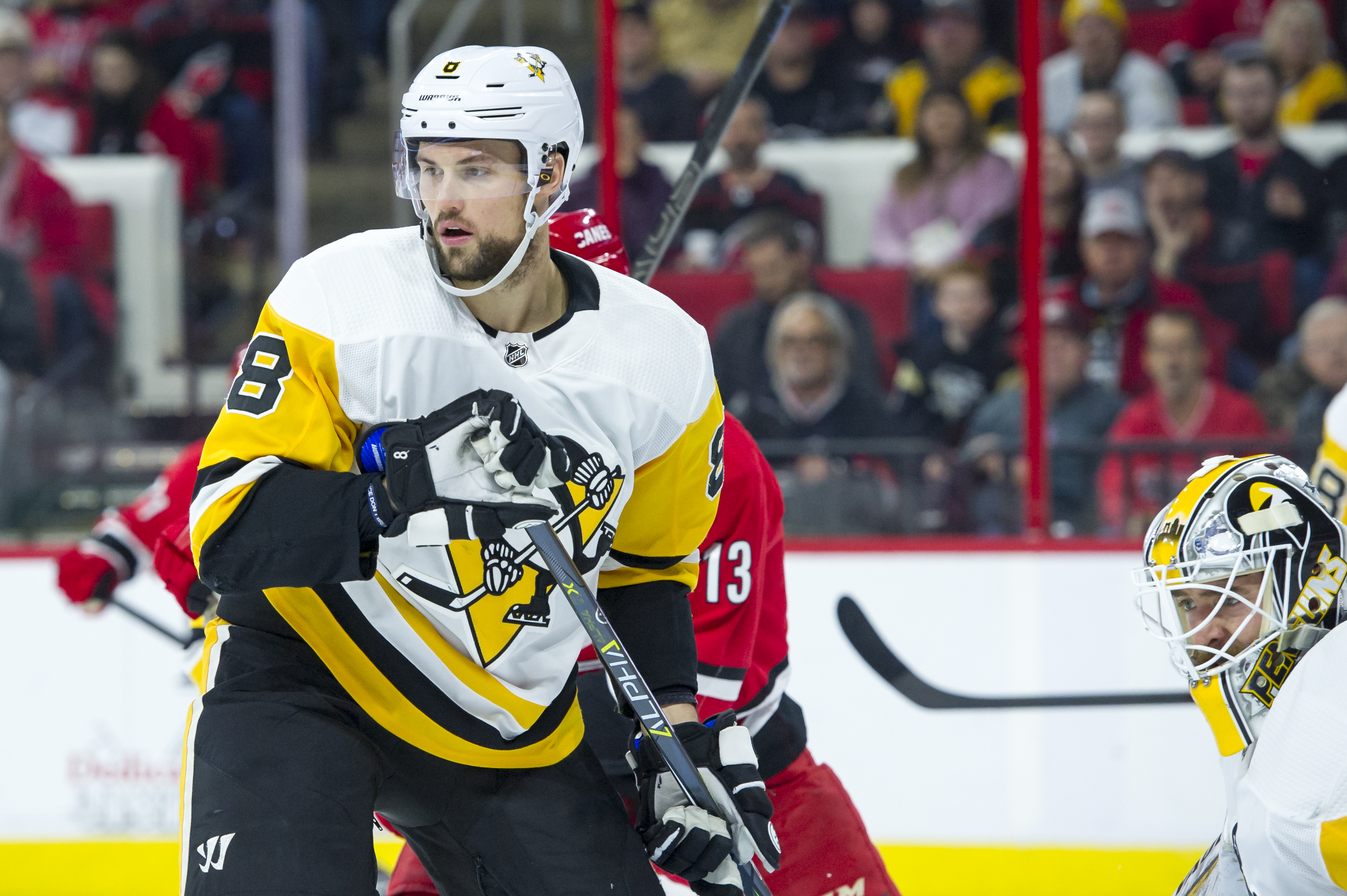 Saturday, the Carolina Hurricanes shut out the Dallas Stars, 3-0, for their eighth win in their past 10 games. When they did the limbo as their postgame “Storm Surge” celebration, however, it was instead the Pittsburgh Penguins, Carolina’s Metro Division rival, who found out how low they could go.

After Pittsburgh’s comeback bid against the Calgary Flames fell just short with a 5-4 loss Saturday afternoon, they were one Canes win from being on the outside looking in on the playoff picture for the first time in months. By the end of the night, that’s exactly what happened.

We set the bar tonight ? pic.twitter.com/dDJMsmcQlw

The slide was short-lived, as the Penguins topped the New York Rangers Sunday afternoon, 6-5, in a fun, defense-optional contest. That put Pittsburgh back in the second Wild Card spot in the East with 69 points – just behind the Montreal Canadiens, also at 69 points but with a game in hand, and one ahead of Carolina’s 68.

Ahead of Pittsburgh in the Metro, the Columbus Blue Jackets also have 69 points with two games in hand, while the Washington Capitals are just two points ahead at 71. Behind them in the Wild Card chase, the Buffalo Sabres and Philadelphia Flyers remain in the hunt with 63 points apiece.

The Penguins are just past the time they’ve started to heat up in recent seasons, and inconsistency has remained a problem from game to game – and often within a game. This might be a year they’re faced with the prospect of fighting for a playoff spot until the bitter end.

“That’s how it’s going to be, and we know that,” said defenseman Brian Dumoulin. “Everything’s really, really tight right now and there’s a lot of teams that are fighting for playoff spots. We know that every point matters, and it’s going to make us better in the long run.

“If we keep chipping away and getting points in these games and really bearing down and playing well, it’ll be beneficial when we get to playoff time. We’ve got to just embrace the race here and keep trying to get points.”

You can chalk some of that up to parity, especially in the very tight Metro, where teams like the New York Islanders, Hurricanes and Flyers have doing a lot of winning recently.

“I think it has to be [a battle],” said goalie Casey DeSmith. “Every team’s good nowadays; you don’t have any off nights. It’s going to be tough to put together a really substantial streak. But if we can win more than we lose, we’re going to put ourselves in a good spot.”

One of the most important ways for the Penguins to put themselves in a good spot is to get offense from throughout their lineup. Teddy Blueger, promoted from the Wilkes-Barre/Scranton Penguins on Jan. 30, has contributed four points (3G, 1A) this month, and recently acquired Nick Bjugstad (1G, 3A) and Jared McCann (3G) have provided options as head coach Mike Sullivan works to find combinations beyond the consistent production of his top line, featuring Sidney Crosby, Jake Guentzel and Bryan Rust.

To that end, perhaps the most promising outcome from their weekend against the Flames and Rangers was the re-emergence of Evgeni Malkin, who busted out with two, two-goal performances and was a dominant force with nine shot attempts Saturday and 10 Sunday. The star center hadn’t found the back of the net since Jan. 11 at Anaheim, but by Sunday was looking – well, like Evgeni Malkin.

What a goal by Evgeni Malkin…. ? pic.twitter.com/depBqwmky5

“He’s really loud when he wants the puck, which is a good thing,” said Zach Aston-Reese, who slotted in alongside Malkin and Phil Kessel Sunday. “I heard him coming down late and just kind put it in the spot for him, and you guys saw the finish. I’m pretty pumped; when NHL Network is playing top 100 goals this season, I’ll be in the highlight reel now.”

Malkin has long been a player whose confidence builds from his own success. He showed signs of breaking out in a Jan. 30 contest against Tampa, then was set back by injury and a one-game suspension for swinging his stick at the Flyers’ Michael Raffl in his return game in Philadelphia. Now, he looks to have picked up where he left off.

“Long time I not score,” Malkin said after Saturday’s game. “Hopefully these two goals give me more confidence, and I feel so much better for sure.”

“It’s huge,” said defenseman Kris Letang, who also contributed two goals against the Rangers. “[Along with Crosby], you’ve got two waves of top-five centermen in the league that go back-to-back, so it’s tough to match up and gives momentum to our team and creates scoring chances.”

“He’s such a dominant player when he’s on top of his game; he’s so impactful,” Sullivan said after the Rangers game. “It can’t help but make your bench six inches taller. The more players we have on our bench playing well, it helps us get the swagger we need to be at our best – and, when our best players are playing well, that helps that much more.

“We’re really encouraged with where Geno’s game is trending. He’s had a couple of real strong games here, and he tends to be a guy [who] builds confidence when he scores. I think that bodes well for him and for us. He’s an elite player; it’s hard to explain the impact he can have on a game when he’s at his best. He’s one of those guys who can change the outcome of a game in a few shifts, and you could see it in the third period tonight.”

As for the outcome of this Penguins season, they’ll keep working to chip away at the standings and embrace the race.

“We just want to do it the right way,” said Dumoulin. “We all believe in this room, and we all know the talent in this room. I thought we played hard against Calgary and we didn’t get the result. We played hard here tonight and as long as we’re still doing that, controlling our controllables and doing everything we can to try to win the game, then we’ll get points along the way.”

“I believe we have what it takes, and that’s what we told the players,” Sullivan said. “We can’t be afraid of it; we’ve got to get excited about it. We’ve got to embrace this thing. They have so much experience to draw on as far as playing in a high-stakes environment.

“We’ve just got to control what we can, take each game as it comes and do everything we can to win that game right in front of us. And I believe, as as long as we stay in the moment and we stay focused, then we’ll do what it takes to win.”