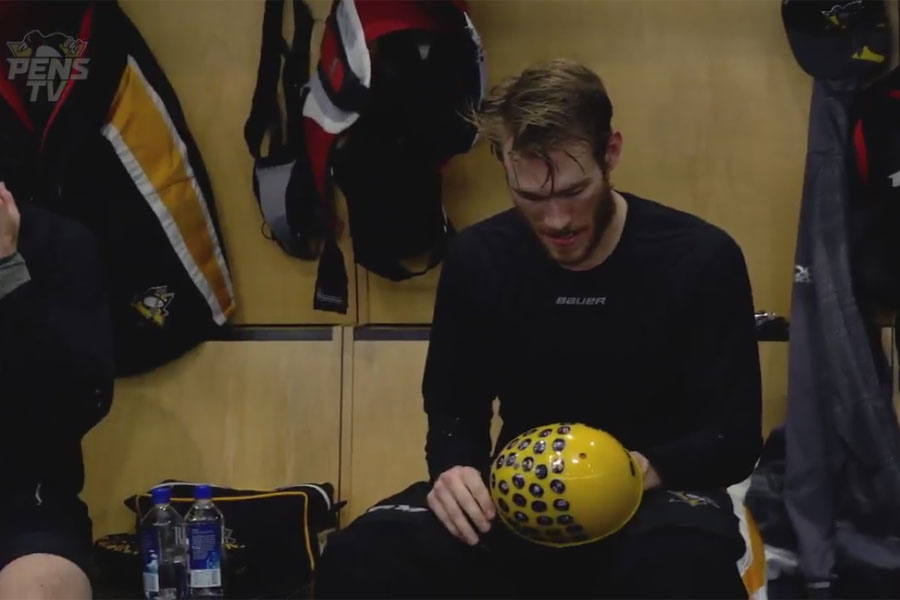 If the Penguins’ 3-2 win in Friday’s Game 4 signaled that they had started to poke some holes in Ottawa’s suffocating system, Game 5 is when the dam flat-out burst.

Seven different Penguins scored Sunday, and 11 recorded a point, in a 7-0 blowout that gave Pittsburgh a 3-2 series lead. It was the largest margin of victory in a Conference Final since May 31, 2002, when the Detroit Red Wings beat the Colorado Avalanche by the same score.

Speaking of dams bursting, Senators head coach Guy Boucher had a few thoughts on how the Senators could be beaten so convincingly in such an important game.

“It’s not about what it means; it’s where the players are,” he said. “Some days they have it. Just like a plumber wakes up one day, is having a great day; the other day, he’s not having a good day. Just one of those bad days.

“It’s not lack of preparation. The guys are giving everything they’ve got. That’s what they had today, and it wasn’t good enough.”

The Penguins, meanwhile, had a lot to give. It started with reconfiguring the lines to bring a balance of speed and physicality to each one. One of their many injured players, Bryan Rust, rejoined the lineup, while a struggling one, Conor Sheary, took a seat. But, most importantly, it came down to the basics – hunger and effort.

“This was one of the more complete efforts, for sure,” said head coach Mike Sullivan. “I thought our guys had a readiness about them tonight that we’re going to need moving forward if we’re going to get to where we want to go.

“When we play the type of game we played tonight, it allows us to dictate the terms out there a little bit and play to the style of play, the identity of this Penguins team.”

That’s easier to do against a hard-defending team like Ottawa when you get on the board first. And the Penguins did that at 8:14, when 22-year-old defenseman Olli Maatta opened the scoring, just as he did in Game 4, with a blast from the left point.

That was the start of a four-goal first period for the Penguins. Boucher pulled goalie Craig Anderson briefly for backup Mike Condon to stall things without having to use a time out, then put his starter back in only to see him allow the fourth goal less than 30 seconds later.

That made for a less-than-celebratory 36th birthday for Anderson, who was replaced by Condon for good to start the second. But Boucher seemed to imply he’d go right back to his starter for Tuesday’s Game 6 in Ottawa. “I know you [have to ask], but you should not,” he said.

Pittsburgh stuck with Matt Murray in goal, who stopped all 25 shots he faced. He credited his teammates with limiting the Senators’ chances after building the early lead, allowing only 13 shots in the second and third periods combined.

“I think the majority of that is because we had the puck the whole time so we didn’t really have to defend,” Murray said. “We did a really good job staying on our toes and, when we didn’t have it, we were able to create a turnover rather than having to defend.”

And while captain Sidney Crosby led the Penguins’ Game 4 effort, Game 5 saw a different group rise – the third line of Rust, Nick Bonino and Carter Rowney, who combined for seven points. Rowney, a 28-year-old depth player who’s provided a spark when he’s been in the lineup, tallied three assists and took No. 1 star honors, along with the team’s postgame batting helmet.

“It’s fun to see him and the way he’s played, and it’s easy to get behind a kid like that, who’s had to work for everything he’s earned,” said forward Matt Cullen. “Since he’s come in the lineup, he’s been really good for us.”

The line credited their aggressive forecheck, ability to generate turnovers and willingness to dump the puck for finding ways around Ottawa’s defense.

“I think we’ve been looking at video pretty hard on ways to score,” Bonino said. “I think zone time hasn’t been an issue for us. The neutral zone hasn’t been as much of an issue as we thought it would; we’ve been able to get into their zone pretty well.

“Hats off to them. They defend hard; keep [us] to the outside. We looked at ways to get the pucks to the net and get guys to the net. I think a lot of our goals were that – right in the middle of the ice, with traffic. We came out and we executed the last couple of games.”

If the Penguins can execute that way against in Game 6, they’ll punch their ticket to the Stanley Cup Final for the second year in a row. But they’ll have to overcome recent history to avoid a Game 7; they’ve failed in their first attempts to close out both of their previous series this spring.

“It’s going to be a tough game going to Ottawa,” Maatta said. “We have experience that the game you’re going to close out the series is going to be the toughest. We’ve got to bring the same effort.”

And the Senators aren’t going anywhere quietly. Not even after a loss like this one.

“In the playoffs, just like the season, your ability to rebound from a great game or a really bad game is necessary. We’ve done it all year. After the fourth game against the Rangers, we were supposedly done. So, rebound and get ready for the next one.”